The Parliament Magazine: Khojaly genocide - a crime against humanity 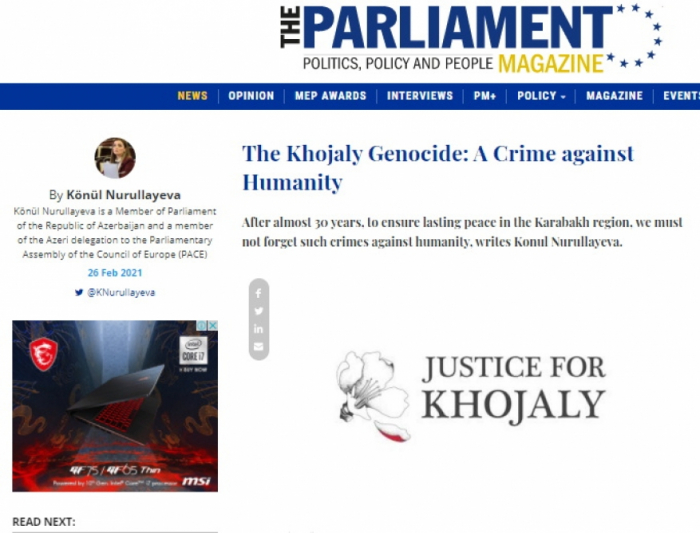 The article reads: “Khojaly is a city located in the Karabakh region of Azerbaijan. Khojaly has been under siege since October 1991, the start of the Armenia-Azerbaijan Karabakh War. On the night of February 25-26, 1992, Armenian armed forces destroyed the city of Khojaly with the support of armoured vehicles and soldiers of 366th Regiment, which stationed in nearby Khankandi since Soviet times. In just one night, 613 people, including 63 children, were killed. 8 families were fully destroyed, and 487 people were disabled. 1,275 civilians, including the elderly, women and children, were taken prisoner and subjected to unprecedented torture, humiliation, and insults. 56 people were killed with extreme cruelty, 3 were burnt alive, their scalps peeled off, their eyes taken out, and the bellies of pregnant women torn with bayonets. All of those victims were Azerbaijani.

The brutal killings were also documented by Human Rights Watch and the Memorial human rights organisation. Representatives of international media outlets visiting the site were horrified by what they saw. One of the most terrible tragedies of the 20th century took place in Azerbaijan. What happened in Khojaly was no different from the genocides seen in Khatyn, the Holocaust, Songmi, Lidice, Babi Yar, Rwanda, and Srebrenica, which all left a deep scar on world history.

One of the most terrible tragedies of the 20th century took place in Azerbaijan. What happened in Khojaly was no different from the genocides such as seen in Khatyn, the Holocaust, Songmi, Lidice, Babi Yar, Rwanda, and Srebrenica”

It is no coincidence that during his interview with the British journalist Thomas de Waal in 2000, the former Armenian President Serzh Sargsyan stated: “Before Khojaly, Azerbaijanis thought they were joking with us, they thought that Armenians were people who could not raise their hands against the civilian population. We had to put an end to all of this, so we did. We broke this stereotype of Azerbaijanis" (The note is taken from Thomas de Waal's book ‘Black Garden’).

This confession confirms that the crime against humanity in Khojaly was deliberate and well planned. Later, the Armenians admitted that the first major task of the Armenian armed forces was to destroy the Khojaly bridgehead, to evacuate the Asgaran-Khankandi road passing through, and to seize the airport controlled by the Azerbaijanis. It should be noted that Khojaly was the only city in the Karabakh region with its own airport.”