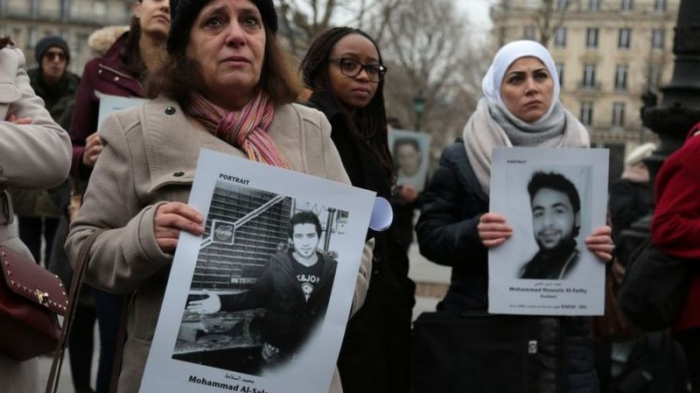 Tens of thousands of civilians are still missing after being detained arbitrarily during 10 years of civil war in Syria, UN investigators say.

Thousands more have been tortured or killed in custody, according to a new report detailing alleged war crimes and crimes against humanity by all parties.

Victims and witnesses described "unimaginable suffering", including the rape of girls and boys as young as 11.

The issue is a "national trauma" that must be addressed, the report says.

Syria has been devastated by a conflict that erupted after President Bashar al-Assad's government responded with deadly force to peaceful anti-government protests in March 2011.

The fighting has left at least 380,000 people dead and caused half the population to flee their homes, including almost six million refugees abroad.

The report by the UN Human Rights Council's Independent International Commission of Inquiry on Syria was based on more than 2,650 interviews and investigations into more than 100 detention facilities. It documents violations by almost every major party to the war that were apparently intended to intimidate and punish perceived opponents.

"The government forces' arbitrary detention of political opponents, journalists, human rights activists and demonstrators were both a root cause and a trigger of the conflict," the commission's chairman, Paulo Pinheiro, said.

"Armed groups and UN-designated terrorist organizations such as [Hayat Tahrir al-Sham] and [the Islamic State group] then also started depriving people of their liberty, committing heinous violations against them, often with sectarian undertones."

Former detainees described not seeing daylight for months, being forced to drink unclean water and eat mouldy food, sharing overcrowded cells without a toilet with hundreds of other people, and being denied medical care.

Those who were allegedly tortured or subjected to inhuman treatment in government-run prisons told investigators of at least 20 different methods used by security personnel to extract false confessions.

These included administering electric shocks, the burning of body parts, pulling off nails and teeth, and hanging people from one or two limbs for prolonged periods.

"They tortured me..., then the interrogator told me: 'We can kill you here and now, nobody will ever know'," recalled a man held by the government in Homs.

Survivors of torture described how they continued to suffer chronic physical pain and severe emotional suffering or post-traumatic stress disorder.

"I cannot live without diapers. I suffer from severe pain all over my body. There is no hope for me. My life is completely ruined," said a woman who alleged that she was tortured and raped at Military Security and Military Intelligence branches in Homs and Damascus.

The report also says detainees were frequently tortured at facilities run by Hayat Tahrir al-Sham, the jihadist alliance that dominates the last opposition stronghold in Syria.

Several men described being forced to strip naked, electrocuted on their genitals and raped. Female detainees reported being threatened with rape, and one woman was raped at a checkpoint in Hama.

Investigators were also told about the killings of detainees without trial, or following what the commission said were unfair trials in the government's counter-terrorism and field military courts or makeshift proceedings by opposition armed groups.

The exact number of detainees who have died in detention is unknown. But conservative estimates say tens of thousands of individuals have been killed while in government custody, according to the report.

Multiple sources indicate that, following the registration of deceased detainees at military hospitals, the bodies were buried in various mass graves, including two on the outskirts of Damascus, the report says.

The government and Hayat Tahrir al-Sham have denied torturing prisoners.

"Hundreds of thousands of family members have a right to the truth about their loved ones' fate," Mr Pinheiro said. "This is a national trauma that needs to be urgently addressed by action from the parties and the international community."

The commission of inquiry is urging all countries to pursue accountability for the crimes, pointing to last week's ground-breaking verdict in Germany, where a former Syrian government security official was found guilty of aiding and abetting crimes against humanity.