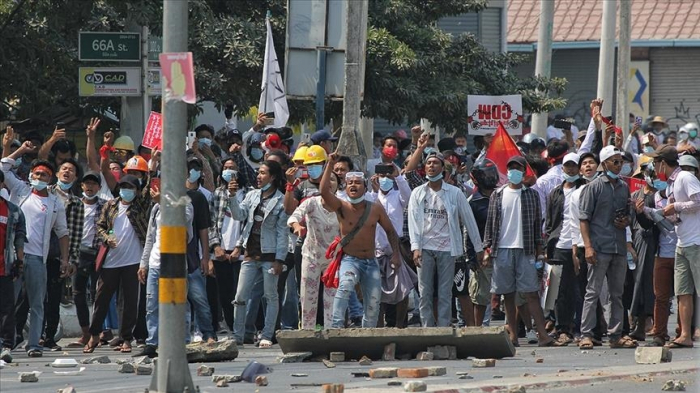 At least 37 people were killed and dozens were injured in Myanmar on Wednesday, the deadliest day since the military coup on Feb. 1, as police and security forces opened direct fire to disperse anti-coup protesters rallying across the country against the junta, AzVision.az reports citing Anadolu Agency.

In the face of violent repression by the police and security forces, a large number of people once again took to the streets in major cities and towns to demand the restoration of civilian rule.

Groups participating in nationwide protests on Wednesday reported that seven people died in Mandalay and one each in the towns of Magway and Myingyan as a result of the security forces' crackdown on protest rallies.

At least 22 people were killed in Yangon, the business hub of the country, when police and security forces used live fire and other forms of lethal force to disperse crowds protesting against Myanmar's military and calling for the restoration of democratic government.

In Yangon's North Okalapa township alone, the Khit Thit media outlet reported 11 deaths. While other media reports citing eyewitnesses claim that at least 40 people were injured in North Okalapa after police and security forces opened fire on the crowd during a tense situation.

According to reports in the media, two people were killed in Mandalay, Myanmar's second-largest city, as police and security forces used brutal tactics to deal with the unarmed protesters.

The reports say, seven people were killed in Monywa, the largest city in Sagaing Region, two in the Salin township of Minbu district in the Magway Division, one in Pyay town of the Bago region and one killed in Myingyan, a town in Mandalay.

Media outlets also reported two more deaths, with one in the town of Kalay in the central Sagaing region and the other in Mawlamyine, the capital of Mon state bordering Thailand.

A leader of a volunteer group based in Yangon confirmed the arrest of an MMSH member while providing medical assistance to the injured protester in the North Okalapa township.

"The MMSH member was severely injured in the head after being beaten by the police. However, we do not have any further information about them,” she told Anadolu Agency on the phone.

According to a witness who spoke to Anadolu Agency, police shot protesters even after apprehending them.

"I was very shocked to see that an unarmed protester was shot by the police after he was unable to defend himself," he said on the phone.

Footage showing police setting up temporary barricades in the northern Okalapa township of Yangon was also shared on social media.​​​​​​​

It was reported that the protester who died in Myingyan was a 14-year-old girl.

Approximately 300 protesters were detained after the clash between security forces and demonstrators in Yangon, according to these reports.

The Assistance Association for Political Prisoners (AAPP), a Myanmar-based human rights organization, revealed on Monday that police and security forces have detained, charged, or convicted 1,213 people in connection with the Feb. 1 military coup.

According to the AAPP, 913 people have been detained or charged as of Sunday, with four of them having been convicted by the courts.

The Association of Southeast Asian Nations (ASEAN) has called on all parties in Myanmar to seek a peaceful solution through constructive dialogue and practical reconciliation in the interests of the people and their livelihoods.

The special meeting of ASEAN foreign ministers led by Brunei Darussalam was held virtually to address the current political situation in Myanmar following the Feb. 1 coup and find an amicable solution to the ensuing crisis.

It also underscored the importance of Myanmar’s continued efforts in addressing the situation in the Rakhine state, including the start of the repatriation process in a voluntary, safe and dignified manner in accordance with its bilateral agreements with Bangladesh.