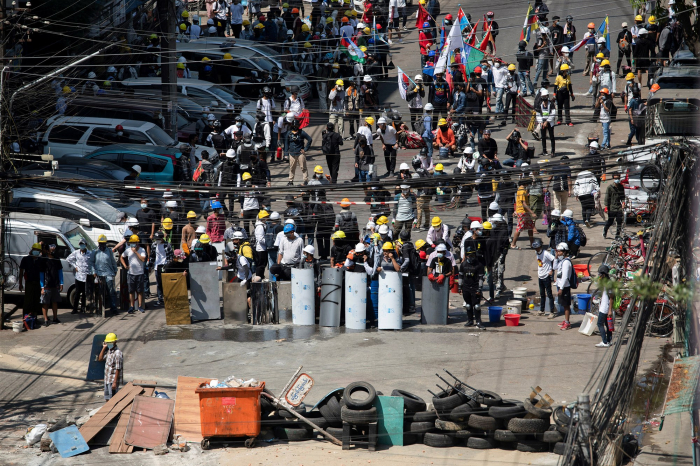 Police in Myanmar broke up demonstrations in several places with tear gas and gunfire on Thursday as protesters took to the streets again, undeterred by the rising death toll in a crackdown on opponents of last month's military coup.

The incidents came after security forces dramatically escalated their response to protests against the Feb. 1 military takeover, with the United Nations special envoy for the country saying 38 people had been killed on Wednesday.

The U.N. human rights chief, Michelle Bachelet, called on the security forces to halt what she called their "vicious crackdown on peaceful protesters."

"Myanmar's military must stop murdering and jailing protesters," Bachelet said in a statement.

The crackdown could galvanize the international community, which has responded fitfully so far to the violence.

Still, any kind of coordinated action at the United Nations will be difficult since two permanent members of the Security Council, China and Russia, would almost certainly veto it. Some countries have imposed or are considering imposing their own sanctions.

Videos from Wednesday also showed security forces firing slingshots at demonstrators, chasing them down and even brutally beating an ambulance crew.

Demonstrators have regularly flooded the streets of cities across the country since the military seized power and ousted the elected government of leader Aung San Suu Kyi.

Their numbers have remained high even as security forces have repeatedly fired tear gas, rubber bullets and live rounds to disperse the crowds, and arrested protesters en masse.

The intensifying standoff is unfortunately familiar in a country with a long history of peaceful resistance to military rule — and brutal crackdowns. The coup reversed years of slow progress toward democracy in the Southeast Asian nation after five decades of military rule.