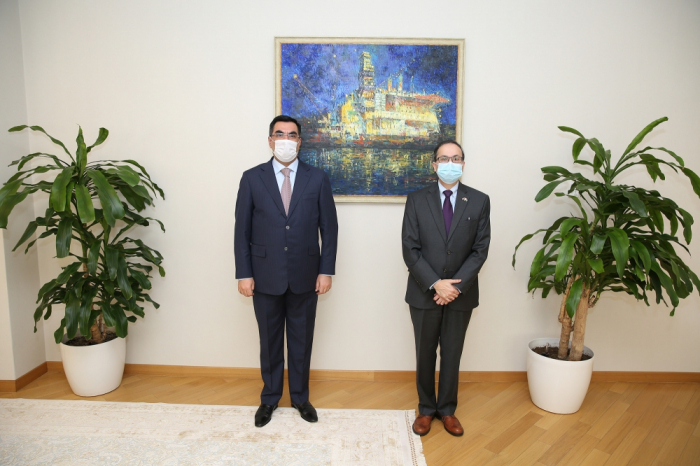 Rector of Baku Higher Oil School Elmar Gasimov has met with the newly appointed Ambassador of the Islamic Republic of Pakistan to Azerbaijan Bilal Hayee.

Elmar Gasimov underscored support constantly extended by Pakistan for Azerbaijan’s just stance and a thorough backing by Pakistan to Azerbaijan during the Patriotic War.

The Rector stressed the great potential for expanding cooperation between the two countries in the areas of culture, economy and education, and touched upon the ongoing bilateral relations. Speaking about the partnership between the two countries, Gasimov emphasized the importance of cooperation in the education sector. The Rector suggested offering scholarships to two Pakistani applicants and ensured that they would be able to study at Baku Higher Oil School starting from the next academic year.

During the meeting, Ambassador of Pakistan Bilal Hayee thanked the Rector for the warm welcome. He expressed satisfaction with his work as Ambassador to Azerbaijan carried out on the eve of the glorious victory in the Patriotic War under the leadership of Commander-in-Chief Ilham Aliyev. "In the challenging days of Azerbaijan, Pakistan has reaffirmed that it is a true friend and brother, and we are proud of that. Bilateral relations between the countries are being developed daily and we are in favour of further expanding cooperation in the education sector. We will be pleased with the offered training of specialists jointly with Baku Higher Oil School, which is leading in quality education, reputation and rating as well as the number of high-scoring competitive students. There are over 30 engineering universities in Pakistan. I was deeply impressed by a conducive leaning environment, top-notch facilities and professionalism of the academic staff at Baku Higher Oil School. I appreciate the accomplishments of BHOS gained within a short period of time," the Ambassador said.

The Ambassador extended his gratitude for the offered scholarship and noted that they would continue making vigorous efforts to expand bilateral cooperation in the education sector. The discussed issues also included cooperation between Baku Higher Oil School and Pakistani universities in training mobility programmes and exchange of researchers’ experience, joint research and training, and accreditation to the Pakistan Engineering Council.

The meeting was followed by a tour in the BHOS campus introducing its cutting-edge facilities.