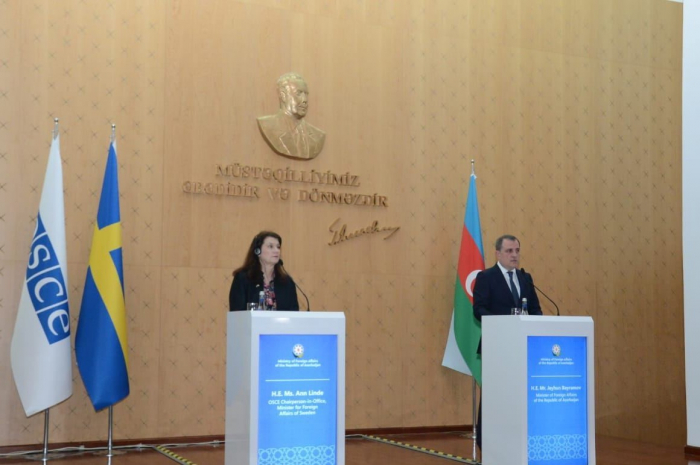 The new situation in the region and new transit opportunities can significantly enrich the dialogue between Azerbaijan and the OSCE, said the Azerbaijani Foreign Minister Jeyhun Bayramov at a press conference following a meeting with his Swedish counterpart, OSCE Chairperson-in-Office Ann Linde.

Azerbaijani FM Jeyhun Bayramov informed his Swedish counterpart about the liberation of the Azerbaijani lands from the Armenian occupation during the 44-day Nagorno-Karabakh war.

"Azerbaijan supports the Helsinki Final Act, the normalization of relations between the two countries on the basis of territorial integrity and inviolability of borders. The peace statements signed on November 10, 2020, and January 11, 2021, ensure the establishment of peace in the South Caucasus region. The projects implemented between the OSCE and Azerbaijan can make a significant contribution to the stabilisation of the situation in this area. There are important opportunities in the post-war period in mine clearance, building trust between communities and other areas", Bayramov stated.