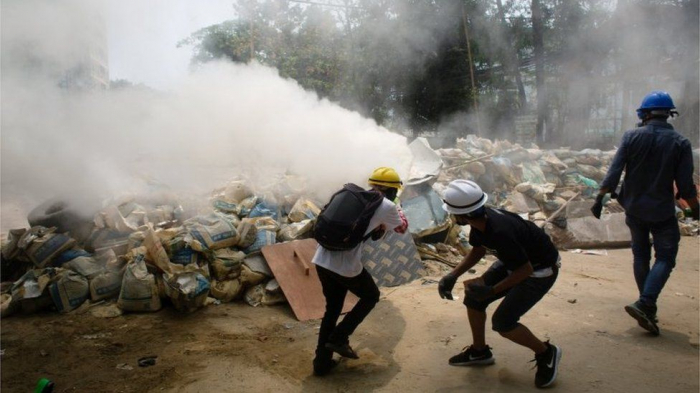 Myanmar's military has imposed martial law across more districts around the country following the deadliest day of protests since February's coup.

About 50 people were reported killed when troops and police opened fire on protesters in various areas on Sunday. Most deaths were in Yangon.

The violence came a day before ousted civilian leader Aung San Suu Kyi was due to appear in court.

On Monday, her virtual hearing was adjourned due to internet problems.

Pro-democracy protesters are demanding the release of Ms Suu Kyi, the head of the National League for Democracy (NLD) which saw a landslide victory in elections last November. She has been held at an unknown location since the 1 February coup.

She is due to face a slew of charges her supporters say are fabricated.

The military detained most of the NLD leadership after the coup, alleging voter fraud. No proof has been provided.

The military initially declared martial law in two districts of Yangon (Rangoon), the country's largest city, on Sunday after Chinese businesses were attacked. Martial law was imposed in several other areas of Yangon and Mandalay on Monday. Protesters there can now be tried in military courts.

Protesters believe China is giving support to the military in Myanmar (also called Burma) but it is unclear who was behind the weekend attacks.

Most of Sunday's casualties were reported in Yangon.

In total, more than 120 protesters have been killed during the crackdown, according to the Assistance Association for Political Prisoners (AAPP) monitoring group.

On Monday there were fresh protests in Mandalay and a number of other locations. Casualties were reported after security forces opened fire on protesters in the central towns of Myingyan and Aunglan.

What is Ms Suu Kyi charged with?
The ousted civilian leader is facing charges including "fear and alarm", illegally possessing radio equipment, and breaking Covid rules.

The charges against Ms Suu Kyi carry sentences of several years in jail and could also lead to her being barred from running in future elections if convicted.

Some of the ousted MPs have refused to accept last month's coup and have gone into hiding, forming a new group, the CRPH, or Committee for Representing the Union Parliament.

In his first public address, their leader Mahn Win Khaing Than urged protesters over the weekend to defend themselves against the military crackdown during what he called a "revolution".

"This is the darkest moment of the nation and the moment that the dawn is close," he said, adding: "The uprising must win."

The military considers the CRPH illegal, warning that anyone co-operating with them will face treason charges.