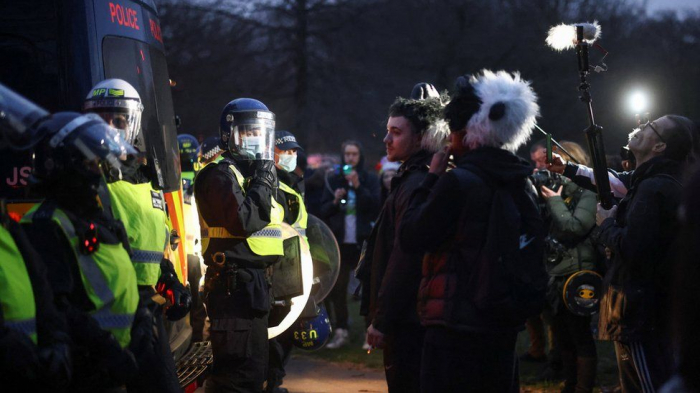 Thousands of people have attended anti-lockdown demonstrations in London, after MPs urged the government to allow peaceful protest during lockdown.

Crowds marched from Hyde Park to Westminster, with at least 33 arrests by police, mostly for Covid breaches.

The Home Office said it was still illegal for people to attend protests under the current coronavirus rules.

Deputy Assistant Commissioner Laurence Taylor told the BBC more people than previously expected were at Saturday's protests, but the Met has not given a formal estimate of the number in attendance.

BBC correspondent Marianna Spring, reporting from the anti-lockdown protests, said the atmosphere was "animated" and a number of people appeared to be angry about restrictions on peaceful protest.

Later, in Hyde Park, police officers were forced to run back to their vans, as protesters threw bottles and cans at them.

PA Media reported that some members of the public then left the park, with small children carried by their parents.

The anti-lockdown protests came after a vigil following the death of Sarah Everard in south London last week resulted in arrests, as police enforced Covid and public order laws.

Earlier, more than 60 MPs and peers wrote to the home secretary calling for laws to be changed to allow peaceful protests during lockdown.

Liberal Democrat leader Sir Ed Davey blamed the scenes at the Clapham event on a lack of clarity putting police "in an impossible position", adding that the right to protest was a "basic freedom".

Thousands of tightly-packed anti-lockdown protesters marched up Whitehall with some chanting "freedom" to the beat of a drum.

One man carried a placard bearing the words "no more NHS and Gov lies".

I have seen very few demonstrators wearing masks and there's no attempt at social distancing. So far the police - who are here in large numbers - have been taking a hands-off approach, though I have seen at least one arrest on Whitehall.

Among the crowd there are undoubtedly some conspiracy theorists, with some accusing the mainstream media of pushing fake news. But that is by no means everyone here.

One woman, who did not want to be named, told me she knew Covid was bad. "I had it myself last March," she said. "But this lockdown is too much."

The initial organisers of the Sarah Everard vigil effectively lost a High Court battle to hold it lawfully the day before, resulting in its cancellation.

But hundreds attended Clapham Common to gather around tributes left on a bandstand - the Met Police said the gathering became unlawful after people began delivering speeches to the crowd.

The event also increased interest in plans to give officers more precise powers to restrict demonstrations in a new sweeping Police, Crime, Sentencing and Courts Bill debated by MPs.

Sir Patrick Vallance, the UK's chief scientific adviser, told MPs earlier this month that protests elsewhere had not resulted in a spike in infections and that outdoor gatherings were safer than indoors, though not risk free.

He said: "It is the case that it is difficult to see how things like large beach gatherings and so on can cause a spike. The same was the case in a protest march in New York; they did not really see any spikes after that.

"It is lower risk, but the other thing that can happen with outdoor events, and so on, is that, when indoor things are also open, you start to get people congregating indoors around that. That can increase risk, but outdoors itself is lower risk."