Global Ambassador's Journal: Azerbaijan as an ancient center of trade and transport 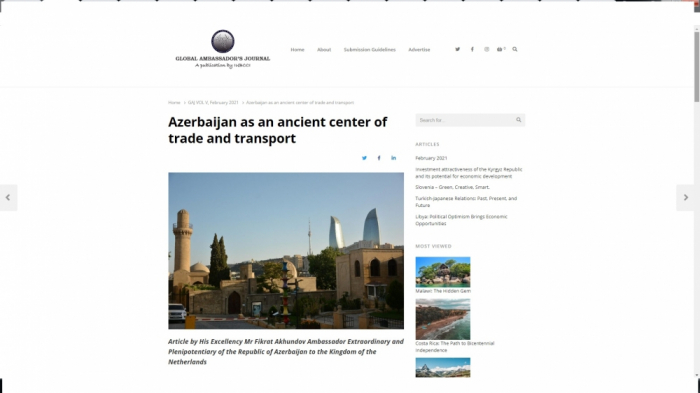 Global Ambassador's Journal has published an article by Ambassador of the Republic of Azerbaijan to the Kingdom of the Netherlands Fikrat Akhundov headlined “Azerbaijan as an ancient center of trade and transport”.

The article reads: “For centuries, Azerbaijan has been a center of transport and trade in the South Caucasus region due to its strategic geographic location. This beautiful country is in a favorable position at the crossroads of Europe and Asia, where the Eastern traditions meet Western values.

Many centuries ago, the famous Great Silk Road passed through Azerbaijan. Through this Silk Road, thousands of camels’ caravans traveled yearly, carrying silk, spices, and exquisite goods from Asia’s exotic countries to Europe. Even nowadays, you can find traces of the Silk Road all over Azerbaijan, starting from folk literature which would tell stories of these caravans, ending with still intact preserved local “karvansaray”s. Karvansarays, which means “palace of caravans” in Azerbaijani, are medieval hotels where passengers of caravans of the camel would lodge. These karvansarays, which can be found in Azerbaijani cities, such as Baku, Shaki, etc., serve today as museums, and in some cases, they have been modernized and utilized as hotels.

Loyal to its ancient history and traditions, Azerbaijan takes an active part in reconstructing the Great Silk Road in the South Caucasus region. The international transport corridors, such as East-West, North-West, North-South, and South-West, which pass through the country, development of Baku port are all parts of the policy of the Azerbaijani government to reconstruct the historic Great Silk Road and to contribute to the development of trade and transport in the whole Caucasus region.

It should be noted that Baku Port deserves special attention in the transport infrastructure of Azerbaijan. This is because, traditionally, Azerbaijan is a landlocked country. However, this rapidly developing country is situated at the Caspian Seashore, the largest lake globally. Therefore, despite being landlocked, maritime transport has also been a part of Azerbaijani history. Baku port itself dates back to the 1500s. During the early 20th century, Baku port was among the world’s leading ports for cargo and passenger traffic. The current Port of Baku, inaugurated in 2018, is located in Alat settlement, about 70 km south of capital city Baku. This port is situated at the crossroads of the modern Silk Road, major transportation corridors (East-West and North-South), and Azerbaijan’s central railway and highway networks. Azerbaijani Government has also established a Free Economic Zone in Alat settlement, where Baku port is located. Thus, Baku Port aims to become the leading intermodal logistics hub at the heart of Eurasia. In 2019, the Port of Baku became the first port in the Caspian region to be awarded the European Sea Ports Organization (ESPO)’s PERS -“EcoPorts” certificate, which attests to its high standards. Baku Port can currently handle approximately 15 million tons of general cargo per year, including 100.000 TEU in containers. It should be noted that these figures are provisional because the development work of the port is still ongoing.

There are also new realities and opportunities for connecting the Caspian sea countries with the Black sea region through Azerbaijani territory by railway. A major trade and transport route passing through Azerbaijan is, without doubt, the East-West transport route. Baku-Tbilisi-Kars railway, also known as “Iron Silk Road,” which passes through this transport route, was inaugurated in 2017. It is worth noting that the Baku-Tbilisi-Kars railway is the shortest and most reliable road connecting Europe with Asia. The value of these railways was especially remarkable during the COVID-19 pandemic in the world. This regional infrastructure project, implemented under Azerbaijan’s leadership, makes it possible today to transport cargo from Turkey to China via the territory of Georgia, Azerbaijan, and Kazakhstan. The first container train, carrying loads from Istanbul, Turkey to Xi’an, China, through the Baku-Tbilisi-Kars railway, arrived in Port of Baku on 10 December 2020. It passed through 2 continents, two seas and five countries, and 8693 km. Starting from 2021, these cargo trains will transport goods on a twice a monthly basis.

Another critical transport project is the North-South transport corridor, which aims to reduce cargos’ delivery time from India to Russia and Northern and Western Europe. To develop this transport corridor, Azerbaijan has invested in constructing a railway bridge over the Astara River, which connects Azerbaijan and Iran border. Azerbaijani Government has also financed connecting railway stations on the Azerbaijani–Iranian border. It is envisaged that, after the implementation of this project, the cargo transportation from the Persian Gulf to Russia, as well as to the countries of Eastern and Northern Europe, will become more efficient. The North-South international transport corridor is of great political and economic importance for Azerbaijan, as it would allow for a significant increase in cargo and passenger transportation. The volume of expected cargo traffic along the corridor is envisaged at the first stage to be 5 million tons per year and in the future 10 million tons.

It is worth mentioning that the Secretariat of TRACECA (International Transport Corridor Europe – the Caucasus – Asia) is also located in Baku, the capital city of Azerbaijan. In May 1993, together with trade and transport ministers of Caucasian and Central Asian countries, aims to help restore countries’ transport infrastructure in the South Caucasus and Central Asia.

It should be noted that Azerbaijan has been among the first countries that have supported China’s “One Belt, One Road” initiative. MoU on mutual encouragement of the Silk Road Economic Belt was signed in 2015. Azerbaijani Government intends to integrate transport and transit corridors of Azerbaijan into the “One Belt, One Road” project, which would ultimately benefit the whole Caucasus region.

Finally, Karabakh’s liberation and seven surrounding Azerbaijan districts from the Armenian occupation and the signature of a trilateral agreement between Azerbaijan, Armenia, and Russia on 10 November 2020 have created new trade and transit opportunities in the region. This has paved the way for the restoration of transport communication in the area, which will serve the interests of Azerbaijan, Turkey, Russia, Georgia, Iran, and Armenia and ensure more diversified transportation corridors.”