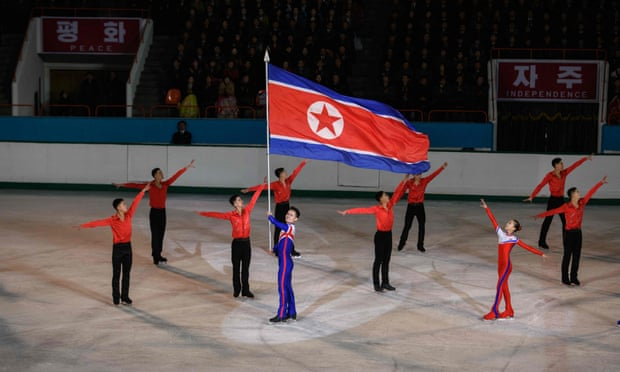 North Korea’s sports ministry said on Tuesday that it will not participate in the Tokyo Olympics this year to protect its athletes amid the coronavirus pandemic, AzVision.az reports citing the Guardian.

The decision was made at a meeting of North Korea’s Olympic committee, including its sports minister Kim Il guk, on 25 March the ministry said on its website, called Joson Sports. “The committee decided not to join the 32nd Olympics Games to protect athletes from the global health crisis caused by the coronavirus,” it said.

North Korea has one of the world’s strictest quarantine regimes, despite the government’s denial that any cases have been detected in the country.

The measures have allowed the government to increase its control over daily life to levels similar to the famine years of the 1990s, according to analysts.

Outsiders doubt whether the country has escaped the pandemic entirely, given its poor health infrastructure and a porous border it shares with China, its economic lifeline.

Describing its anti-virus efforts as a “matter of national existence”, North Korea has severely limited cross-border traffic, banned tourists, jetted out diplomats and quarantined tens of thousands of people who have shown symptoms.

Japan’s prime minister, Yoshihide Suga, has previously said he expected to invite US president Joe Biden to the Olympics and was willing to meet North Korean leader Kim Jong-un or his powerful sister, Kim Yo-jong, if either attended the Games. Suga, however, did not say if he would invite either of them.

South Korea‘s Unification Ministry on Tuesday expressed regret at the North’s decision, saying it had hoped the Tokyo Olympics would provide an opportunity to improve inter-Korean relations, which have declined amid a stalemate in wider nuclear negotiations between Washington and Pyongyang.

North Korea sent 22 athletes to the 2018 Winter Olympics in South Korea, along with government officials, performance artists, journalists and a 230-member cheering group.

The contingent included Kim Yo-jong, a move that helped it initiate diplomacy with South Korea and the US. That diplomacy has stalled since and North Korea‘s decision to sit out the Tokyo Olympics is a setback for hopes to revive it.

The Olympics are hugely unpopular in Japan, with up to 80% of Japanese wanting the Games cancelled or postponed again. The games were originally scheduled to take place in 2020 but were postponed due to the coronavirus pandemic. This year, the government announced that it would ban overseas spectators.

With just over 100 days to go, Japanese health authorities are concerned that variants of the coronavirus are driving a nascent fourth wave.

The variants appear to be more infectious and may be resistant to vaccines, which are still not widely available in Japan. Osaka is the worst-affected city. Infections there hit fresh records last week, prompting the regional government to start targeted lockdown measures for one month from Monday.

A mutant Covid variant first discovered in Britain has taken hold in the Osaka region, spreading faster and filling up hospital beds with more serious cases than the original virus, according to Koji Wada, a government adviser on the pandemic.

“The fourth wave is going to be larger,” said Wada, a professor at Tokyo’s International University of Health and Welfare. “We need to start to discuss how we could utilise these targeted measures for the Tokyo area.”

Osaka city cancelled Olympic Torch relay events there, but the Japanese prime minister, Yoshihide Suga, has insisted Japan will carry out the Games as scheduled. Suga said on Sunday that measures employed in the Osaka area could be expanded to Tokyo and elsewhere if needed.

In response to the announcement from North Korea, a spokesperson for the Australian Olympic Committee told the Guardian it was “continuing its detailed preparations to send the Australian Olympic Team to the Tokyo Olympic Games” and that it had “full confidence” in the efforts of organisers “to deliver the Games with athlete safety as the highest priority”.

There were 249 new infections in Tokyo on Monday, still well below the peak of over 2,500 in January. In Osaka, the tally was 341, down from a record 666 cases on Saturday. Japan has confirmed a total of nearly nearly 490,000 infections since the start of the pandemic, according to the Johns Hopkins University tracker. The death toll stands at 9,227.