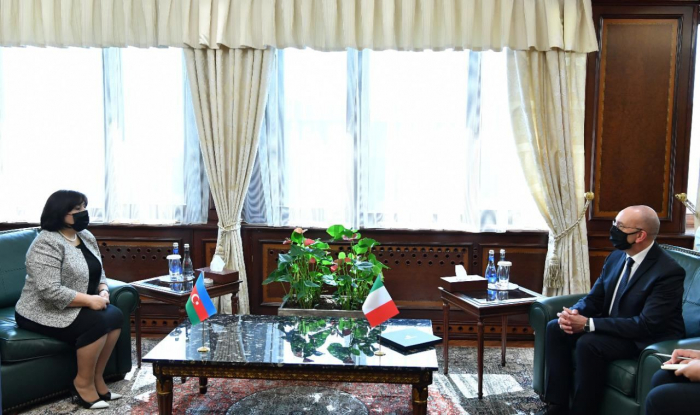 Chairperson of the Azerbaijani Parliament Sahiba Gafarova met with Vito Petrocelli, Chairman of the Standing Committee for External Relations of the Senate (upper house of parliament) of Italy on April 12, the parliament's press service told AzVision.az.

Having greeted the guest, Gafarova noted that this visit will serve to intensify the inter-parliamentary cooperation.

“The cooperation between Azerbaijan and Italy, based on ancient historical roots, has moved to a qualitatively new level after the restoration of Azerbaijan’s independence,” Gafarova emphasized.

“The mutual visits of the presidents of the two countries and the negotiations held by them played a significant role in achieving the current high level of bilateral ties, a reliable legal basis for which is ensured by the signed bilateral documents,” she said.

“Not only political and economic, but also cultural, humanitarian, academic and educational ties and cooperation between the two countries are at a high level,” Gafarova said. “The projects implemented by First Vice-President of Azerbaijan Mehriban Aliyeva in Italy as President of the Heydar Aliyev Foundation and Goodwill Ambassador of ISESCO and UNESCO are well known to the general public.”

“Such projects serve to further intensify the relations between our countries and peoples,” the parliament speaker said.

"The role of the two parliaments in the development of Azerbaijan-Italy relations is also great,” she said. “Over the past years, close cooperation of the Azerbaijani parliament with both chambers of the Italian Parliament has been formed. Friendship groups operate in both parliaments. Inter-parliamentary ties are being more strengthened thanks to the mutual high-level visits."

Gafarova also informed the guest about the victory of Azerbaijan in the second Armenia-Azerbaijan Nagorno-Karabakh War.

Stressing that many Italian parliamentarians expressed their support for the fair cause of Azerbaijan, Gafarova said that Armenia had inflicted great destruction and committed acts of vandalism in the Azerbaijani districts, which it had been holding under occupation for almost thirty years.

“Cities, houses, villages, as well as monuments of history, culture and religion, were completely destroyed,” she said. “Unfortunately, Armenia will not give up its criminal activity in any way. Despite all appeals, it continues to violate the principles of international law, refusing to hand over minefield maps to the Azerbaijani side.”

“As a result, after the war, many Azerbaijani civilians and military personnel were killed and wounded as a result of these mines,” Gafarova noted.

"The international community must speak out against such steps that threaten peace and security," she added.

Today relations between Azerbaijan and Italy are at a very high level, cooperation in the energy sector is of particular importance.

Petrocelli pointed out the most important role of Azerbaijan in ensuring the energy security of Europe.

The guest said that the bilateral relations are at a high level between the Italian and Azerbaijani parliaments.

During the meeting, the sides also exchanged views on other topics of mutual interest.