Azerbaijan has always been interested in settlement of conflict, says President Aliyev 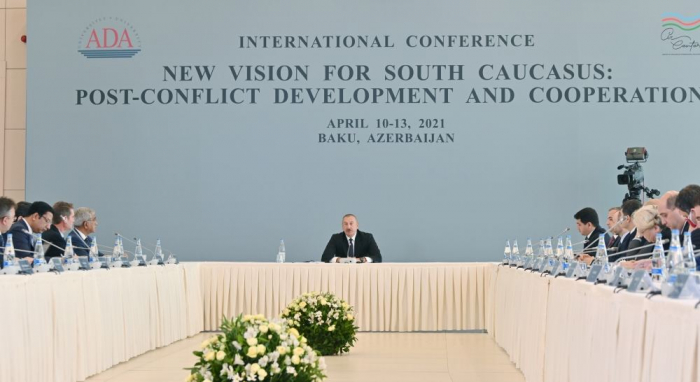 Azerbaijan was always interested in finding the soonest solution to the conflict, Azerbaijani President Ilham Aliyev said during his speech at the ‘A New Look at the South Caucasus: Post-Conflict Development and Cooperation’ conference at ADA University in Baku on April 13, 2021, AzVision.az reports.

“Azerbaijani position was constructive. Azerbaijan was always interested in finding the soonest solution to the conflict, because we were the suffering side. I had a strong feeling during the negotiations that Armenia doesn't want a solution. They say they do, but they do everything not to have this solution,” the head of state said.

“So, when we liberated those territories, those fortifications, those hundreds of millions of dollars in investments, in mining, in building these defense lines, we clearly understand that they were doing it to keep these lands under occupation forever,” Azerbaijani president said.

“The president went on to say that the tactics of the previous Armenian government were to have some kind of process, imitate talks, to agree on some things, disagree on some other things, and when it comes to making a decisive step - take a step back,” the head of state said.