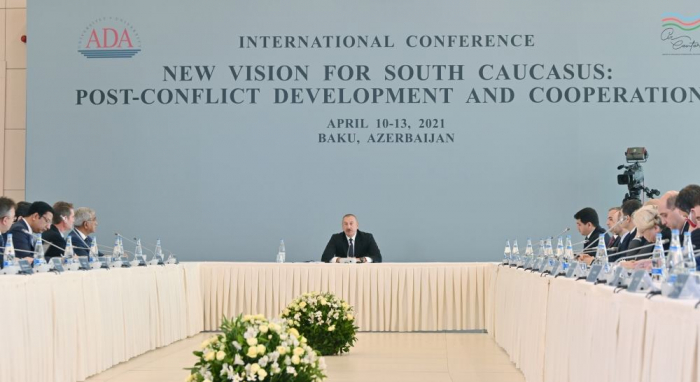 I think we need to be more active, here and in Yerevan, try to build bridges. Of course, if Armenia wants that, Azerbaijani President Ilham Aliyev said during his speech at the ‘A New Look at the South Caucasus: Post-Conflict Development and Cooperation’ conference at ADA University in Baku on April 13, 2021, AzVision.az reports.

“It is difficult to predict how Armenians and Azerbaijanis will interact in the future. I think, it will, to a large degree, depend on the will and political wisdom of politicians. I think we need to be more active, here and in Yerevan, try to build bridges. Of course, if Armenia wants that. We don't know what are their intentions. They never elaborated on that. I already on several occasions made it clear that we consider the page of the conflict turned,” the head of state said.

“I've already said it a couple of times, about a possible peace agreement with Armenia. These are our plans. But we don’t have any messages of this kind from the Armenian side. So we cannot establish this interaction unilaterally. Our position is clear - we're ready for that. It will not be easy,” President Aliyev said.