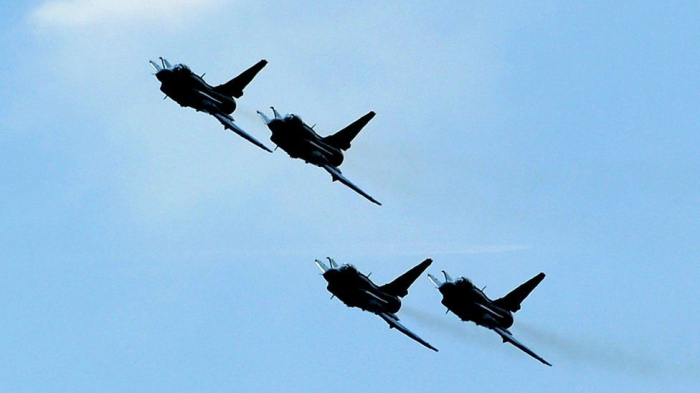 Taiwan has said a record number of Chinese military jets flew into its air defence zone on Monday.

The incursion is the largest in a year and comes as the US warns against an "increasingly aggressive China".

However, democratic Taiwan sees itself as a sovereign state.

The defence ministry added they dispatched combat aircraft to warn the Chinese jets, while missile systems were deployed to monitor them.

China has carried out regular flights over the international waters between the southern part of Taiwan and the Taiwanese-controlled Pratas Islands in the South China Sea in recent months.

Monday's incursion also saw the jets fly into the ADIZ to the south-west of Taiwan near the Pratas Islands.

Map
The latest incident came a day after US Secretary of State Antony Blinken said the United States was concerned about China's "increasingly aggressive actions" towards Taiwan.

In an interview with NBC he reiterated that the US had a legal commitment to Taiwan and said Washington would "make sure Taiwan has the ability to defend itself", adding that it would be a "serious mistake for anyone to try to change the status quo by force".

The news of China's nuclear-capable bombers flying every closer to Taiwan, in larger numbers each time, has left the world wondering what Beijing is doing.

There's been speculation ranging from intimidation to a trial run for an actual attack.

Some have also seen it as China pushing back against the United States which has been boosting links with Taipei and moving its navy around the region.

However, each time Chinese jets fly these missions, they are pushing the line in terms of where the limit might be that would prompt a more deadly response from Taiwan's armed forces.

There is much we don't know about Beijing's intentions and much analysis has been guess work but here is something that we do know.

If you look at the Taiwan-related propaganda inside mainland China it is clearly ramping up, celebrating the might of the PLA air force and decrying enemies on this rogue island.

The most concerning thing is the possibility that this is being used to gradually soften-up the population to the idea of an actual invasion of Taiwan.

Analysts say Beijing is becoming increasingly concerned that Taiwan's government is moving the island towards a formal declaration of independence and wants to warn President Tsai Ing-wen against taking steps in that direction.

President Tsai, however, has repeatedly said that Taiwan is already an independent state, making any formal declaration unnecessary.

The island has its own constitution, military, and democratically elected leaders.

China has not ruled out the possible use of force to achieve unification with Taiwan.