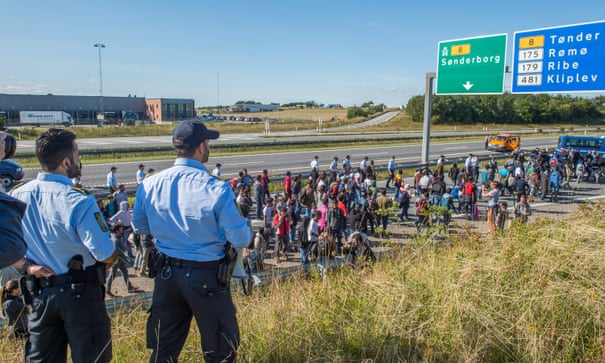 Denmark has become the first European nation to revoke the residency permits of Syrian refugees, insisting that some parts of the war-torn country are safe to return to.

At least 189 Syrians have had applications for renewal of temporary residency status denied since last summer, a move the Danish authorities said was justified because of a report that found the security situation in some parts of Syria had “improved significantly”.

About 500 people originally from Damascus and surrounding areas were being re-evaluated.

The issue has attracted widespread attention since 19-year-old Aya Abu-Daher, from Nyborg, pleaded her family’s case on television earlier this month, moving viewers as she asked, holding back tears, what she had “done wrong”.

“The Danish Refugee Council disagrees with the decision to deem the Damascus area or any area in Syria safe for refugees to return to – the absence of fighting in some areas does not mean that people can safely go back. Neither the UN nor other countries deem Damascus as safe.”

After 10 years of war, Bashar al-Assad is back in control of most of Syria, and frontline fighting is limited to the north of the country. However, one of the main reasons people rose up during the Arab spring remains his secret police.

Regime intelligence branches have detained, tortured and “disappeared” more than 100,000 people since the war broke out in 2011. Arbitrary detentions are widespread in formerly rebel-held areas that have signed reconciliation agreements with Damascus, according to Human Rights Watch.

Areas under the regime are unstable. There has been next to no rebuilding, services such as water and electricity are scarce, and last year’s collapse of the Syrian pound has sent food prices rocketing by 230%.

Hiba al-Khalil, 28, who left home on the refugee trail through Turkey and Greece before settling in Denmark in 2015, said: “I told the interviewer, just being outside Syria for as long as I have is enough to make you look suspicious to the regime. Just because your city isn’t being bombed with chemicals anymore doesn’t make it safe … Anyone can be arrested.”

The trainee journalist added: “I was so happy to get to Denmark. I came here to work and study and make a new life. I’ve learned the language very well. Now I am confused and shocked it was not enough.”

Khalil had been called back for a second immigration interview this week and was not sure what would happen next or how she would afford a lawyer to appeal if her application renewal were rejected.

According to Refugees Welcome Denmark, 30 Syrians have already lost their appeals – but since Copenhagen does not have diplomatic relations with Damascus it cannot directly deport people to Syria.

At least some of the rejected applicants have been placed in a detention centre, which campaigners said amounted to a prison where residents could not work, study or get proper healthcare.

Syrian men are generally exempt from the new policy because the authorities recognise they are at risk of being drafted into the Syrian military or punished for evading conscription. The majority of affected people appear to be women and older people, many of whom face being separated from their children.

The parents of Mahmoud al-Muhammed, 19, both in their late 60s, had their appeal to stay in Denmark rejected, despite the fact Muhammed’s father retired from the Syrian military in 2006 and threats were made against him when the family left the country.

“They want to put my parents in a detention centre for maybe 10 years before Assad is gone,” he said. “They both have health problems. This policy is cruel. It is designed to make us so desperate we have to leave.”

The Scandinavian country’s reputation for tolerance and openness has suffered in recent years with the rise of the far-right Danish People’s party. The centre-left coalition in government, led by the Social Democrats, is in competition with the right for working-class voters.

The new stance on Syrian refugees stands in stark contrast to neighbouring Germany and Sweden, where it is much easier for the larger Syrian populations to gain permanent residency and eventually citizenship.

As well as stripping Syrians of their residency permits, the Danish government has also offered funding of about £22,000 per person for voluntary returnees. However, worried for their safety, in 2020 just 137 refugees took up the offer.

Danish authorities have so far dismissed growing international criticism of the new policies from the UN and rights groups.

The immigration minister, Mattias Tesfaye, told Agence France-Presse: “The government’s policy is working and I won’t back down, it won’t happen. We have made it clear to the Syrian refugees that their residence permit is temporary and that the permit can be revoked if the need for protection ceases to exist.”

“It is pointless to remove people from the life they are trying to build in Denmark and put them in a waiting position without an end date,” Slente of the Danish Refugee Council said. “It is also difficult to understand why decisions are taken that cannot be implemented.”