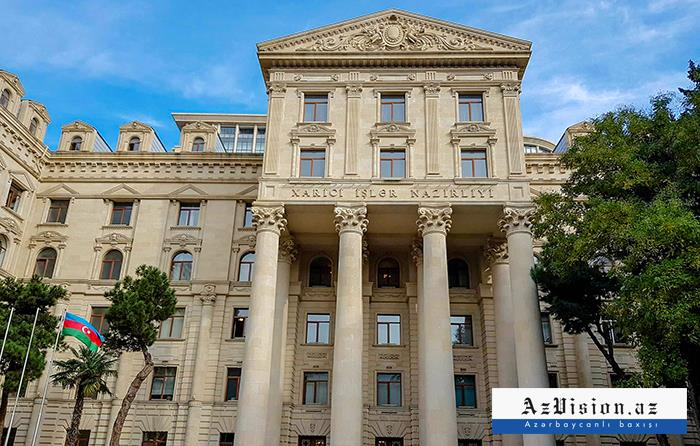 Azerbaijan’s Foreign Ministry has issued a statement on the 35th Anniversary and the International Chernobyl Disaster Remembrance Day.

"On the occasion of 35th International Chernobyl Disaster Remembrance Day, we express our solidarity with the countries as well as all people affected by this tragedy.

The nuclear accident at Chernobyl, near Pripyat in the northern part of Ukraine in 1986 was a humanitarian tragedy on an enormous scale. The explosion released large quantities of radioactive materials into the atmosphere causing contamination of varying degrees in Ukraine, Belarus, and Russia. It was one of the most serious nuclear accidents, exposing several hundreds of thousands of people to high levels of radiation and forcing about 350,000 to leave their homes from contaminated areas. 31 people perished immediately and between 4000 and 27000 people died as a result of radiation exposure. Many people living hundreds of kilometers from the explosion site fell ill with radiation in the aftermath of the disaster.

Azerbaijan, along with some other countries actively participated in the mitigation of the consequences of the accident by sending more than 7000 rescuers and other personnel immediately to the area. Azerbaijan temporarily hosted about 7000 people affected by the accident and provided them with essential rehabilitation and treatment. Azerbaijan paid enormous human costs, approximately 5000 persons are currently suffering from the consequences of the Chernobyl accident in Azerbaijan and an estimated 2000 citizens affected by the Chernobyl accident have since passed away.

The Chernobyl accident had a profound impact on the nuclear industry, leading to increased cooperation on safety and the adoption of new legal instruments. Most crucially, it focused global attention on safety and the importance of human and organizational factors in achieving these changes. The far-reaching effect of this disaster has proven that the safety of nuclear power plants should concern not only the states in which they are located but also nearby countries that may be affected by potential risks.

In this context, risks associated with the Metsamor (NPP) in Armenia need to be thoroughly addressed by the international community. This NPP was built in the years 1976-1980 with similar technology used in Chernobyl and is located in an active seismic zone. The fateful combination of outdated technology and location place Metsamor among the most dangerous nuclear plants in the world. Despite continuous warnings by various international organizations calling the facility “a danger to the entire region,” Armenia still continues to exploit Metsamor NPP beyond its operational life span.

In 2020 the European Union once again urged Armenia to close the plant, it said the plant “cannot be upgraded to fully meet internationally accepted nuclear safety standards, and therefore requires an early closure and safe decommissioning”.

Using out-of-date technology and not following safety instructions during the operation of the Metsamor poses serious environmental problems for the wider region.

Furthermore, repeated incidents of smuggling of nuclear materials such as highly enriched uranium raise additional concerns regarding proper physical protection of the plant and its nuclear materials.

On this day of commemoration, we call upon all relevant international organizations, civil society institutions active in nuclear safety and environmental issues, as well as regional countries to raise public awareness of preventing a potential disaster and to mobilize their efforts in advocating for the suspension of Metsamor NPP."