Is there an antidote to 'digital intensity'? - iWONDER 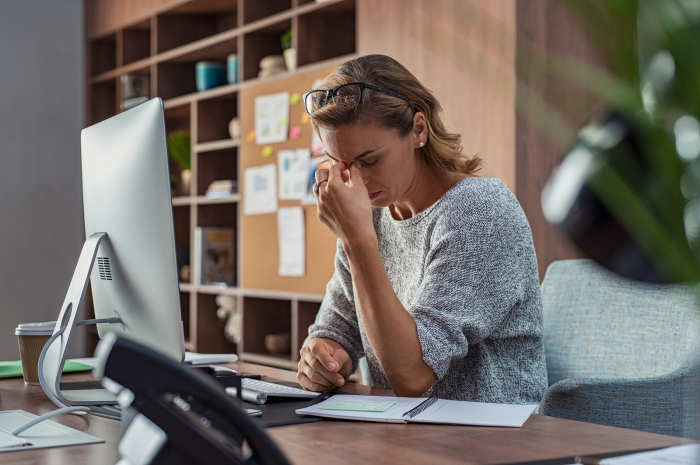 Since the pandemic hit, we’ve been using more digital tools to work longer hours, creating a cognitive load that’s tough on our brains. How do we fix that?

Late last year, a tweet from BuzzFeed trends editor Delia Cai went viral: “Another day of staring at the big screen while scrolling through my little screen so as to reward myself for staring at the medium screen all week,” she joked.

It seems right on. More than a year into the pandemic, we are glued to our screens. And it’s not only about binging movies and scrolling through TikTok. As remote work has set in, we’re relying entirely on digital tools to keep in touch with each other and get our work done.

This all-virtual-all-the-time nature of our every day has led to a worrisome spike in ‘digital intensity‘. It’s not just that we’re increasingly using digital tools to work; it’s that we’re also using digital tools more to work more. A new survey from Microsoft tracked the habits of more than 30,000 users in 31 countries over the last year, and the results are alarming.

The numbers track with Spataro’s personal experience. He and his team are certainly spending more time in front of their screens. Employees, he says, are attending more and more meetings – sometimes unnecessarily – just to demonstrate they’re present and engaged. Spataro says he’s also “having more one-on-ones than I’ve ever had in my life”, which he attributes to “a base principle: humans crave connection”.

All this plugged-in time is creating a cognitive load that’s tough on our brains. There are some short-term fixes that can help alleviate this digital intensity, but the issue is also driving a larger conversation about what communication – and our jobs in general – should look like in a whole new world of work.

Of course, it makes sense that the shift to remote work has meant more time in front of screens. Meetings used to take place in person; now our only option is virtual interaction.

Kate Lister, president of Global Workplace Analytics, a San Diego-based remote work consultancy, cautions that some of the numbers in the Microsoft study should be taken with a pinch of salt. “The criticism is: of course, Teams is being used more now; nobody was using it before,” she says. Working from home naturally requires virtual tools, so the increased usage of Microsoft’s video conferencing app (or similar increases for platforms such as Zoom) is to be expected.

In real life, our brains aren’t wired to look at a flat image of a person on a grid – Michael Bohan
But that’s not to say other data in the study isn’t concerning. The report also showed that the workday has lengthened by an hour in many countries, and the average meeting is a full 10 minutes longer.

“The overworking is real,” says Lister, “and it stems from your screen being right there in front of you, all the time. You don’t have the social cues you had in the office, around getting up and going to lunch, or quitting at the end of the day, so you just keep working.”

Feeding into these longer working hours is the fact that we’re pinging colleagues more with chats, sending more emails and scheduling more meetings to replace the casual interactions we used to have passing in the office corridor, or leaning over to ask a desk-mate a question.

And although before the pandemic we might have put aside our digital platforms for an in-person team meeting, a lunch break or a commute, now these online tools are constant companions. Switching between them, moving from email to internet browsers to Slack, for example, taxes our cognitive processes. Toss in constant video chats, and things get even worse.

“In real life, our brains aren’t wired to look at a flat image of a person on a grid,” says Dr Michael Bohan, the director of Microsoft’s Human Factors Engineering Lab. “Brains are wired in the real world, and designed to use body cues, and all this other subtle stuff in order to process and communicate.”

During a virtual meeting, with multiple participants in little boxes, our brains try to process each participant individually, listen, comprehend and take in visual cues. Even before you start trying to focus on the meeting’s agenda, your brain is working overtime. “You might not be aware of it consciously,” says Bohan, “but just working on a screen puts this huge cognitive overhead on your brain.”

The more meetings there are, the worse it gets. In one study, Bohan and his research team observed people’s brain activity during a series of simulated virtual meetings. They tracked how often the participants produced alpha waves – which appear in brains at rest – and beta waves, which appear when the brain is hard at work. What they saw was a nearly endless string of beta waves over the course of a day of meetings. “At the end of the day, that build-up of beta waves was strongly associated with people feeling exhausted and anxious,” says Bohan.

Meetings aren’t the only problem, however. Your brain produces beta waves anytime you’re processing a lot of information at once – in other words, almost anytime you’re staring at a screen. And after a period of sustained beta-wave production, your brain’s processing starts to slow down. The more you try to push through to get all the work done, the harder that becomes to do.

The good news is that something as simple as a 10-minute break if used correctly, can help mitigate the effects of digital intensity. Breaking up long stretches of meetings or on-screen work can help with beta wave build-up.

“If you give yourself a break, and do something like meditation, reading, sketching, doodling – anything that turns your brain to something more relaxing,” says Bohan, it will begin to produce alpha waves. After the break, “you’ll be more engaged and focused”, he adds. “Taking breaks lets you reset, and maintain better brain health across the day.”

A daunting workload – exacerbated by the fact that working virtually is often more difficult and time-consuming – may make a meditation break seem like an impossible luxury. But there are substantial benefits; a period of alpha waves restores cognitive function and can make you more productive.

Spataro says Microsoft is trying to address video chat’s cognitive overload issue by developing new software features. He points to “together mode”, a virtual filter in Teams that puts meeting participants on a shared background (Zoom has introduced a similar option, called Immersive Scenes). By eliminating participants’ individual boxes and backgrounds, the filters strive to reduce some of the subconscious processing taking up cognitive space.

But reducing our digital intensity problem is not just about tweaking video-chat platforms. Part of the problem, says Spataro, is that a year into the pandemic, we’re still trying to replicate our old work patterns in a radically new at-home environment.

“It’s not working. We’ve entered a new era,” he says. “We need new habits, new practices, new cultural understandings. We need to learn new skills and patterns, and create new cultural norms.” Instead of seeing workers as “robots in a factory”, we should be building a new culture that sees workers as “elite athetes”. “Everything we know about athletic training applies; we need intense sessions of work, then recovery. And the recovery is just as important.”

‘Let’s do it better’

Lister believes this kind of change begins with re-assessing how we communicate at work. “A video meeting is not the answer every time we need to talk to someone. Long meetings with one person talking, and everyone else listening? That should be a memo.”

She believes that most meetings – in person or in the virtual world – are “wasteful”. Now, when they’re happening on screen, “many people sit and multi-task, which is a whole other cognitive-load issue. They’re doing that because they shouldn’t be in the meeting in the first place. Meetings have been broken for a long time… why should we replicate that in the virtual world?”

To reduce overworking, Lister says companies have to communicate policies and expectations to workers clearly. “Some people work best at 0300, but if I get a note from my manager at 0300 and don’t see it until 0800, I’m going to feel like I’m behind the curve,” she says. “Companies have to be intentional about saying, ‘You are not expected to answer that email at 0300’.”

But micromanagement should be avoided, adds Lister. “Management by presence”, as she calls it, is what leads to people spending far too much time on video calls and in chats – suffering from the digital intensity. Ending presenteeism means creating a culture where workers know they can – and should – be logging off.

Finding new ways to connect with our colleagues, and reducing the number of daily meetings, emails and virtual check-ins will do more than lessen the digital load. It will also pave the way for a reinvented post-pandemic workplace, which most expect to be a hybrid of old and new.

“We need to look at every process,” says Lister, “and ask: why are we doing this? Is there a way to do this more effectively? Let’s not replicate what we’ve always done virtually. Let’s figure out how to do it better.”