China Daily: Another route from China to Europe in the South Caucasus 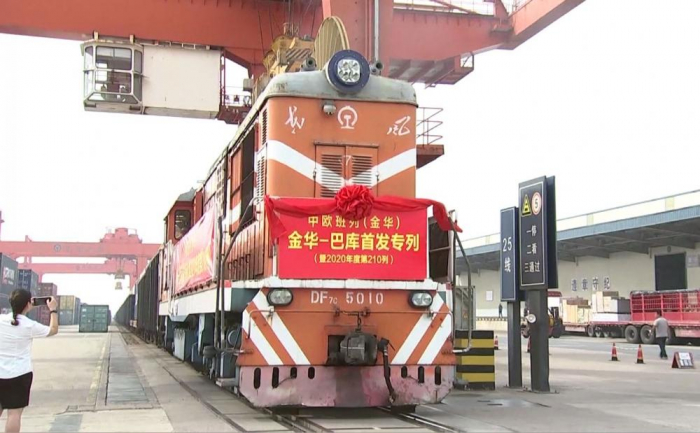 Since the establishment of diplomatic relations, bilateral cooperation between Azerbaijan and China has been dynamically developing. Both countries are interested in continuing and deepening bilateral ties. Because the interests of Azerbaijan and China in many respects coincide, especially with regard to the Belt and Road Initiative.

Azerbaijan, which is at the center of three major regional energy and transport projects - TRACECA, the Silk Road Economic Belt and North-South, made an important contribution to their implementation and continues to do so despite the new realities in the South Caucasus as a result of the pandemic.

Azerbaijan has successfully integrated its transit capabilities into the Chinese transport strategy. The Baku Port and the Baku-Tbilisi-Kars railway together form the shortest route in the east-west direction, which allows goods coming from China to reach Europe within 12 days.

Baku continues to contribute to the development of the Belt and Road Initiative. The Azerbaijani side is currently carrying out relevant work in the direction of creating a new transport corridor, which is designed to connect Azerbaijan and the Nakhchivan Autonomous Republic through the territory of Armenia and will become part of the East-West transport corridor.

In accordance with the ceasefire concluded with the mediation of Russia, which ended the hostilities between Armenia and Azerbaijan in November 2020, Azerbaijan gains the right to use the road passing through the territory of Armenia to access the Nakhchivan Autonomous Republic. All economic and transport links in the region will be unblocked. Armenia, according to the tripartite agreement, guarantees the safety of transport links between the western regions of Azerbaijan and the Nakhichevan Autonomous Republic in order to organize the unhindered movement of citizens, vehicles and goods in both directions.

The launch of a new transport corridor can turn the Trans-Caspian international transport route into a priority vector for China's transportation of goods to Europe in the context of the Belt and Road Initiative and provide Beijing with a second South Caucasian route to Europe: through southern Armenia, Nakhchivan, Turkey. And since control over transport communications will be carried out by Russian border guards, this will serve as additional protection for Chinese goods bound for Europe.

The opening of this corridor can benefit not only Azerbaijan, Armenia, Turkey, Russia, Iran, but also the countries of the Asia-Pacific - China in the first place.

President Ilham Aliyev of Azerbaijan invited the countries of the Asia-Pacific to study the potential of a regional project for creating a Zangezur transport corridor, which is designed to connect Azerbaijan and Nakhivan through Armenia. He said this on Monday at the 77th session of the Economic and Social Commission for Asia and the Pacific entitled "Securing more active post-crisis development through regional cooperation in the Asia-Pacific region", held in the format of a video conference.

“Azerbaijan wants to ensure lasting peace and security in the region. Azerbaijan has made an important contribution to the implementation of regional projects, such as transport corridors East-West, North-South, North-West. We are currently working on the Zangezur transport corridor, which will become part of the East-West corridor connecting Asia and Europe through the territory of Azerbaijan. I invite partner countries in the Asia-Pacific region to study the potential of this regional project", the Azerbaijani leader said.

Azerbaijan, located on the historical Silk Road, being a space where various civilizations merged, wants to play the role of a transport and logistics hub between Europe and Asia. Therefore, Baku has high hopes on Beijing in the matter of not only the implementation of this project, but also other projects that can really benefit the Belt and Road Initiative.

Azerbaijan is interested in gaining a foothold as a key node of the BRI, since it is very important for Baku from the point of view of increasing the volume of international cargo transportation. For the reason that within the framework of the East-West and North-South transport corridor, there is an increase in the volume of international cargo transportation through Azerbaijan. Approximately 90 percent of the goods imported into the country are transported in transit to other countries. In addition, the Chinese initiative is attractive given the development of the non-oil sector in Azerbaijan and an increase in revenues from various sources.

In addition, Baku sees itself as a hub for a Trans-Eurasian telecommunications corridor that will connect Internet exchange points, complementing another China's Digital Silk Road project with a route from Mumbai to Frankfurt via Azerbaijan. To this end, AzerTelecom and China Telecom signed a memorandum of cooperation in 2019.

Azerbaijan is an ideal partner for the construction of the Silk Road Economic Belt for several reasons. First, Azerbaijan, which has access to the Caspian Sea, is a connecting zone of economic interests of East Asia, Europe and Russia. In other words, Azerbaijan is becoming a new point connecting the European economic ring with the East Asian one.

Secondly, Azerbaijan, located on the historic Silk Road, was able to develop a multimodal corridor laid along the shortest land route between China and the European Union. Third, Azerbaijan has similarities with China in terms of economic development as a priority, implementation of an independent and peaceful foreign policy, striving for political stability and unity of the country, which contributes to mutually beneficial cooperation.

Thus, the unblocking of all communications in the South Caucasus, envisaged by the November trilateral statement on Karabakh, will strengthen not only Azerbaijan's position as a transport and logistics link in the South Caucasus, at the junction of the continents of Europe and Asia, but also provide China with an alternative route for transporting its goods to Europe.

Seymur Mammadov is the director of the international expert club EurAsiaAz and editor-in-chief of Azerbaijan's news agency Vzglyad.az.