What are the components of burnout? - iWONDER 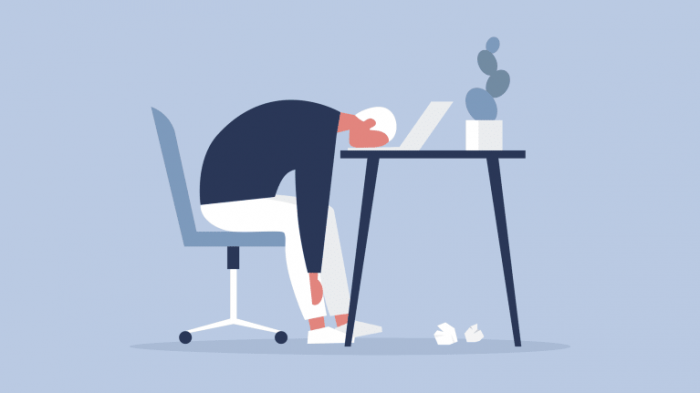 The pandemic has pushed many to the brink. But although we're exhausted and overwhelmed, some experts say we're not actually as burned out as we may think.

On lots of occasions, I’ve told myself – and my friends and colleagues – that I’m experiencing burnout. Making a living as a freelancer can often mean working long hours, and trying to keep a lot of very different plates spinning at once. A few times a year, I hit what feels like a creative wall: I’m fresh out of good ideas, and I just really need to nap. For a long time, I’ve been calling that burnout. But I’ve been wrong.

We tend to think of burnout as an intangible – one of those things we can’t define, and we just know when we feel it. Right now, more of us may be feeling it than ever. In this stage of the pandemic, after more than a year spent trying to navigate its challenges, the general feeling is that we’ve all hit the wall.

But there is a scientific definition of burnout, and standards by which to measure it. And based on that criteria, a lot of folks who think they’re burnt out – myself included – really aren’t. That doesn’t mean we aren’t on the way there, though, and understanding how to really measure burnout can help individuals and organisations change course before it’s too late.

What burnout is – and isn’t

In 1981, Christina Maslach, a professor of psychology at the University of California, Berkeley, developed the Maslach Burnout Inventory (MBI), to define and measure the condition.

“The challenge is people use the term to mean different things,” says Maslach. “It’s a catchy term, so people apply it to all kinds of stuff. So, are we all speaking the same language?”

The MBI attempts to clarify the subject by evaluating burnout based on three criteria: exhaustion or total lack of energy, feelings of cynicism or negativity toward a job and reduced efficacy or success at work. Respondents get scores in all three areas along a continuum, from more positive to more negative. A burnout profile requires a negative score in all three.

People use burnout as a synonym for tired, and they’re missing the point that there’s a world of difference between those two states – Michael Leiter
“There’s a tendency to think if you score negatively on one measure, you’re burnt out,” says Maslach, but that’s an incorrect usage of the MBI. The biggest misconception about burnout, adds Michael Leiter, a Nova Scotia-based organisational psychologist and the co-author, with Maslach, of The Truth About Burnout, is that it’s the same as exhaustion.

“People use burnout as a synonym for tired, and they’re missing the point that there’s a world of difference between those two states,” says Leiter. He gives the example of obstetricians, who often work chaotic schedules. “They’re delivering babies at all hours of the night, and they’re totally exhausted, but they’re bringing new life into the world, and making people’s lives better, and they care about that work. That’s overextended and exhausted, but it’s not burnout.”

There are plenty of others who meet one of the MBI criteria. “The second largest group, after people who are just exhausted, is people who aren’t fully engaged,” says Leiter. “They’re going to work and it’s not exciting, it just pays the bills. There’s another group that are just cynical. They don’t care about the clientele, or the work.” Still others may have low efficacy, with careers that are stalled for one reason or another.

But fewer people can report that all three conditions apply. I can’t. While I’ve definitely experienced exhaustion, and even some disengagement, I still love what I do and haven’t become cynical about my work. It takes all three – exhaustion, cynicism and lack of efficacy – to get what’s scientifically defined as burnout. The majority of us aren’t there.

“It’s not an epidemic; it’s over-diagnosed,” says Leiter. But that doesn’t mean there isn’t a problem, or that conversations around burnout aren’t increasing for a reason. “Qualities of burnout are on the rise,” concedes Leiter. “Certainly, more people are heading in that direction.”

Burnout is a spectrum, and most of us are on it. Early this year, when job search site Indeed surveyed 1,500 US workers across ages and industries, more than half reported that they’re experiencing burnout. And more than two-thirds said the pandemic had made burnout worse.

That survey did not use the MBI, and chances are most of those respondents were using the colloquial definition of burnout, not the scientific one. But while burnout – the kind defined by three negative MBI scores – is a profile that Maslach says typically applies to 10% to 15% of people, that doesn’t mean everyone else is all the way on the other end of the spectrum.

In fact, Maslach and Leiter’s newer research identifies three profiles in between: overextended, ineffective and disengaged. Evidence suggests more than half of employees fall into one of these profiles, with a strong negative score in exhaustion, efficacy or cynicism. They’re not yet burnt out – but they’re on the way.

For people in many professions, says Leiter, things have only got worse as a result of the pandemic, with efficacy issues especially becoming overwhelming.

“Schoolteachers have struggled to continue teaching, and haven’t felt accomplished,” he says. “They just know they’re not being the teacher they were before, and that’s discouraging. It’s the same for physicians. It’s improved, but early in the game there were no protocols for dealing with Covid, and everything they were doing was wrong.”

Those issues have shifted the data on burnout. A study conducted between March and June of 2020 administered a series of tests, including a burnout inventory similar to the MBI, to more than 3,500 healthcare workers in the UK, Poland and Singapore. Just under 67% measured as burnt out.

While historically the true burnout profile for employees in all professions hovers just above 10%, Maslach says “that’s clearly gone up” in light of the pandemic. Now, she believes, it may be closer to 20%.

And that’s a huge problem, because true burnout can’t be fixed with a vacation or a wellness retreat.

“When people really get to the extreme, the vast majority can’t go back to the same employer or the same kind of work,” says Leiter. “They have to change careers. Burnout runs so deep – just even the feel of going into that building, or that sort of building can be a trigger. It very often prompts career change.”

Avoiding true burnout on a wide scale is vital, especially because it could mean a drain of qualified people from skilled professions. That’s where the MBI, and tests like it, become invaluable tools.

Learning that I was not, in fact, experiencing real burnout was helpful. I was able to evaluate what I was actually feeling (overextension), and start thinking about what was causing that and what changes I could make. That is the point of a burnout inventory; it’s not really about diagnosing or ruling out burnout. In fact, says Maslach, “it’s not a diagnostic tool at all. People have misused it that way, but it’s a research measure.”

Though it’s administered to individuals, what the MBI is really designed to measure is their environment. “If there are negative scores, it doesn’t mean the problem is the individual. It’s what they’re responding to,” says Maslach. “You’re not trying to figure out who it’s happening to, you’re trying to figure out whyit’s happening. You don’t use it by itself, you use it with other data to say why is the pattern of scores the way it is? Those scores should be used as warning signals.”

An organisation seeing scores on the negative end of the spectrum should be acting quickly, says Maslach, and that doesn’t mean offering yoga classes or mindfulness seminars.

“Work is getting tougher, longer and harder to do. People are working more hours because they’re scared they won’t get a promotion, or will lose their job. Doing more with less is at the heart of corporate culture, and that’s not how people do the best work,” she says. “There’s this gigantic self-care industry out there all focused on how to cope with that stress; but to prevent, or reduce, or eliminate burnout, it’s not about fixing the people. It’s about fixing the job.”

It’s not actually about measuring how many workers are or are almost burnt out, says Maslach. It’s about identifying workplaces with unmanageable workloads, and using that information to give employees more control, better tools and the discretion to figure out how to do their jobs better – without burning out.

“There’s that old saying, ‘if you can’t stand the heat, get out of the kitchen,’” says Maslach. “The thrust of our argument is, why don’t you change the heat? How about redesigning the kitchen?”