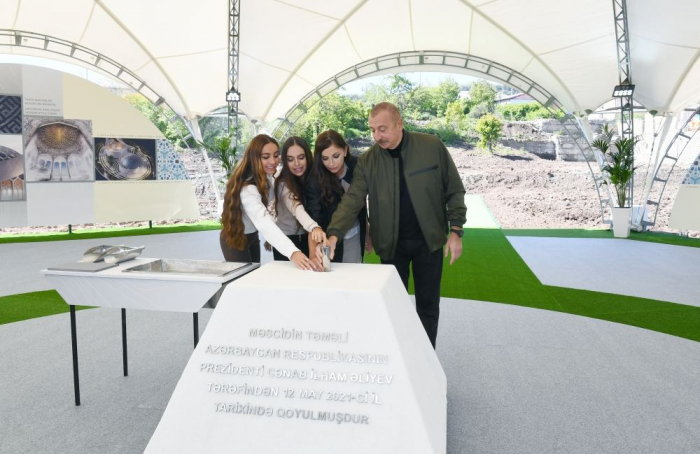 The foundation stone of a new mosque was laid in Azerbaijan’s Shusha city on May 12, AzVision.az reports citing the Azerbaijani presidential press service.

Laying the foundation for the mosque, President Ilham Aliyev said:

- We laid the foundation for a new mosque in Shusha today. A new mosque will be built in Shusha. I made the decision to build a mosque a long time ago. After the liberation of Shusha from the occupiers, I began to think about the architecture of this mosque. We need to take into account the fact that there used to be 17 mosques in Shusha and the hated enemy destroyed all of them. Three mosques were in a run-down state – the Yukhari and Ashaghi Govharagha and the Saatli mosques. The instruction has been issued to repair them.

The Yukhari Govharagha mosque has already been repaired. The architecture of Shusha has its own characteristics and all of the mosques built in Shusha at one time were built in the same style. This is why I was thinking about the architecture of the new mosque. I thought about it for almost a few months. Finally, an idea came to my mind that this mosque and its architecture should be symbolic. Therefore, I suggested that the shape of the mosque reflect figure “8” because we liberated Shusha from the occupiers on 8 November, and 8 November is officially Victory Day in Azerbaijan. The two minarets of the mosque should reflect figure “11” because it was in the eleventh month that Shusha and Karabakh were completely liberated from occupation. Based on these ideas, architects began to work, and the presentation demonstrated here reflects the future appearance of the mosque. This is an initial version. Some work will still be done on it and some changes may be made.

Of course, proposals for the interior design of the mosque are not yet ready. However, conceptually, the architecture of the mosque will reflect 8 November. It will be possible to see figure “8” both from above and from the ground. The location of the mosque was not chosen by chance either. This is the upper part of the city of Shusha, and the mosque to be built here will tower over the city. And this should be the case because Shusha is our ancient city, the city of Azerbaijan built by Azerbaijanis. Azerbaijanis have always lived here. The Azerbaijani population was simply deported from here by force during the occupation.

We have returned to Shusha and we have returned forever! A building towering over the city should be the building of a mosque, and this building should be located in the upper part of the city. The day on which the foundation of the mosque is being laid was not chosen by chance either. Tomorrow, the entire Muslim world will celebrate the sacred holiday of Ramadan. I would like to take this opportunity to congratulate all the people of Azerbaijan on this blessed holiday of Ramadan. The groundbreaking ceremony of a new mosque in the ancient city of Shusha on the eve of the holiday has a great historical and symbolic meaning. From now on, the architects will deal with the entire mosque project and construction work will begin.