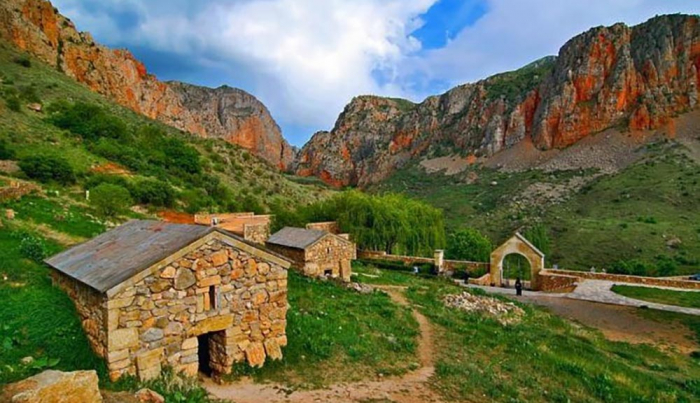 On May 18, Azerbaijan does not mark the anniversary of the occupation of the Lachin region by Armenia for the first time in 29 years following the liberation of occupied territories.

Today in the Lachin district, judging by the indirect but very informative "signals", the second act of the Armenian defeat is revealing- the process of delimitation and demarcation of borders. Where the next "strategic idea" of Yerevan collapsed - an attempt to expand the border conflict out of delimitation and drag Russia and the CSTO into it.

In fact, there is no shooting at Lake Garagel. But the figures in the "diplomatic arena" grew at a whirlwind pace. They also expressed their position on Smolenskaya Square in Moscow. At first, Russian Foreign Minister Sergei Lavrov called the absence of a border “which would be delimited and demarcated” as the root cause of the incident. Then he added:“ We suggested to the parties that they start such work. We are ready to assist them in this process by providing both cartographic material and consulting services. "

A few hours later, a statement by Russian Deputy Foreign Minister Andrei Rudenko appeared: "Russia will deliver assistance to Armenia and Azerbaijan in settling tensions on the border if they request it. As for the CSTO, Rudenko did not announce this discussion, nor dismiss it: “The foreign ministers are meeting in Dushanbe to discuss all the issues on the agenda. I do not deny that this issue will be discussed there. I think the main discussion will take place in Dushanbe on the sidelines of the ministerial meeting", - TASS reported.

Those were quite "neutral" and logical statements, as well as quite expected. The situation in Zangezur, more precisely, the agitation provoked by Armenia around the process of border delimitation, continues to remain in the focus of attention not only of Baku and Yerevan but also of the world's political elite. Both Paris and Washington are holding talks with Baku and Yerevan, and if France, represented by Foreign Minister Le Drian, continues to demand Azerbaijan to withdraw its troops from the territory of Armenia, where its soldiers did not enter. Then the US President's National Security Adviser Jake Sullivan, who called President of Azerbaijan Ilham Aliyev, urged a quite logical call for Baku and Yerevan to start negotiations on the delimitation of the internationally recognized border and to resolve all problems peacefully. And, this call was supported by Azerbaijan.

We can say that Russia is entirely one of the three mediators who is really present in the region in terms of "military-peacekeeping". Also, it has maps which is exactly the same map of the USSR General Staff from 1975, where they are marked with maximum accuracy the borders of the union republics. Finally, it is the Russian border guards who guard the borders of Armenia. In a nutshell, Russia has all the cards.

However, Lavrov's and Rudenko's statements mean multiple defeat for Armenia.

First of all, they talk in Moscow about the delimitation of borders based on maps, and not on the basis of Yerevan's "Wishlist". Moreover, inevitably in Armenia, they understand that even if the United States and France get involved in the process, the border will still be delimited according to the 1975 maps. This means that Armenia will have to return the entire territory taken from Azerbaijan, including strategic heights, roads and river sources. The situation is happening in the Shurnukh village has every chance of repeating itself on other sections of the border.

And finally, the most important thing. Lavrov's and Rudenko's statements came after Armenia showed its “tearful diplomacy,” begged Russia to provide it with military support and appealed to the CSTO on this matter. One of the Armenian telegram channels, could not control itself and spread such a question: "Can this be considered a response to Armenia's official appeal to Russia for military assistance?" In Yerevan, they clearly expected more and were already making plans how Mother Russia would fall with all her might on such and such Azerbaijan and allow Armenia to fulfil the dream of revenge - and suddenly such a "bummer": go and negotiate with Azerbaijan on the basis of maps and recognized borders".

And what is left for Armenia to do now? Theoretically, here, of course, they can take offence at Moscow. In the local telegrams, they say: "The CSTO continues to prove its uselessness", but in reality, Armenia has nowhere to go. Macron and his team can make gestures like social media posts in Armenian, but to cover the costs of ensuring Armenia's security? Later, France, in fact, decreased its activity in Africa, after the Turkish "blow", it withdrew from Libya? Real hopes for Paris are not enough even to create a problem for political trade with Moscow.

And the current crisis has once again demonstrated that Yerevan simply does not have its own capable power structures, and Armenia has to rely only on Russia's favour in warranting its own security.

In short, the remnants of Armenian hopes for quick revenge by the CSTO forces seem to be blown off course.

Read the original article on minval.az.