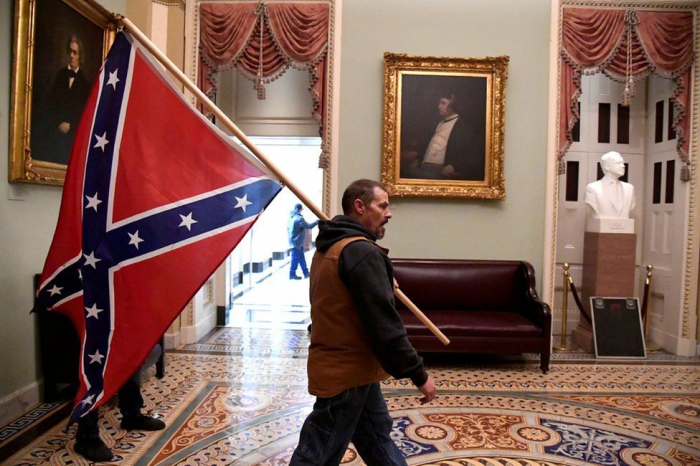 The Democratic-controlled US House of Representatives has voted, with Republican support, for a commission to investigate the Capitol riot.

Thirty-five Republicans defied their party leaders and former President Donald Trump in siding with Democrats by 252-175 to establish the inquiry.

Mr Trump had urged Republicans to vote against the "Democrat trap".

The inquiry would be modelled on the commission that investigated the 9/11 attacks on New York and Washington.

It would establish a 10-member body, evenly split between the two main parties, that would make recommendations by the end of the year on how to prevent any repeat of the Capitol invasion.

Wednesday's vote was seen as a loyalty test to the former president for members of his party.

All 10 of the House Republicans who voted to impeach Trump in the days after the Capitol riot for incitement of insurrection were among the 35 who voted for the commission.

Capitol police officers point their guns at a door that was vandalized in the House Chamber during a joint session of Congress on 6 January 2021 in Washington, DC.

New York congressman John Katko, who negotiated the legislation with Democrats, said: "This is about facts - it's not partisan politics."

Mr Katko - the top Republican on the House Homeland Security Committee - said "the American people and the Capitol Police deserve answers, and action as soon as possible to ensure that nothing like this ever happens again".

But Marjorie Taylor Greene, a Georgia Republican, said the commission was a Democratic ruse "to smear Trump supporters".

Shortly before the vote, Tim Ryan, an Ohio Democrat, said on the House floor: "We have people scaling the Capitol, hitting the Capitol Police with lead pipes across the head, and we can't get bipartisanship? What else has to happen in this country?"

A supporter of President Donald Trump carries a Confederate flag on the second floor of the US Capitol near the entrance to the Senate after breaching security defences, in Washington DC. 6 January 2021.

But the legislation faces dim prospects in the Senate, where the rules mean Democrats would need 10 Republicans to join them in passing it.

John Thune, the deputy Republican leader in the upper chamber, said he was concerned the inquiry would be "weaponised politically" in the 2022 election cycle.

Mr Trump has been dividing post-presidential life between his golf clubs in Florida and New Jersey and hinting about another run for the White House in 2024.

He continues to spread unfounded claims that last year's election was stolen from him - the conspiracy theory that drove many of his supporters to Capitol Hill on 6 January.

One of them, an unarmed woman, was shot and killed by police as she tried to break into the House chamber.

Two other protesters died of heart failure in the melee and one other from an amphetamine overdose.

A Capitol Police officer who tackled the protesters died of a stroke the following day. Two other officers took their own lives in the days after.

The Capitol Police union said one officer lost an eye during the attack and others sustained brain injuries.