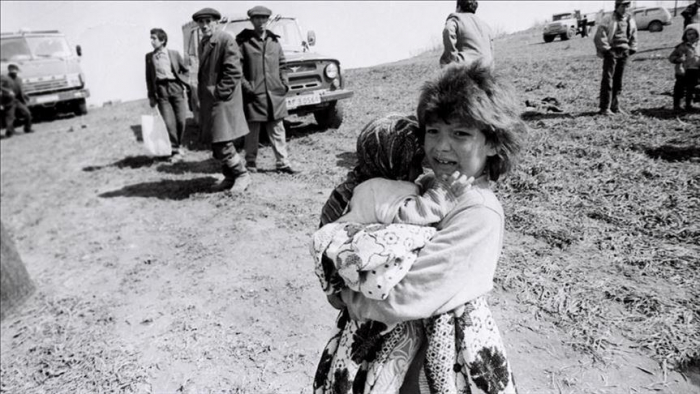 TheJ.ca, a Canadian portal, has published an article entitled “Bashlibel Massacre: A Tragic Moment of the First Karabakh War”.

The article by Vasif Huseynov, a senior advisor at the Center of Analysis of International Relations (AIR Center), reads:

"Picture a remote village nestled in a valley surrounded by rugged yet scenic mountains. A prosperous and peaceful place with a population of fewer than 2,000 living in an ideally natural place. As in the neighboring villages, most residents subsist by farming and beekeeping. They export a bountiful surplus to the rest of the country. The villagers are fond of reading verses aloud, often poems they have written themselves. They are proud of the achievements of their school, one of the largest schools in the region, and the aspirations of their young people to go to university, in the national capital or further afield.

Such was Bashlibel, at the southeastern edge of the Kalbajar district of Azerbaijan. But it is now necessary to talk about this beautiful village in the past tense. That is because Bashlibel, together with hundreds of other villages in the Karabakh region, fell victim to the full-scale war launched by Armenia in the early 1990s. Within a short time, the village had been all but razed to the ground.

It is particularly hard, even heartbreaking, for me to tell the history of the occupation to which Bashlibel was subjected, as it is the place where, in 1989, my mother gave birth to me and where I lived in happiness until, in 1993, the armed forces of Armenia swept in.

My parents were caught off-guard by Armenians in the first days of April 1993, as were all the other residents of the villages, because the villagers had not had a stable means of communicating with the outside world since the electricity supply was cut by Armenians in January 1992. Nor did they believe that their Armenian neighbors would take up arms, launch a war, and forcefully expel them from their homes. This was part of the reason that local Azerbaijanis continued to live in Kalbajar as if nothing had happened, even after the blockade of the Kalbajar region in the wake of Armenia’s 1992 occupation of the former Nagorno-Karabakh Autonomous Oblast and the cities of Shusha and Lachin.

On April 2, 1993, Kalbajar’s residents, then approximately 60,000 people, woke up to the horror of being surrounded by the Armenian armed forces. The Armenians gave local Azerbaijanis only ten hours to leave the area. The alternative was being killed or, worse, taken hostage. They did not care how the Azerbaijanis would leave Kalbajar, despite the only passage to the unoccupied northern part of Azerbaijan being through the freezing mountains of Murovdag, where about twenty inches of fresh snow had fallen that day. For most local people, the only available means of transportation were horses, which were little help for a quick escape through snowy, mountainous regions. The available cars and a strictly limited number of helicopter flights could rescue only a handful of people.

The ongoing political crisis in the Azerbaijani government and military leadership prevented the country from deploying an effective military defense against the attacks of the fully armed military forces of Armenia. Counteroffensive operations by the Azerbaijani army succeeded in protecting most of the population and helping rescue them from the Armenian attacks, but they failed to push the Armenians back. Hundreds of civilians were brutally killed by the Armenian armed forces; hundreds more were taken hostage, and their fate remains unknown.

As a 4-year-old child, I had no clue what was happening, why people were leaving their homes in panic, or where we were heading on foot in the cold morning. I hardly remember the shock my family experienced then, but, retrospectively, I can see how traumatic it must have been for my mother, then seven months pregnant with my sister, and my disabled grandmother, who could not walk without assistance. The residents of Bashlibel had no access to the helicopters and only a few automobiles to save their families from the horror that Armenian troops brought to their village.

Nevertheless, we had to reach the other side of Murovdag on foot. Fortunately, there were two horses at our disposal; my mother and one-year-old brother used one, my grandmother the other. Halfway, some of us – my grandparents, mom, me and my brother – were taken by a Soviet-made car whose Bashlibeli driver Tahir Samadov was driving back to Bashlibel to help people. Thanks to him, we safely arrived in Khanlar district in unoccupied Azerbaijan, where many other Kalbajari people, already termed internally displaced people (IDP), came together to wait to be provided with “temporary” shelters. Tahir left again for Bashlibel to help others but never came back. My dad, together with my uncles arrived in Khanlar a few days later; they had walked all the way from Bashlibel, like many others.

As in some other parts of Kalbajar, not everyone in Bashlibel was willing to flee their village and leave everything behind for an uncertain journey. More than 80 villagers thought that the Armenian troops would soon leave the area and they could return to their normal lives. Unfortunately, they miscalculated the situation—and the savagery of the Armenian armed forces.

As Armenians approached the village, nine local people were brutally killed and five were taken hostage, while others quickly fled and found shelter in caves in the mountains some one or two kilometers from the village. They had to live in these refuges for more than two weeks before feeling safe to leave the area towards Murovdag.

Unfortunately, however, not all survived. Looking around to make sure that everyone had left the village, Armenian soldiers located the shelters where a group of people were hiding. Now, take a breath and, for a moment, imagine the scene: unarmed people, including children and the elderly, seeing fully armed Armenians approaching to kill them. The parallels with other, better-known atrocities of the mid-20th century are clear. Some of those found by the Armenians were killed immediately, but ten or more people were taken as hostages.

About 30 people, most of the rest who had hidden themselves in the refuges, eventually managed to escape the area, moving by night through the mountains. After a long and horrific journey, most arrived in unoccupied Azerbaijan. One did not; 93-year-old Alasgar Alasgarov never left the shelter in Bashlibel, saying goodbye to the others and telling them he could not leave the village where he had lived his entire life.

All of us, those who left Kalbajar in early April, and those who escaped later, stepped into dramatically different lives from those we had before. Unlike the Armenians who left Kalbajar after the Second Karabakh War, we were not given 15 days to move out, but just 10 hours. Most of us, including my family, did not have a chance to collect even our jackets before leaving the area. For long years, we lived in makeshift shelters in absolute poverty.

The trauma we lived through, back in Bashlibel, remains seared into our minds and has haunted us every single day since. But we were undoubtedly luckier than those others who were taken hostage. We would never learn what happened to hundreds of Azerbaijanis who were taken to Armenia or went missing in that period. The savagery and violence that the survivors witnessed suggest that those Azerbaijanis had likely been subject to the tragedies tantamount to those of an earlier period’s extermination camps.

Now, following the Second Karabakh War, the site of this tragedy is free of occupation, but not of memories. Azerbaijan’s law-enforcement agencies have recently identified the burial places of the victims of the massacre. And photographs taken after the liberation of Kalbajar show details of the crude refuges where survivors sheltered; it is hard to imagine how those people survived there for so long.

For all these reasons we, the survivors of the Armenian occupation, read with some surprise the statements of Western politicians and some international organizations about the fate of members of Armenian sabotage groups that were detained by Azerbaijan long after the Second Karabakh War. They are often visited by the International Red Cross and are even given the chance to phone their relatives.

Those hundreds of Azerbaijanis who were taken hostage in the first Karabakh war were not so lucky. No Western politician expressed concern about them. No one pressured Armenia to release them. No one knows, even after thirty years, what happened to them."