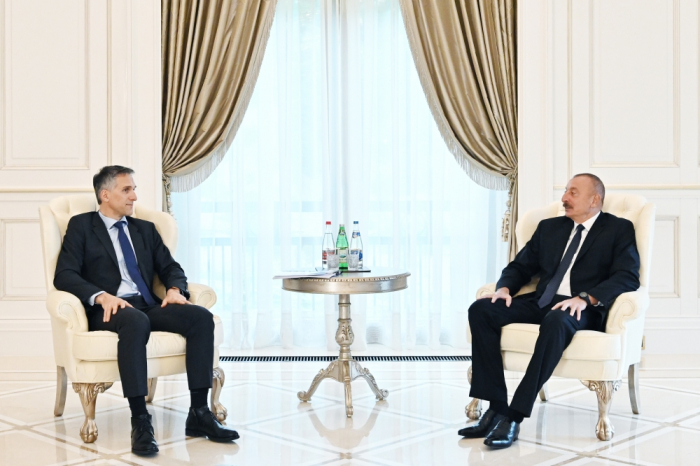 President of the Republic of Azerbaijan Ilham Aliyev has received Chief Executive Officer of Signify (formerly Philips Lighting) Eric Rondolat and other senior officials of the company.

The sides discussed the progress of projects “Signify” is implementing in Azerbaijan.

President Ilham Aliyev said he was pleased with the work the company had been doing to illuminate the streets of Baku, Sumgayit and Shamakhi, adding that this was important in terms of transport and public safety.

Expressing gratitude to the head of state for the favorable business and investment climate created in Azerbaijan, Eric Rondolat briefed President Ilham Aliyev on the work the company had carried out in the country, noting that work had been completed in Baku and Sumgayit and was nearing completion in Shamakhi. He noted that thanks to the new technologies, these projects had saved 50 percent on electricity. In the future, these savings will reach 75-80 percent.

President Ilham Aliyev pointed to the need to continue the application of new technologies and stressed the importance of developing street lighting projects in Ganja, Mingachevir, Shaki, Gabala, Shirvan and Lankaran. Speaking about the infrastructure projects being implemented in the liberated territories, the head of state said that a lot was being done to develop master plans for Shusha and Aghdam, and it was expedient for “Signify” to join this process at the stage of preparation of master plans.

During the meeting, the sides also discussed issues related to the implementation of pilot projects to achieve high productivity in vegetable growing, poultry farming and fish production through the application of new lighting technologies.