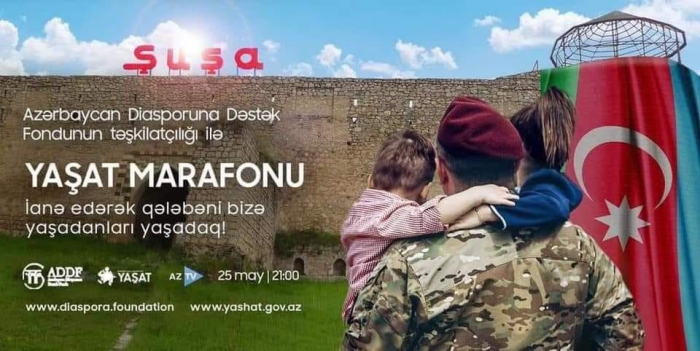 A marathon will be organized in Azerbaijan to support citizens affected by the last year’s war, Azertag reported on May 24.

The marathon has been initiated by the Azerbaijani State Committee for Work with the Diaspora and the YASHAT Foundation that was set up to help families of martyrs and war veterans.

The marathon will be financed and organized by the Azerbaijani Diaspora Support Fund. The marathon aims to call on Azerbaijanis living abroad to donate to the YASHAT Foundation to support the second Karabakh war veterans and the families of martyrs.

In the marathon, Azerbaijanis from all over the world will unite under the slogan "Let's live together", support those who gave Azerbaijan the victory in the 2020 war and commemorate them.

As part of the marathon, live relays will be established with Azerbaijanis abroad and celebrities living in different countries, members of the martyr families and veterans of the Great Patriotic War will take the floor.

Moreover, a report on the work done by the foundation in the short term will be presented.

In early May, the Defence Ministry updated the list of Azerbaijani martyrs killed in the 44-day war. As of May 8, some 2,895 soldiers were martyred in the war and 19 servicemen are considered to be missing.

The hostilities between Azerbaijan and Armenia resumed after that latter started firing at Azerbaijani civilians and military positions starting September 27, 2020. The war ended on November 10 with the signing of a trilateral peace deal by the Azerbaijani, Russian and Armenian leaders.

The peace agreement stipulated the return of Azerbaijan's Armenian-occupied Kalbajar, Aghdam and Lachin regions. Before the signing of the deal, the Azerbaijani army had liberated around 300 villages, settlements, city centres and historic Shusha city. The Azerbaijani army declared a victory against the Armenian troops. The signed agreement obliged Armenia to withdraw its troops from the Azerbaijani lands that it has occupied since the early 1990s.