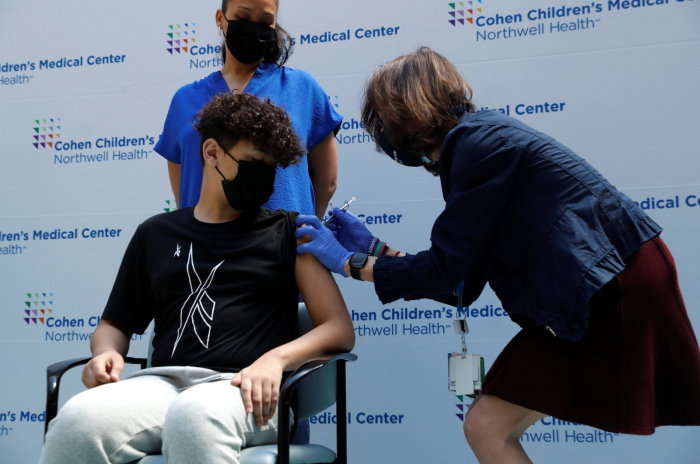 After beginning inoculation for 16-year-olds, European countries are wondering whether children should be vaccinated against the coronavirus or not as many hard-hit regions around the world intensify calls for an equitable distribution of vaccines, AzVision.az reports citing Reuters.

Vaccinating children, who are less prone to severe COVID-19 but can be disease carriers, could help Europe to finally tame the pandemic.

Still, many health officials across Europe said they are continuing to weigh the low risk of serious COVID-19 disease among children against the benefits for broader society that would accompany inoculating them.

"Vaccination to achieve herd immunity is also an aspect," he added. "Should we recommend vaccination of children to gain control?"

In the United States, where more than 60% of adults have gotten at least one shot, 12- to 15-year olds started getting Pfizer-BioNTech shots this month.

Children in Canada are getting shots, too.

The European Medicines Agency is still reviewing the Pfizer-BioNTech for 12-to-15 year-olds, with Moderna planning to seek approval as early as next month.

In France, the reopening strategy likely must include vaccinating children, given its models require 90% of the population to get shots to avoid epidemic resurgence, its Institut Pasteur has said.

By May 20, however, only 18% of France's adult population had received both shots of a coronavirus vaccine.

A source close to the French scientific committee that advises the government told Reuters its members are assessing several scenarios, including shots for 16-to-18 year-olds from June and younger children from September as the new school year starts.

"A clear answer from me is: 'Maybe, and in any case, not now,'" French Health Minister Olivier Veran said last week, when asked about vaccinating younger children.

"We need to get a shot to adults first."

Italy could start by July, but the government is under pressure from a group of doctors and lawyers demanding a moratorium for children, due to what it calls a lack of long-term safety data.

"For children it is scientifically clear that there is no emergency," Eugenio Serravalle, a pediatrician and president of the group, the Association of Health Studies and Information, told Reuters.