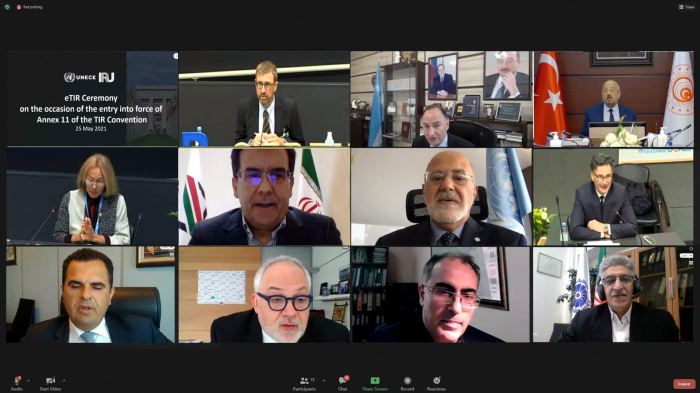 A meeting was held for the Convention on International Freight Transport online.

Azerbaijan was represented at the event by Deputy Chairman of the State Customs Committee Javad Gasimov.

Speaking at the meeting, Gasimov noted that the globalization of economic processes, the emergence of new forms of trade relations, as well as the rapid growth of import and export operations further increase the importance of international freight transport operating according to modern principles and methods.

He further noted that one of the main results of the Second Karabakh war (from late Sept. to early Nov.2020, when Azerbaijan liberated its lands from Armenian occupation) was an agreement on opening all communications in the region, providing a transit corridor that will connect Azerbaijan’s exclave the Nakhchivan Autonomous Republic with the western regions of the country.

"One of the main perspectives for Azerbaijan, located at the intersection of international transport and communication corridors, is the active use of the international freight transport system on new transport routes that will open in the region," the committee’s representative pointed out.

Besides, according to him, the committee is the authorized body for the application of the Convention on International Freight Transport in Azerbaijan, regularly takes measures to effectively ensure the rights and obligations, procedural requirements set by the convention, as well as to use the advantages of simplifying the procedure of international freight traffic by economic operators and cargo shipment companies.

The event was organized by the UN Economic Commission for Europe and the International Road Transport Union in connection with the enactment of the 11th appendix to the Convention on International Goods Transport.

Appendix 11 is a legal document for the digitalization of the transit procedure regulated by the Customs Convention on International Freight Carriage using the directory. This document will allow the member states to increase the efficiency of transportation, intensively develop this area, improve international transport hubs and routes, optimize border control of goods, develop the transport and logistics system, facilitate and ensure the safety of these processes.