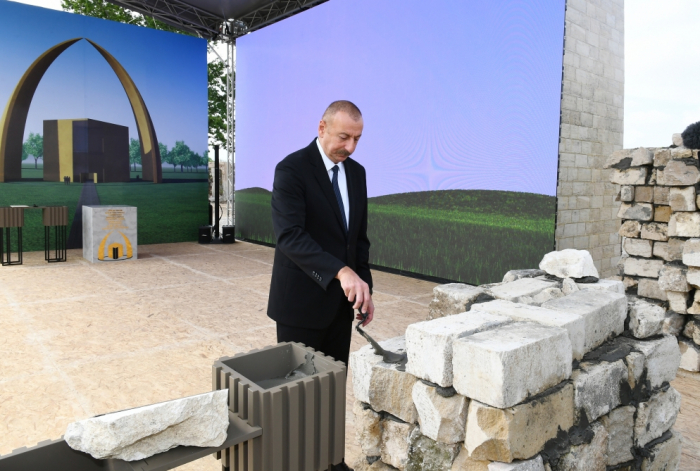 A Victory Museum and an Open Air Museum of Occupation will be built in Aghdam.

President of the Republic of Azerbaijan Ilham Aliyev was informed of the new museums.

Special Representative of the President of the Republic of Azerbaijan to the liberated part of Aghdam district, Emin Huseynov: Mr. President, first of all, I would like to note that the concept of the Victory and Occupation Museum Complex was prepared by an Italian company. If you don’t mind, let’s watch a very short video first.

These are two parts of both complexes – there will be both a museum and a memorial garden in the occupation museum complex.

President Ilham Aliyev: Are they located together?

Emin Huseynov: They are located next to each other and cover an area of 18 hectares. The place where we are standing is the open-air section of it. It is next to the drama theater. The museum will be over there. As you can see in this picture, it covers an area of 8 hectares.

President Ilham Aliyev: Will the ruins be preserved?

Emin Huseynov: Yes, if you have noticed, this is the very lake. We call it the lake of memory. In the upper part, there were the gates of the Drama Theater, a library and a post office. There was a library, there was a hotel, there was a post office and a small shop.

President Ilham Aliyev: Will it stay that way?

Emin Huseynov: Yes, it will stay this way. Their images will be displayed on the surface of the lake both during the day and in the evening by means of a special digital lighting system.

President Ilham Aliyev: What about other destroyed buildings? I have asked for them to be preserved. Are they in this territory too?

Emin Huseynov: Yes, they are in that garden, in the memorial garden in this territory. Everything will remain the way it is. There will also be trails among the pomegranate gardens.

Emin Huseynov: Yes, there will be special mobile applications using which it will be possible to listen to various stories and legends told by people.

President Ilham Aliyev: Then it connects with the Victory Museum?

Emin Huseynov: Yes, it covers a total area of 22.5 hectares. The Victory Museum is located on the other side, near the Flag Square, and the Victory Arena will be next to it. There will be a Museum of Bread here. It will also be restored.

President Ilham Aliyev: What is this building in the lake?

Emin Huseynov: This is that very building, Mr. President.

President Ilham Aliyev: So it will also be in the lake?

Emin Huseynov: Yes. There will also be such a facility here. Its concept is being prepared now. This building is in the middle. I would like to bring to your attention information about the structure of the museum. It has a fairly scattered structure. The goal is to show the difficult path traversed by the Azerbaijani people during the 30-year period of occupation. This is its external appearance. This is the entrance. At the entrance part, large screens will be installed to show

images of the difficult days of occupation. The history of Karabakh and Aghdam will be shown on facts in the first hall, the difficult days of the war will be shown on 360-degree digital screens in the second hall and the destruction of Aghdam in the round hall. All these atrocities will be displayed in video footage and through people’s stories. The fourth hall is very large and high. It will be dedicated to the victims we have had over the course of 30 years. Finally and most importantly, the fifth hall will show the horrific path of our internally displaced persons fleeing from the Khojaly genocide to Aghdam. In order for visitors to experience a semblance of the tragedy, the temperature will be very low there. This is a place that we call a “Hall of Silence”. This yellow line looks like a beam of light, but when you approach it, one can see the panorama reflecting the destruction and burning houses. A large room will create a sense of presence so that people experience the same feelings. All historical facts will be shown in the archive. All this is also a virtual hall. As mentioned earlier, the memorial garden will be an open-air museum. Even the remains of burned and wrecked cars will be displayed among the pomegranate gardens.

This is the mobile application I was talking about. When you hover over a building, stories about it will appear. This is the lake, the gates of that same drama theater and a fence of arches. This arch is a symbol of Victory. The most remarkable thing is that this fence will be fully built of Aghdam stones - both the stones the fragments of which were collected here and those produced in Agdam. Images of all these buildings will be displayed on the surface of the lake both day and night. The insignia of the Victory Museum personifies the gates of the Shusha fortress and the Victory.

Emin Huseynov: Yes, like the Arc de Triomphe. It has been prepared on a white and black background. A similar Victory Museum will also be created in Baku. The same symbols will also be used there. The Victory Museum is both a monument and a museum. The arch moves follows the sun using solar energy. And this is renewable energy. It symbolizes that our Victory is inexhaustible and eternal. The museum located inside consists of metal and glass structures. Metal represents the “Iron Fist” and glass represents justice and the purity of our war and our Victory. By this, we want to convey such concepts as pride, the triumph of peace and native land. There are several showrooms here. Large digital screens will be installed at the entrance. Then there will be rooms with our unmanned aerial vehicles, the most advanced military equipment, the tactics of unique military operations used during the war and, of course, simulation rooms. Most importantly, there will be a hall with the names of our heroic sons engraved on the walls, a quietly flowing waterfall and scarlet flowers. This is to perpetuate the memory of our victims.

President Ilham Aliyev: At the same time, every day of the 44-day war should be reflected here, the history of those days.

Emin Huseynov: The digital tables in the second hall will provide detailed information about each operation. The Victory Arena will be built in the form of an amphitheater. It is designed so that both the Victory Museum and the Flag Square can be seen from here. A automatically opening and closing roof will be installed above it.