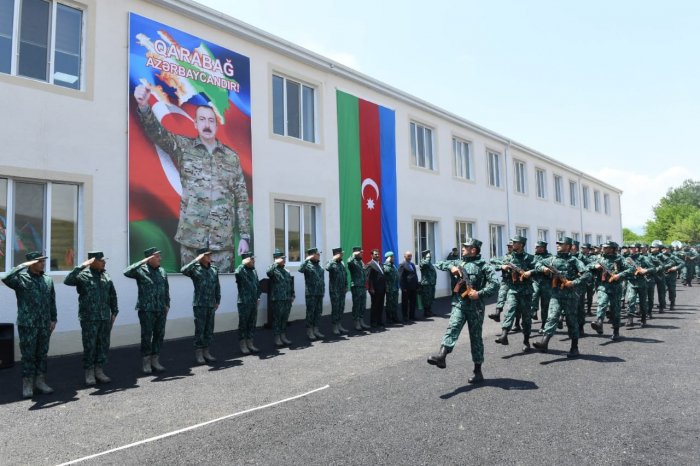 On May 28, a new military unit of Azerbaijan's State Border Service began service and combat activities in the Zangilan region, AzVision.az reports.

The head of the State Border Service, Colonel-General Elchin Guliyev, congratulated the personnel on May 28 - Republic Day- one of the glorious pages in the history of our people and the beginning of the service and combat activities of the new military unit.

Within the framework of the event, servicemen were presented the orders and medals awarded by the President of the Republic of Azerbaijan, Supreme Commander-in-Chief of the Armed Forces Ilham Aliyev for their courage and heroism in the Patriotic War during the liberation of Fuzuli, Jabrail, Zangilan, Gubadli, Khojavand, Sugovushan and Shusha, gratitude was expressed to all the personnel who contributed to the overall victory, to the staff who participated in the construction of the military unit.

After the opening ceremony, the headquarters, service and administrative rooms, housing for officers, dormitory, canteen, laundry, food, goods and weapons warehouses, car park and other places, military equipment and ammunition were inspected.

At the end of the event, a joint lunch was organized with the personnel and memorable photos were taken.