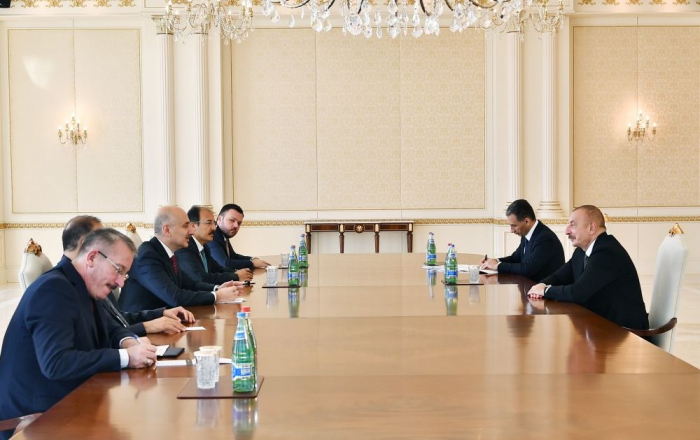 On May 30, President of Azerbaijan Ilham Aliyev received a delegation led by the Turkish Minister of Transport and Infrastructure Adil Karaismailoglu.

"Welcome! I am pleased to see you," President Aliyev said while welcoming the Turkish minister. "I am sure your visit will be successful. There are many issues to be discussed. In fact, the transport sector has always been at the forefront of our agenda."

"After the second Karabakh war, its importance increased further because, along with the projects we implemented together in previous years, new projects are already on the table," the president said. "We have a very strong track record of cooperation. Of course, the joint construction of the Baku-Tbilisi-Kars railway is of particular importance. As you know, this is an important part of the East-West corridor. In recent years, the volume of cargo transported through this corridor has increased."

"After the second Karabakh war, we are working on a new corridor – the Zangazur corridor," the president added. "At the international level, its name has already been established as the Zangazur corridor. This will provide a new connection between Turkey and Azerbaijan."

"We have already started the construction of a railway from Horadiz to the Armenian border in the liberated lands," the president said. "I am confident that in the next two years, maybe two and a half years, this railway will be fully operational."

"Most of the Nakhchivan railway is operational and the remaining part will be built as well," the president said. "All instructions have been issued. A significant part of the Zangazur corridor must be built in Armenia. Thus, a new corridor will be opened and this connection between Turkey and Azerbaijan will become even stronger."

"There are other issues as well, the issues you will discuss with your colleague," the president said. "In general, I can say that this area is of great importance for both Turkey and Azerbaijan. It is an area that connects our peoples. I am confident that all issues on the agenda will be discussed and decisions will be made during the visit. Welcome again."

"Thank you," Minister Adil Karaismailoglu said. "Thank you very much. Thank you again for receiving us. Our esteemed President also sends his greetings."

"We inaugurated the Camlica tower yesterday," the minister added. "We were together there. As you know, we hoisted the Azerbaijani flag on the Camlica tower. It aroused great respect in Turkey and all over the world. It was beautiful."

"Our soul and friend Azerbaijan has always been our brother, our homeland," the minister said. "We have always seen your success as our own. Inshallah, from now on, under the leadership of our President and Your Excellency, we will always make our voice heard all over the world as friends."

"Our brothers visited us to discuss our projects," the minister said. "Inshallah, we will implement all our projects one by one on your instructions. Tomorrow we will go to the construction sites and check the work done by our businessmen, ask them to speed up the work and do it properly. Inshallah, this unity will last forever."

"We are also working on the railway issue, and we have informed our President," the minister said. "In particular, we have completed our projects between Nakhchivan and Kars, between Kars-Aral-Dilucu. Inshallah, we will prepare them in the form of a program and will build this railway together – a new corridor through the territory of Nakhchivan."

"We will hold meetings with our friends," the minister said. "The work of our brothers is ours too. Inshallah, we will do good things hand in hand."

President Aliyev thanked the minister for the greetings from President Recep Tayyip Erdogan and asked him to convey his greetings to the president of Turkey.

Then Karaismailoglu presented a sword to President Aliyev as a souvenir.

"Thank you very much," the president said. "This is a dagger of peace."

"Of course, it is necessary for peace too," the minister said.

"It is necessary," the president added.