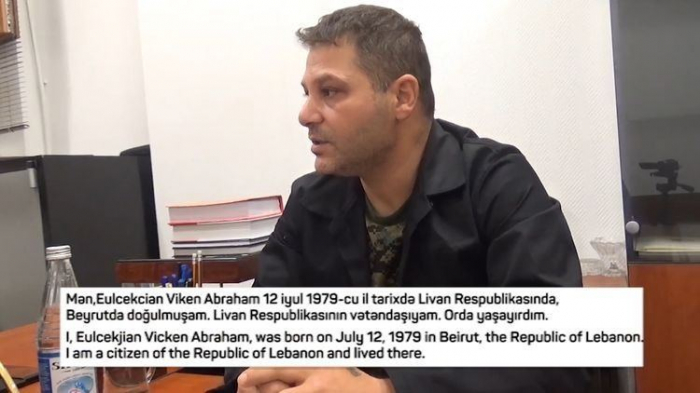 A court hearing on the criminal case of a Lebanese citizen accused of terrorism against Azerbaijan will be held on June 4, AzVision.az reports on June 3.

Lebanese citizen Viken Eulcekjian was brought to the investigation because of the terrorist activity carried out against the citizens of Azerbaijan as part of the Armed Forces of Armenia during the second Armenia-Azerbaijan Nagorno-Karabakh War.

The Azerbaijani Prosecutor's General Office and the State Security Service disseminated information about a Lebanese citizen, who fought in the Nagorno-Karabakh region on the Armenian side.

Realizing their powerlessness compared to the Azerbaijani armed forces, the Armenian military-political leadership, in violation of the basic norms and principles of international law, along with various crimes, committed numerous provocations against the Azerbaijani troops and civilians by using mercenaries in its armed forces.

“A criminal case was initiated by the Main Investigation Department of the Azerbaijani State Security Service upon the relevant articles of the Criminal Code on the fact of participation of a citizen of the Lebanese Republic Viken Eulcekjian and other people as mercenaries in terrorist activity against Azerbaijani citizens as part of an organized group,” the message said.

“The investigation has ended,” the message said. “The investigative bodies revealed that 42-year-old citizen of the Lebanese Republic, resident of Beirut, Viken Eulcekjian initially accepted the offer of a citizen of the Lebanese Republic, Ovak Kikiyan on September 29, 2020, to take part in military operations in the occupied territories of Azerbaijan as a mercenary for $2,500.”

“For this purpose, on the same day, together with other people as part of an organized group, Viken Eulcekjian deliberately crossed the guarded state border of Azerbaijan from the Armenian territory outside the checkpoints and arrived in the territory where other mercenaries were staying,” the message said.

“A measure of restraint was chosen in the form of arrest upon a court decision,” the message said. “The indictment in the criminal case was confirmed and sent to the court for consideration on May 5, 2021.”