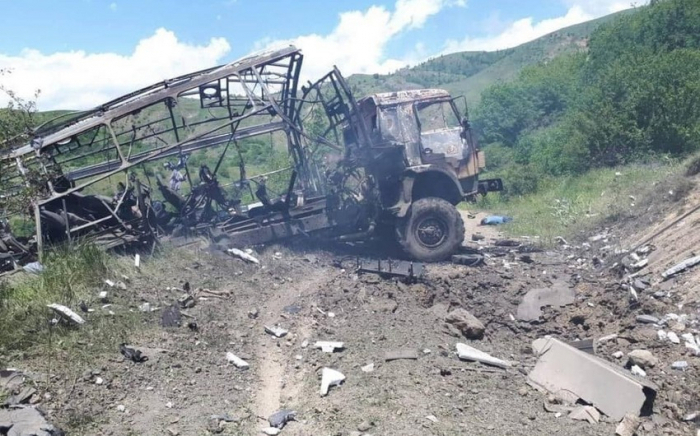 As reported earlier, the Prosecutor General's Office of the Republic of Azerbaijan has launched a criminal case on killings of employees of television channels and news agencies in a mine explosion performing their official duties in Susuzlug village of Kalbajar on June 4.

Some media and social media pages spread unfounded and inaccurate information about the incident.

Therefore, the Prosecutor's General Office reports that the preliminary investigation revealed that the Azerbaijani Armed Forces fully ensure control over the territory where the incident occurred. Therefore, the possibility of penetration of the Armenian sabotage groups and planting mines during the period after the liberation of lands from the occupation is excluded.

A crater (240 x 230 cm) with a depth of 97 centimeters and a KAMAZ car which was completely unusable were found while inspecting the scene with the participation of specialists.

Taking into account the area of the site where the incident occurred and the type of explosion, it is possible to conclude that one anti-tank mine, planted at a depth of 60-97 centimeters, exploded here.

As no fragments were found at the scene of the incident, presumably, this was an anti-tank mine of a plastic, fabric or shellless, high-explosive (armor-piercing) type, intended for planting on roads and in places of possible movement of tracked armored vehicles (such as TM-62P2, TM-62P3, TM- 62T or TM-62B).

During the occupation, the Armenian illegal armed groups used this road as a way for using combat positions.

When the Armenian Armed Forces left Kalbajar district, they mined the territory of the district. The investigation into the criminal case continues and the public will be informed about it additionally.

A car with employees of TV channels and news agencies sent to the Kalbajar district of Azerbaijan hit a mine in the direction of Susuzlug village on June 4 at about 11:00 (GMT+4).

As a result, the cameraman of AzTV TV channel Siraj Abishov, an employee of AZERTAC news agency Maharram Ibrahimov, deputy representative of the Executive Power of Kalbajar district in the administrative-territorial district of Susuzlug village Arif Aliyev were killed.