Victim: Armenian militants pretend to be aggrieved at trial, but they were executioners in Shusha prison 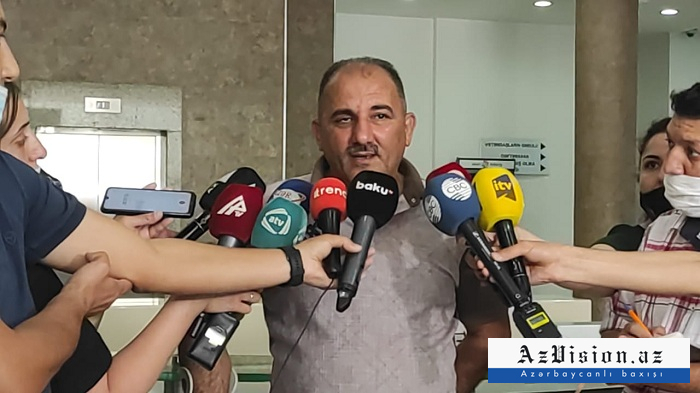 They pretend to be aggrieved at the trial, but in Shusha prison they were executioners, Javid Huseyn, who testified as a victim, said this at the trial on the criminal case against Armenian war criminals Mkrtchyan Ludwig Mkrtichovich and Khosrovyan Alyosha Aramaisovich, accused of torturing Azerbaijani citizens taken captive during the First Karabakh War and committing other crimes, AzVision.az reports.

“Both of them know the Azerbaijani language. I was captured in 1994 during the battles for Gulluja village of Aghdam. That day we were detained in Aghdam, they wanted to kill us there. Later they were informed that they would change us. We were first taken to Khankandi and beaten, then to Shusha prison. There we were beaten on the head with an iron pipe. The ground in front of the Shusha prison froze over, and we were forced to clear the ice, there I was beaten with an iron bar and buried under the snow.

Employees of the International Committee of the Red Cross came and they put me in fortress to hide from ICRC. Mkrtchyan Ludwig and Khosrovyan Alyosha tied my hands and the head of the prison began to beat me. I was asked whether Karabakh is ours or yours? I said that Karabakh is ours. I was so beaten with a truncheon that I lost one eye. Then again the ICRC came to visit us, but  Armenians threw me into the punishment cell so that they would not see me in such a state, the victim said.

Javid Hussein said that Armenians also mentally tortured Azerbaijani prisoners: "When we were in the Shusha prison, they brought children from kindergartens there and showed us to them that they are Turks, our enemies, they will kill you if you go near them. They raised their children like Nazis. We were beaten with various objects. "

The victim noted that when they were in prison, the Armenians brought girls there: “They beat us in front of the girls and were proud of it.