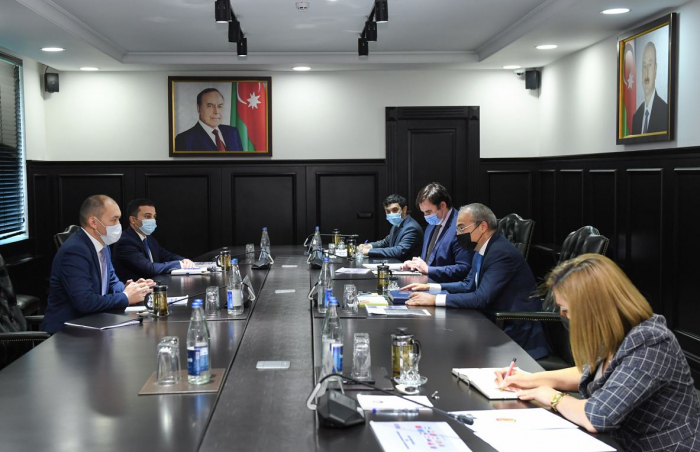 Azerbaijan's strategic location at the intersection of international corridors makes it possible to implement large-scale transport and infrastructure projects in the country, Minister of Economy Mikayil Jabbarov said, AzVision.az reports on June 9.

Jabbarov made the remark at a meeting with the Secretary General of the Permanent Secretariat of the TRACECA Intergovernmental Commission Aset Asavbayev.

Minister notes, the measures taken towards the development of regional transport corridors and the reconstruction of road and rail lines based on international standards contribute not only to strengthening the transit potential of Azerbaijan, but also to increasing the competitiveness of TRACECA.

He noted that Azerbaijan is an initiator and active participant in international and regional transport projects.

Stressing the importance of partnership within the TRACECA framework, Jabbarov noted that the implementation of the transport capabilities of the member states further increases the transit and logistics attractiveness of the region, creates a basis for promoting shipments, intensifying trade, economic and cultural ties, and also enhances economic potential.

Secretary General Asavbayev, stressing the role of the international transport corridor in encouraging transport between the member states and strengthening economic partnership, noted that the work done has become an important part of the transport map of Eurasia.