Azerbaijani parliament speaker meets with her counterpart from Bosnia and Herzegovina 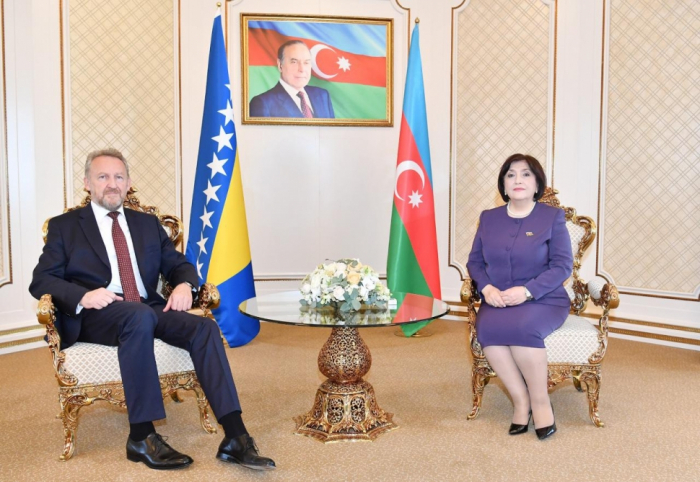 On June 9, Speaker of the Azerbaijani Milli Majlis (Parliament) Sahiba Gafarova met with Speaker of the House of Peoples of the Parliamentary Assembly of Bosnia and Herzegovina Bakir Izetbegovic who is on an official visit to the country, the parliament’s press service told AzVision.az.

Speaker Bakir Izetbegovic familiarized himself with the conditions created at the administrative building of Milli Majlis.

During the meeting, the sides hailed the current level of bilateral relations. They noted the importance of expanding cooperation in several areas.

Speaker of Milli Majlis Sahiba Gafarova praised the development of relations between Azerbaijan and Bosnia and Herzegovina, adding that these relations are based on the principles of friendship and mutual respect. She said that Bakir Izetbegović’s visit will contribute to further development of mutual relations.

Noting that the treaty-legal framework existing between the two countries provides ample opportunities for expanding cooperation in various areas, Speaker Gafarova mentioned that in particular the humanitarian projects implemented so far serves the advancement of friendly bonds between the two nations. She also emphasized the activities of the Heydar Aliyev Foundation in this area.

Sahiba Gafarova recalled the document about the aggression of Armenia against Azerbaijan and about the recognition of the Khojaly genocide which the House of Peoples of the Parliamentary Assembly of Bosnia and Herzegovina passed a few years ago and which expressed the recognition of, and respect for the sovereignty and territorial integrity of the Azerbaijan Republic, adding that the adoption of such a fair document was highly appreciated in Azerbaijan.

Speaker of Milli Majlis highlighted Azerbaijan’s victory in the 44-day Patriotic War in 2020. “The leadership of Commander-in-Chief President Ilham Aliyev and the valour of our victorious Army made certain that the 30-year-long Armenian occupation was over. Besides, Azerbaijan enforced the four resolutions of the UN Security Council concerning the past conflict on its own as Azerbaijan made its national territory whole again. The conflict between Armenia and Azerbaijan is history already whereas Azerbaijan has begun restoring and rebuilding the liberated territories,” Sahiba Gafarova said.

Speaker Gafarova mentioned that Armenia had demolished Azerbaijani towns and villages, destroyed its historic and cultural heritage, plundered the national wealth, desecrated religious shrines and mosques during the thirty years of occupation. The whole infrastructure of those provinces had been annihilated. “Armenia will not desist from its provocative encroachment now, either. Many of our servicemen and civilians had tripped the mines planted by the Armenian side in the de-occupied provinces after the war had been finished. Armenia is refusing to provide Azerbaijan with the minefield maps despite the repeated calls from Azerbaijan. In this way, Armenia is breaching the international humanitarian laws and is committing further war crimes. Three Azerbaijanis were killed by a detonating mine as they were fulfilling their professional duties on 4 June; two of them were journalists,” the Speaker added.

“Armenia is resorting to provocations as far as delimitation of the borders is concerned, too. The provisions of the trilateral statement of 10 November 2020 are being broken rudely: “Armenia continues sending terrorist squads to our liberated lands and then tries to make the terrorists apprehended on the Azerbaijani side after the signing date of that trilateral agreement look as ‘prisoners of war’,” Speaker Gafarova underlined.

Touching upon the relations between the two countries’ legislative authorities Sahiba Gafarova emphasized the significance of parliamentary delegations’ reciprocal visits and continued progress of the interparliamentary relations. She also highlighted the importance of the bilateral cooperation within the international parliamentary institutions.

Speaker Sahiba Gafarova highlighted the energy projects implemented on Azerbaijan’s initiative, their great importance in maintaining the energy security of Europe, the multiculturalism policy of our country and other issues.

Speaker of the House of Peoples of the Parliamentary Assembly of Bosnia and Herzegovina Bakir Izetbegović thanked for the warm welcome and heartfelt hospitality. “The political relations between our countries are setting high standard; Bosnia and Herzegovina is keen on deepening the ties with Azerbaijan further; our high-level political bonds are having a positive effect on the economic, cultural and humanitarian areas,” Izetbegović added. 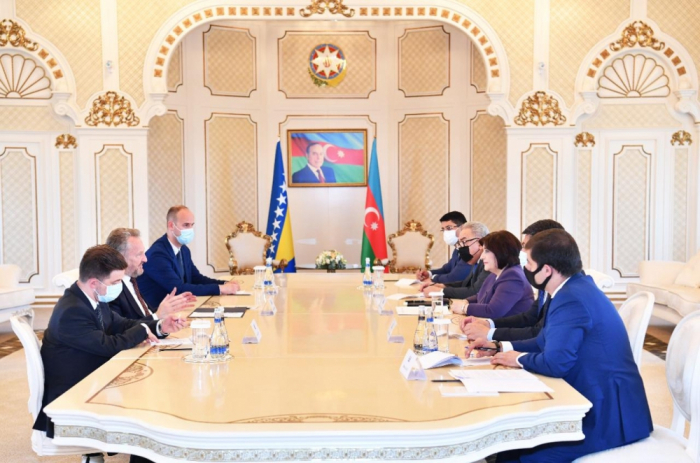 Bakir Izetbegović recalled his visit to Baku in 2012 and mentioned the dynamic development of Azerbaijan over these past years. He hailed Azerbaijan’s restoration of its territorial integrity, adding that Azerbaijan also restored justice. Izetbegović said he visited Aghdam yesterday as part of his official trip to Azerbaijan. He stressed that he had seen the destruction caused by Armenia with his own eyes, adding that he hoped that he was going to see Aghdam restored and rebuilt fully on his next arrival in Azerbaijan.

Bakir Izetbegović informed Speaker of Milli Majlis Sahiba Gafarova of the work underway in his country.