Erdogan-Biden meeting an indicator for other US allies 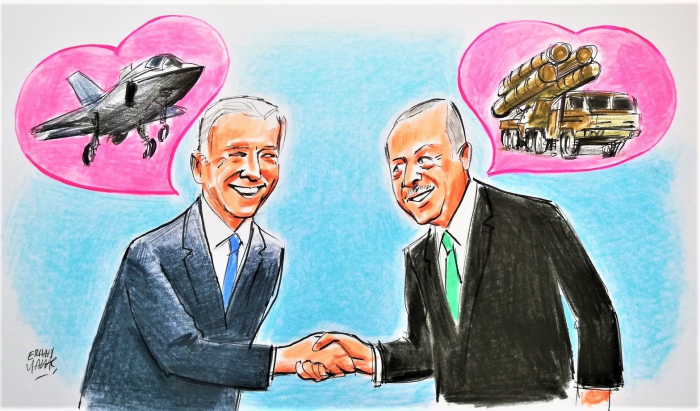 Yesterday, one of the most significant summit meetings between Turkey and the U.S. took place in Brussels on the sidelines of the NATO summit. President Recep Tayyip Erdoğan met with U.S. President Joe Biden for the first time since his election as U.S. president.

Given the state of U.S.-Turkish ties and the rather rocky start to relations between the two administrations, there were a lot of questions being asked and speculations being made before the meeting.

It is safe to say that the Erdoğan-Biden meeting is a key indicator for U.S. foreign policy and U.S. allies' future relations with the country.

First of all, before looking at any existing crisis in relations, it is important to remember that this is the fourth U.S. president Erdoğan has engaged with as head of government or state.

Erdoğan's positions on relations have been very consistent. However, he has faced the significant challenge of navigating the constantly shifting and an increasingly unpredictable U.S. foreign policy.

He met with four presidents with different agenda items. The first three of these presidents did not have prior experience or robust interest in foreign policy, nor did they have much information on the state of U.S.-Turkish relations.

Biden is different, in terms of his keen interest in foreign policy and previous engagement with Turkey as the U.S. vice president.

It is not yet clear if this will have a positive impact on bilateral relations or not. While his reputation as an “engager” was interpreted positively, his rather opinionated stance about the Turkish government that he expressed during his campaign generated questions about how his foreign policy would approach Turkey.

After spending almost five months as president, we will see Biden diplomacy in action. In 2016, after visiting Turkey following the July 15 coup attempt, he expressed his regrets for not visiting Turkey earlier to demonstrate America's support.

We will see whether he will regret not engaging with Turkey at the presidential level earlier.

Secondly, many observers have criticized U.S. foreign policy for not paying enough attention to the diplomatic resolution of disputes and disagreements. U.S. presidents over the course of the last 20 years have preferred to opt for military responses or economic sanctions.

It resulted in a situation in which the U.S. failed to deliver results in varying crises across the world.

One of the early promises of the Biden administration was to revive diplomacy and rebrand the U.S. as a diplomatic power, as well as a military power. Now, it is time for the test.

For almost the last decade, U.S. foreign policymakers have used the threat of sanctions in order to pressure Turkey to do what Washington wants.

Certain issues, like that of the S-400s, did not go away even after the adoption of sanctions. Since his first day, all eyes have been on the Biden administration and its ambitious agenda of reviving diplomacy, watching whether it can work with Turkey to resolve the S-400 impasse.

Very much related to the concept of reviving diplomacy, the meeting is also significant in understanding whether Biden really is trying to establish better relations with U.S. allies.

For the last 20 years, different forms of unilateralism in U.S. foreign policy generated a crisis of confidence between U.S. allies and the U.S.

In many instances, not only were the objections and concerns of U.S. allies ignored by the American government, but it engaged in actions deemed unacceptable by its allies, including eavesdropping on the phone conversations of leaders of NATO member countries.

Of course, in the meantime, the U.S.' actions towards a fellow NATO ally were followed by other NATO countries with great concern.

Now Biden is trying to reassure the U.S.' allies that “America is back,” promising to fix its relations and the crisis of confidence. His meeting with Erdoğan was for that reason watched closely by the U.S.' other allies who are trying to figure out whether the U.S. is truly committed to handling the issue.