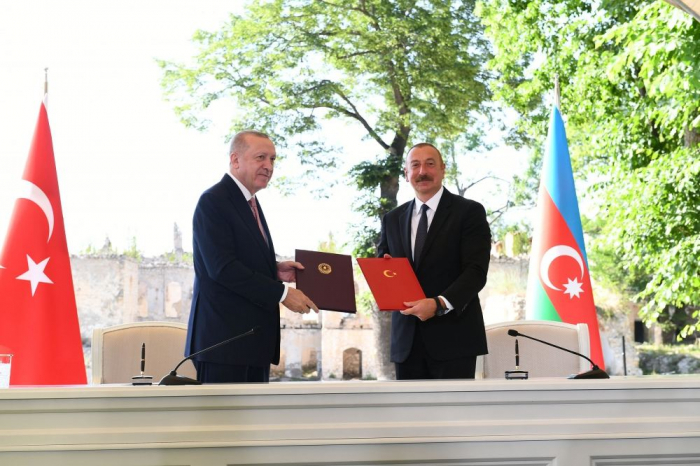 The Shusha Declaration on Allied Relations cements the relationship between Azerbaijan and Turkey beyond words, said US journalist and analyst Irina Tsukerman.

In her words, this is an important development that will deepen the strategic relationship between Azerbaijan and Turkey.

“To understand what it entails, the fact that it is called the "Shusha Declaration" is both symbolic and significant, and it is important to understand the meaning of this step. Shusha, one of the major liberated cities in Karabakh, was once known for being a cultural gem of Azerbaijan, particularly in terms of music. Its liberation was a turning point in the second Karabakh war, and completely demoralized the Armenian military, leaving them scattered,” she said.

At the same time, she added, the re-taking of Shusha energized the Azerbaijani armed forces and played a significant part in the swift battle victories which followed.

“For that reason, Shusha is a symbolic reference to all of the Karabakh, and underscores the importance of that territory for the future of Azerbaijan, its sovereignty, and the role it seeks to play in South Caucasus,” Tsukerman said.

Therefore, Tsukerman said, the Declaration works on several levels: reminding both peoples of the rich cultural heritage of the area, about to be restored to greatness, and which also fuels cultural relations between Azerbaijan and Turkey, as well as recognizing Turkey's important role as a political ally during the war, which means that after Azerbaijan secured the territory it sees to welcome its good friends who provided vital moral and political support to advance these relations on economic level in the development of this important region and hopes to see their involvement in peaceful endeavors which will ultimately benefit all of the region.

“It bestows recognition on Turkey as an important ally and cements this relationship beyond words and grassroots understanding of cultural and historic ties between its peoples, and sends a message to both friends and adversaries that this relationship and alliance is growing and can be counted upon in many ways in the future,” she added.