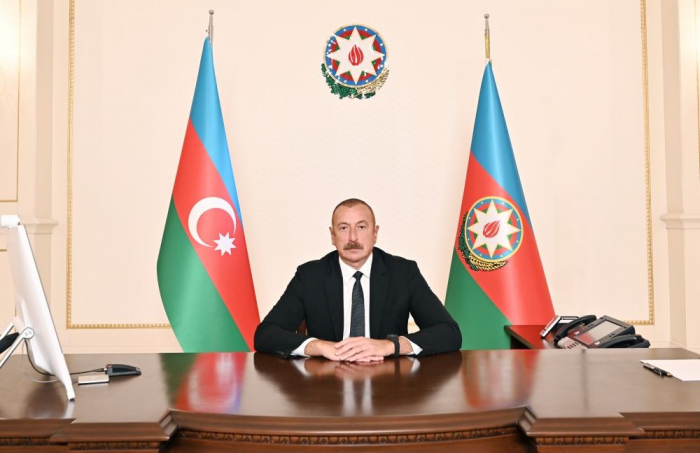 The Second Summit of the Organization of Islamic Cooperation (OIC) on Science and Technology was held online.

Azerbaijani President Ilham Aliyev delivered a speech at the event in a video format.

Statement by Ilham Aliyev, President of the Republic of Azerbaijan

I would like to express my gratitude to the Government of the United Arab Emirates and the General Secretariat of the Organization of Islamic Cooperation (OIC) for organizing the Second OIC Summit on Science and Technology.

Azerbaijan is an active member of the OIC family and closely cooperates with Member States both bilaterally and within international organizations.

Over the past few years, about 10 meetings of the ministers of foreign affairs, culture, tourism, education, labour and other ministers of the OIC member countries have been held in Azerbaijan.

Azerbaijan has always made efforts to strengthen solidarity among Islamic countries, one reflection of which was hosting the 4th Islamic Solidarity Games in 2017 with the participation of 54 states. We have also launched a scholarship program for citizens of the OIC Member States to study in our country.

We highly appreciate the consistent support of the OIC for the just position of Azerbaijan with regard to Armenia’s military aggression. Since the Casablanca Summit of the OIC in 1994, over 80 resolutions have been adopted condemning the aggression of Armenia against Azerbaijan, and supporting our sovereignty and territorial integrity. The establishment of the OIC Contact Group on the aggression of the Republic of Armenia against the Republic of Azerbaijan in 2016 needs to be particularly mentioned to this end.

For its part, Azerbaijan has always supported the OIC Member States, and strived for ensuring stronger solidarity and cooperation among Islamic countries.

The COVID-19 pandemic has created unprecedented challenges for the world. In its capacity, as the chair of the Non-Aligned Movement, Azerbaijan initiated and successfully held the NAM Summit in response to coronavirus in May 2020. We also initiated the holding of the Special Session of the UN General Assembly at the level of the heads of state and government in December 2020.

Azerbaijan has made voluntary financial contributions to the World Health Organization in the amount of $10 million and provided humanitarian and financial assistance to more than 30 countries, including a number of OIC Member States with respect to coronavirus.

We remain deeply concerned by the “vaccine nationalism” and inequality in access to vaccines between developing and developed countries. According to international reports, so far, more than 82 per cent of the world’s vaccine doses have been purchased by wealthy countries, while only 0.3 per cent have gone to low-income countries.

Four UN Security Council resolutions of 1993 demanding immediate, complete, and unconditional withdrawal of the armed forces of Armenia from Azerbaijan’s occupied territories, declarations of the Non-Aligned Movement, resolutions of the OIC, relevant decisions of the OSCE and other international organizations constituted a legal basis for the settlement of the conflict. However, Armenia did not comply with demands of the international community and tried to keep our lands under occupation forever. In July, August and September of 2020, three times, Armenia resorted to military provocations along the state border and the former line of contact, killing innocent civilians and instigating the war.

In response to the large-scale military attack launched by Armenia last September, Azerbaijan conducted a counter-attack operation, which resulted in liberation of a large part of occupied territories.

After the total defeat in the 44-day Patriotic War, Armenia had to sign an act of capitulation on 10 November 2020 and was obliged to withdraw its troops from the remaining part of Azerbaijan’s territories. Azerbaijan, itself, ensured the implementation of the UN Security Council resolutions of 1993.

We highly appreciate the resolute stance demonstrated during the war by the OIC. The OIC issued statements supporting Azerbaijan. Particularly, I would like to express my gratitude to Turkey, Pakistan and Afghanistan, which expressed political support to us from the first days of the war.

During 30 years of occupation, Armenia has deliberately destroyed all cultural and religious sites of Azerbaijan in the occupied territories. Out of 67 mosques in the territories which

were under Armenian occupation, 65 have been razed to the ground and the remaining 2 have been severely damaged and desecrated.

I will send to my colleagues an illustrative book which contains brief info and photos of our towns and villages before and after the occupation reflecting the total devastation and destruction of all religious and historic monuments of Azerbaijan.

In resolutions, the OIC strongly condemned the destruction and desecration of Islamic historical and cultural relics and shrines by Armenia in the formerly occupied territories of Azerbaijan.

Using this occasion, I would like to express my special gratitude to H.E. Mr. Yousef bin Ahmad Al-Othaimeen, Secretary-General of the OIC for paying a visit to Azerbaijan this April and for his sincere words of congratulation with respect to our victory. During his term in office, the Secretary-General has visited Azerbaijan six times which is the reflection of his support and respect for our country. He made significant contribution to increasing the international influence of the OIC and enhancing the solidarity among the OIC Member States.

We observe attempts by Armenia to strengthen its relations with Islamic countries. A country that used our mosques as stables for pigs and cows and insulted the feelings of all Ummah cannot be a friend of Muslim countries and Muslims.

Since the topic of today’s summit is about science and technology, I would like to highlight that strengthening the scientific and technological potential of the country is among our top priorities.

Azerbaijan is a member of the international space club. Today, we have 3 satellites - 2 for telecommunication and one earth observation satellite.

Azerbaijan was selected to host International Astronautical Congress to be held in 2023. It is a sign of recognition of Azerbaijan’s achievements in this sphere by the international space community.

Recently, I identified five national priorities on socio-economic development for the next decade of Azerbaijan, one of which envisages creating competitive human capital and space for modern innovations.

The Government takes tangible steps for the development of innovation and startups ecosystem.

Azerbaijan signed an agreement with the World Economic Forum to establish Azerbaijan Affiliate of the Centre for the Fourth Industrial Revolution Network.

We would like to see companies from brotherly OIC countries participate in the reconstruction process of the liberated territories.