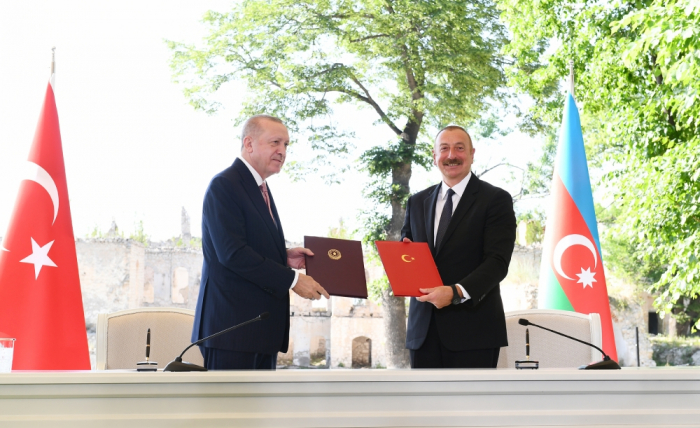 After the victory of Azerbaijan in the 2nd war of Karabakh, the South Caucasus Region (SCR) has now become new “hub” of socio-economic integration, geopolitical manoeuvring and geostrategic concessions. The Republic of Azerbaijan the “Queen” of the new chessboard of power politics has the comparative advantage and position of strength to deal with Armenia and other regional countries.

Azerbaijan and Turkey signed a Protocol of Alliance (PA) on June 15, 2021, which pledged to support each other in case of threat or attack by a third country. Azerbaijan President Ilham Aliyev and Turkish President Recep Tayyip Erdogan signed the agreement during a visit to the city of Shusha conquered by Azerbaijan forces during last year’s war with Armenia in the Nagorno-Karabakh region. Erdogan termed it a road map that aims to increase bilateral political and military cooperation.

According to PA in case of a threat or attack on the independence or territorial integrity of any of the parties by a third state, the parties will provide the necessary assistance to each other. It envisages the opening of the Zangezur corridor from the Nagorno-Karabakh region to a railway line through Nakhchivan and Turkey’s eastern Kars province. Turkey will open a general consulate in Shusha to support Azerbaijan in rebuilding the Nagorno-Karabakh region.

The SD aims to facilitate cooperation between Azerbaijan and Turkey in the spheres of defense, economy, energy, trade, diaspora and media and other areas of mutual interest. President Ilham Aliyev said the declaration refers to the Kars Agreement that was signed a century ago, which has a great symbolic meaning for the two countries.

It has numerous befitting propositions which have national, regional as well as international repercussions. At the international level, it promotes regional cooperation, joint collaborations, political consultations, economic and trade relations, culture, education, sports, youth policy and practically all other associated areas. It highlights the importance of energy security and the Southern Gas Corridor (SGC) for Turkey, Azerbaijan and Europe.

It has also certain defense orientations. It reflects mutual military assistance which is a historic achievement. We are showing again that we will always be together. It is the guarantor of independence, sovereignty, territorial integrity, inviolability of the internationally recognized borders, and security of each country.

The SD emphasizes joint efforts to modernize the armed forces of the two fraternal countries, implement measures aimed at strengthening defense capabilities and military security, increase the joint capacity of the two countries armed forces and establish close cooperation in modern weapons and ammunition management. It seems that the Security Councils (SCs) of both countries are tasked with holding joint meetings on national security issues and discussing regional and international security developments concerning the national interests of Turkey and Azerbaijan.

The iron brothers Azerbaijan and Turkey have literally conquered new castles of sovereignty, comfort, prosperity and of course national dignity. Now it is the ideal time of dances, celebrations, feats, and reunions and Shusha Declaration (SD) is the vivid reflection of pure brotherhood, mutual respect, political harmony, military deterrence, peaceful co-existence and above all greater socio-economic prosperity and trans-regional connectivity.

It has actual formed a new political reality in the SCR. It is indeed an innovative balancing act of both sides which has certain socio-economic, geopolitical and geostrategic befitting ramification for both countries.

It has further strengthened bilateral relations between Azerbaijan and Turkey due to which it is estimated that bilateral trade between the two countries may reach up to US$15 billion by 2022-2023. It has created a new strategic power equation in the SCR which will now reckon with the new conditions in the region. The international theory of Middle Power has now been updated and new influential power brokers have been further consolidated in the shape of new Sultans of the SCR, Azerbaijan and Turkey.

The timing and utility of the SD are significant because it apparently endorsed by the Presidents of US and France and moreover, and support of Vladimir Putin as mentioned by the Turkish president during his speech. It would hopefully start transport links in the SCR. It is indeed development-oriented.

It has spirits of positivity, productivity and participation in the SCR and beyond. Turkish president while in Azerbaijan thoroughly discussed the chances of the opening of the Zangezur corridor with Azerbaijan. Widespread deadly landmines are the real threats to the development of SCR due to which Azerbaijan, Russia, Turkey should jointly put pressure on Armenia to provide the maps of minefields. The intensive development of the region will be beneficial for Armenia as well since communications are unblocked, new ways will open and many projects, including investment megaprojects, will also be started soon.

Foreign Ministry Spokesperson Leyla Abdullayeva termed the SD as the first giant step towards greater peace and security, and new cooperation opportunities. She rebuked the Armenian foreign ministry side not to use the phrase “Turkish-Azerbaijani aggression” in its ill-conceived statement It does not any agenda of hegemony rather it is the vivid reflection of regional harmony. Armenia’s foreign ministry strongly condemned Erdogan’s visit to Shusha calling it “an outright provocation against regional peace and security.

The SD signed on June 15, 2021, has further strengthened bilateral ties between Baku-Ankara and the unblocked of regional transport communications. As a true statesman and strategist Erdogan offered Armenia to be part of a six-sided regional platform that includes Russia, Turkey, Azerbaijan, Armenia, Georgia, and Iran.

Critical analysis of the war threat of 2nd Karabakh reveals that Turkish Bayraktar TB2 unmanned aerial vehicles (UAV) played an important and decisive role and provided Azerbaijan with an upper hand in the last year’s war with Armenia in the Karabakh region. The drone fleet of the Azerbaijani army, which includes Bayraktar TB2 and cutting-edge Israeli-made UAVs and loitering munitions, is said to have destroyed more the 200 pieces of armour and artillery systems of Armenia during the 2nd war of Karabakh.

Turkish weapons have been widely used in modernizing the Azerbaijani army’s arsenal in recent years. According to the latest official data (January 2021), between January and April 2021, Azerbaijan was the second-largest buyer of Turkish weaponry after the United States. The value of arms exports to Azerbaijan was US$117.3 million in the same period.

The Turkish President also delivered a speech to the Azerbaijani parliament and attended the Euro 2020 football match in Baku between Turkey and Wales.

Being a prominent regional expert of Azerbaijan and CIS I term Shusha Deceleration as first giant step towards greater socio-economic integration and regional connectivity. It is indeed a gigantic balancing act to create new geopolitical reality in the SCR. It has created new rules of engagements in the SCR and beyond. It guarantees the sovereignty and national pride of both countries.

South Caucasus Region (SCR) has now entered into a new phase of cooperation, coordination and collaboration. War is now over and some swapping of prisons and sharing of landmines have also been initiated between Azerbaijan and Armenia which has created a new window of opportunity in terms of economic cooperation, food & energy security, infrastructural development and valuable transportation corridors in the SCR.

Chances are very high that mutual cooperation would also be further strengthened between Azerbaijan and Turkey. A joint production of Azerbaijan-Turkey Drones would be initiated as soon as possible. Joint collaboration in the 5th generation fighter jet would be a game-changer in the SCR. To conclude, close liaison in Artificial Intelligence Technologies (AITs) would further protect the socio-economic, geopolitical and geostrategic vested interests of both countries. Trilateral Security Dialogue among Azerbaijan, Pakistan and Turkey would further consolidate socio-economic, geopolitical and geostrategic orientations of the Shusha Deceleration in the days to come.

Dr. Mehmood Ul Hassan Khan is a Member of Board of Experts of the Center for Global and Strategic Studies (CGSS) of Pakistan and regional geopolitical analyst.