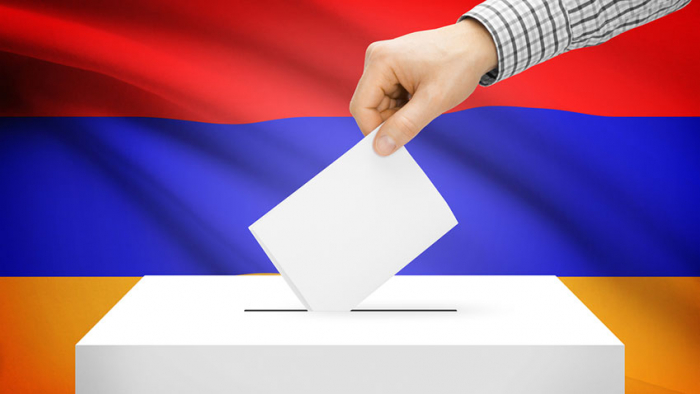 On June 20, 2021, Armenians will head to the polls to cast their vote as to who will lead the country during the current political crisis.

A newly released poll by EVN Report conducted by the Armenian Election Study casts the electorate as largely pessimistic about the candidates and largely undecided about their vote preference. Despite this, the poll findings demonstrate that Civic Contract Party, led by acting Prime Minister Nikol Pashinyan, would win the plurality of the votes but fall short of securing a single-party majority government. Former President Robert Kocharyan’s Armenia Alliance is predicted to secure a second-place finish. Consequently, the June 2021 election may not serve as a political panacea and may in fact create more governing challenges. The polling results indicate three important developments: 1) Acting Prime Minister Pashinyan remains the most popular and most trusted candidate in the field; 2) Robert Kocharyan has made important inroads and is well-placed to lead the second largest grouping in parliament; and 3) high number of Armenian voters are either undecided, or do not prefer any of the current candidates.

The 2021 parliamentary election poll commenced on May 31, 2021. The telephone (mobile and landline) survey relied on a random digit dialing technique and sampled respondents in accordance with the population size and regional makeup of registered voters, based on the Central Election Commission’s regional distribution of registered voters. Respondents were asked six questions related to the upcoming election as well as their sociodemographic and socioeconomic characteristics. The survey concluded on June 16 with a sample size of 800 respondents. At the 95 percent confidence level, the margin of error is 3%. 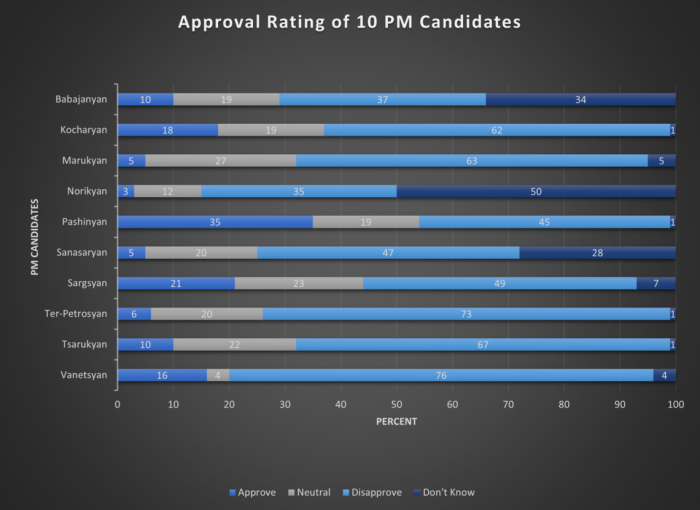 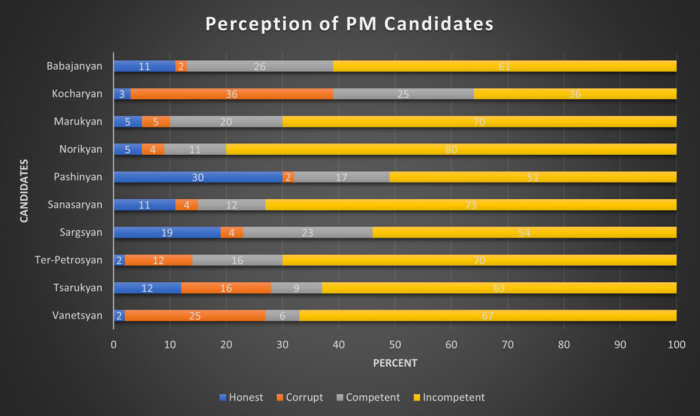 The poll also gauged the perception of voters on the integrity and competence of the candidates. Citizen confidence in the competence of the candidates remains quite negative, with the most competent candidate being Arman Babajanyan at 25%, followed by Robert Kocharyan at 25% and Armen Sargsyan at 23%. Acting Prime Minister Nikol Pashinyan’s competence rating stood at 17%, while perceptions of his incompetence marked 51%. Kocharyan displayed the lowest incompetence rating at 36%, while the other candidates associated with the previous regimes demonstrated very high perceptions of incompetence: Ter-Petrosyan at 70%, Vanetsyan at 67%, and Tsarukyan at 63%. Collectively, all candidates had a net negative perception on competence. On the issue of honesty, however, Pashinyan was ranked as the most honest candidate at 30%, followed by Sargsyan at 19%, while Kocharyan (3%), Ter-Petrosyan (2%), and Vanetsyan (2%) ranked as the least honest candidates. Similarly, Kocharyan was viewed as the most corrupt politician in the poll at 36%, followed by Vanetsyan (25%), and Tsarukyan (16%). Pashinyan and Babajanyan were the least corrupt candidates at 2% respectively, followed by Sanasaryan (4%) and Marukyan (5%). Collectively, candidates associated with the previous regimes were deemed the most corrupt and least honest politicians, while pro-Velvet candidates were deemed as more incompetent, but more honest. 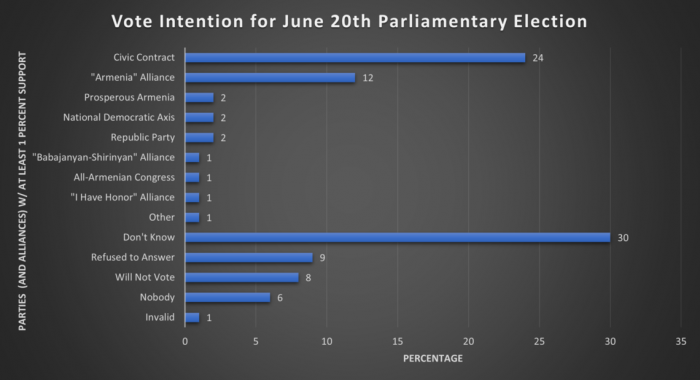 To gauge voter intention, respondents were asked which party or coalition they would vote for at the June 20 Parliamentary elections. The results suggest a highly polarized voter preference, with no single party reaching majority, and a large number of parties failing to meet the threshold. Civic Contract showed the strongest performance in the poll at 24%, doubling the Armenia Alliance, which garnered 12%. The remaining parties vying for the third spot all registered 2% support, which included Prosperous Armenia Party, Republic Party, and National Democratic Axis. Ter-Petrosyan’s Armenian National Congress only garnered 1% support, as did the I Have Honor Alliance, represented by Vanetsyan but dominated by former President Serzh Sargsyan. Further, the findings demonstrate instances of voter cannibalism among the parties associated with the previous regimes. The drop in support for Prosperous Armenia Party and the I Have Honor Alliance are being absorbed by Kocharyan’s Armenia Alliance, as both groupings have displayed a demonstrative drop from their previous electoral and polling performances. Finally, a large number of voters, 30%, noted that they remain undecided on who to vote for, while 6% said they do not prefer any of the candidates, and 8% stated they will not participate in the elections.

In the discourse seeking to draw a dichotomy between democracy and security, a majority of Armenian citizens reject the dichotomy. When asked if citizens prefer security over democracy, democracy over security, or a balanced approach to prioritize both, respondents overwhelmingly choose the prioritization of both at 54%. 43% of respondents, on the other hand, preferred security over democracy. Contextually, a healthy majority of Armenian society rejects the dichotomy of prioritizing one over the other. 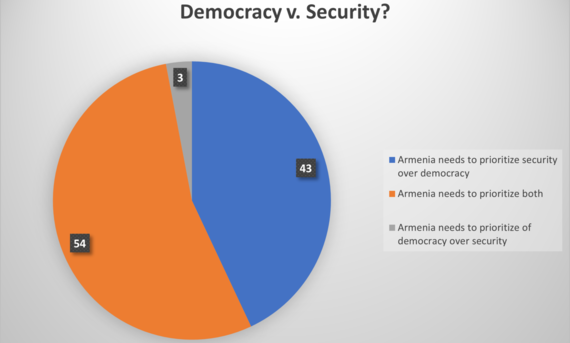 When disaggregating the data on security versus democracy for each candidate, the findings show that Kocharyan’s voters overwhelmingly choose security over democracy by 61%, while 38% support prioritization of both. Only 1% of Kocharyan voters choose democracy over security. Pashinyan’s voters, on the other hand, demonstrate the exact opposite, as 32% support security over democracy, while 63% support the prioritization of both, with 5% choosing democracy over security. Collectively, considering the post-war period and the crisis related to the border incursions by Azerbaijan and the complexities of border demarcations, the concerns of security remain crucial to citizen preference. Kocharyan’s voters, however, prefer security at the expense of democracy, while Pashinyan voters overwhelmingly prefer a balance, thus rejecting the dichotomy of choosing one at the expense of the other. 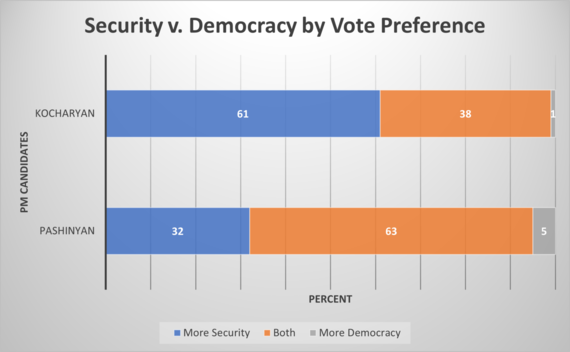 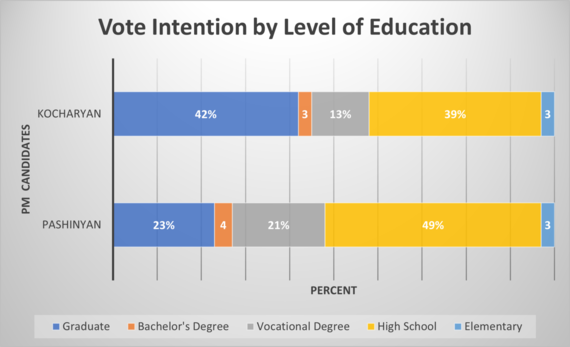 Disaggregation and isolation of the vote distribution in the various regions (marzes) offers an important picture in understanding voter preferences between the two leading candidates. We isolated each region and observed the two-party vote distribution, thus observing each candidate's performance in each of the 11 regions. The overall picture suggests thorough dominance of Pashinyan of all the regions outside Yerevan with the exception of Syunik, where Kocharyan’s vote percentage is at 71%, while Pashinyan’s is at 29%. The vote percentages, however, are the opposite in the rest of the regions. In Aragatsotn, Pashinyan secured 71%, while Kocharyan received 29%; in Ararat the discrepancy is even larger, with Pashinyan at 87% and Kocharyan at 13%. Gegharkunik displays the largest discrepancy in the two-party vote percentage, with Pashinyan securing 95%. The numbers in Lori (Kocharyan 16% and Pashinyan 86%) and Armavir (Kocharyan 19% and Pashinyan 81%) also contribute to the lopsided distribution. These discrepancies in the regions are slightly narrowed in Kotayk, where Pashinyan still dominates with 59%, but Kocharyan manages to secure 41%. Similarly, Kocharyan’s numbers in Shirak at 32% are relatively better, but Pashinyan still dominates with 68%. The most competitive region remains Yerevan, with Kocharyan leading 51% to Pashinyan’s 49%, thus supporting the general theory that Pashinyan’s voter base is heavily rural, while Kocharyan’s voter base is urban and better-educated.

The 2021 Armenian Parliamentary Election Poll was conducted by Rafael Oganesyan, Director of the Armenian Election Study