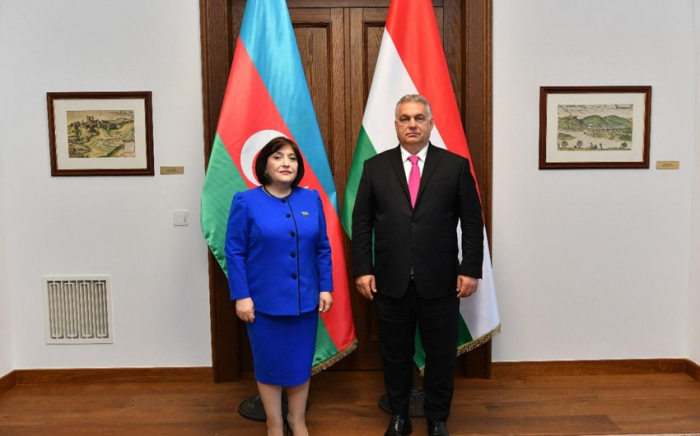 Speaker of the Azerbaijani Parliament (Milli Majlis) Sahiba Gafarova has met with Prime Minister of Hungary Viktor Orban as part of her official visit to Hungary, AzVision.az reports.

Hungarian PM stated that the delegations from Azerbaijan are always special guests for the Hungarian people and state. The Prime Minister highlighted the significance of mutual visits and expressed confidence that this visit will contribute to the development of relations between our countries.

Orban noted the development of ties between the legislative bodies of the two countries, especially emphasizing the activities of friendship groups.

“Hungary attaches great importance to the development of relations with Azerbaijan, and the current political, economic, cultural and humanitarian cooperation between the countries is moving upward,” the Hungarian PM said.

In the course of the meeting, Gafarova and Orban also discussed broad cooperation between Hungary and Azerbaijan in the energy sector.

Gafarova expressed gratitude for the sincere welcome and conveyed greetings from Azerbaijan’s President Ilham Aliyev to the prime minister of Hungary, noting satisfaction with her first official visit to Hungary as the speaker of the Azerbaijani Parliament.

“Azerbaijan attaches great importance to the development of cooperation with Hungary, one of the states that was the first to recognize its independence,” the speaker added.

She noted that the political ties of the two countries after Azerbaijan achieved state independence rose to a new level, emphasized the enormous efforts of President Ilham Aliyev and Prime Minister Viktor Orban in this.

Azerbaijani Parliament speaker said that the legal documents signed so far on cooperation between the two countries are of key importance.

Gafarova pointed out the latest indicators of trade turnover between Azerbaijan and Hungary, highlighting the potential for further increase in trade.

She noted that Azerbaijan is a large economic center of the South Caucasus, as well as a reliable partner in ensuring energy security and an important party in the diversification of energy supply routes to Europe, and emphasized the importance of the TANAP and TAP pipeline projects in this context.

Noting the existence of high-level humanitarian ties between the two countries, Gafarova touched upon the projects implemented in Hungary with the support of the Heydar Aliyev Foundation, emphasizing that the First Vice-President of Azerbaijan Mehriban Aliyeva was noted with a high award of Hungary for merits in this field.

“There are mutual parliamentary friendship groups in both legislative bodies, the MPs successfully cooperate within international parliamentary organizations. It is very gratifying that Hungary is strengthening its unity with the Turkic world both at the state and parliamentary levels, as well as the fact that the Hungarian National Assembly has observer status in the Parliamentary Assembly of Turkic Speaking States (TURKPA),” the speaker said.

“In 2020, Azerbaijan won a brilliant victory in the 44-day Second Karabakh War and liberated its lands from the Armenian occupation. I express gratitude to the Hungarian people and state both on my own behalf and on behalf of the Parliament for supporting the fair position of Azerbaijan, demonstrated during the 44-day war. With the liberation of the country's lands from occupation, work began in Karabakh on restoration and creation. However, Armenia prevents this by refusing to provide maps of minefields, due to which military personnel and civilians, including journalists, are killed or injured. Besides, the Armenian side makes provocations on the border, creates difficulties in delimitation and demarcation of borders,” Gafarova said.

Gafarova expressed her gratitude to the Hungarian side for assistance in demining the liberated territories of the country, saying that this assistance is a manifestation of Hungary's friendly attitude.

During the meeting, Viktor Orban asked to convey his greetings to the President of Azerbaijan Ilham Aliyev.

Further, at the meeting, an exchange of views took place on issues of interest to both sides.