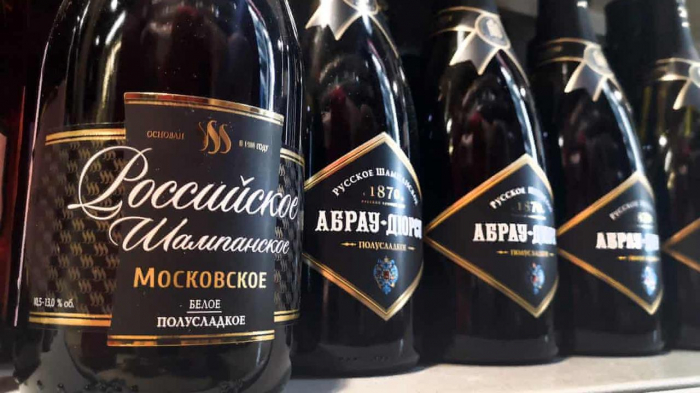 France has hit back at a new Russian law ordering French champagne makers to label their bottles as sparkling wine.

France has strict rules protecting its bubbly, meaning to be called champagne it must be from the French region that shares the name.

But under Russia's new law, only local producers can call their drinks "shampanskoye" - the Russian equivalent of champagne.

Under the new legislation - signed by Russian President Vladimir Putin on Friday - foreign producers of sparkling wine are ordered to describe their products as such on the back of the bottle.

French producers are still allowed to use the word champagne on the front of bottles, but the use of "shampanskoye" is allowed only on local produce.

Moët Hennessy, France's most well-known champagne-maker, suspended deliveries to Russia over the weekend before adding the "sparkling wine" label on bottles it shipped there to comply with the law.

On Tuesday, French Agriculture Minister Julien Denormandie weighed in on the debate, insisting that only Champagne's vineyards can truly use the name.

"You can imagine the reaction of the French authorities," Mr Denormandie told Sud Radio.

"The word champagne comes from that beautiful region of France where champagne is produced," he said.

France produces around 231 million bottles of champagne a year. It makes around €2.5bn (£2.1bn; $2.9bn) from exports, with the UK and US the biggest customers.

Russia imports almost 50m litres of sparkling wine every year. French champagne represents 13% of this market and Moët Hennessy 2% of this.

French media have suggested Moscow's move could be part of an effort to revive the shampanskoye sparkling wine industry in its Soviet-era home of Crimea, which Russia annexed from Ukraine in 2014.

Champagne is designated under France's Appellation d'Origine Controlee (AOC) system, which is supposed to give them exclusive use of the word in countries that follow EU laws on distinctive geographical indications.