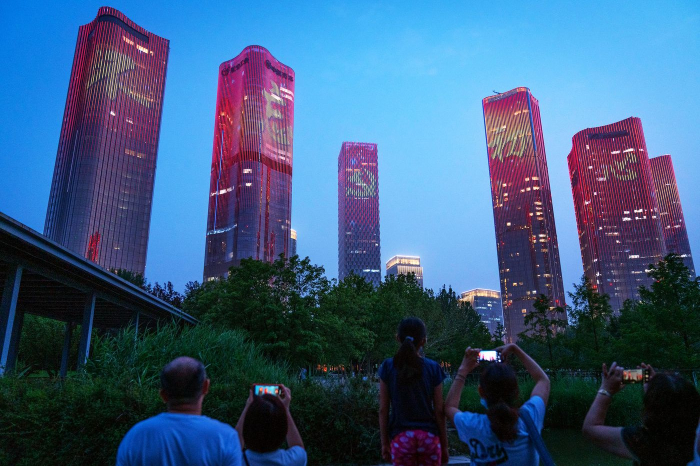 When will China overtake the U.S. to become the world’s biggest economy?

Few questions are more consequential, whether it’s for executives wondering where long-term profits will come from, investors weighing the dollar’s status as global reserve currency, or generals strategizing over geopolitical flashpoints.

In Beijing, where they’ve just been celebrating the 100th anniversary of the Chinese Communist Party, leaders are doing their best to present the baton-change as imminent and inevitable. “The Chinese nation,” President Xi Jinping said last week, “is marching towards a great rejuvenation at an unstoppable pace.”

Early in the Covid-19 crisis, when China managed to control infections and maintain growth even as the U.S. suffered hundreds of thousands of deaths and a crunching recession, many were inclined to agree. More recently, an unexpectedly fast U.S. recovery has illustrated just how much uncertainty remains around the timing of the transition—and even whether it will happen at all.

If Xi delivers on growth-boosting reforms, and his U.S. counterpart President Joe Biden is unable to push through his proposals for renewing infrastructure and expanding the workforce, forecasts from Bloomberg Economics suggest China could grab the top spot—held by the U.S. for well over a century—as soon as 2031.

But that outcome is far from guaranteed. China’s reform agenda is already languishing, tariffs and other trade curbs are disrupting access to global markets and advanced technologies, and Covid stimulus has lifted debt to record levels.

The nightmare scenario for Xi is that China could follow the same trajectory as Japan, also touted as a potential challenger to the U.S. before it crashed three decades ago. A combination of reform failure, international isolation and financial crisis could halt China before it reaches the top.

Another possibility—enticing to the skeptics—if China’s official GDP data is exaggerated, the gap between the world’s biggest and second biggest economies may be larger than it appears, and closing at a slower pace.

Throughout this report, we refer to the nominal dollar level of GDP—widely viewed as the best measure of economic strength. On the alternative purchasing power parity measure—which takes account of differences in cost of living and is often used to measure quality of life—China has already claimed the top spot.

Over the long haul, three factors determine an economy’s growth rate. The first is the size of the workforce. The second is the capital stock—everything from factories to transport infrastructure to communication networks. Finally there’s productivity, or how effectively those first two can be combined.

In each of these areas, China faces an uncertain future.

Start with the workforce. The math is straightforward—more workers means more growth, and fewer workers means less. Here lies China’s first challenge. Low fertility—the legacy of the one-child policy—means that China’s working-age population has already peaked. If fertility stays low, it’s projected to shrink by more than 260 million over the coming three decades, a drop of 28%.

Aware of the risks, China has changed course. Controls on fertility have been relaxed. In 2016, the limit was raised to two children. This year, the government announced that three were allowed. Meanwhile, plans to increase the retirement age could keep older workers in their jobs for longer.

Even if reforms succeed, it will be hard for China to offset the impact of the demographic drag. And they might not succeed. Rules aren’t the only thing holding families back from having more children: there’s also the high cost of things like housing and education. “The reason I haven’t bought three Rolls Royces is not because the government wouldn’t let me,” wrote one netizen in response to the three-child news.

The outlook for capital spending isn’t quite so bleak—no-one expects the number of railroads, factory robots or 5G towers to shrink. But after years of breakneck growth in investment, there are plenty of signs that it now brings diminishing returns. Overcapacity in industry, ghost towns of empty buildings, and six-lane highways snaking into sparsely populated farmland all illustrate the problem.

With the labor force set to shrink, and capital spending already overdone, it’s productivity that holds the key to China’s future growth. Boosting it, most Western economists think, requires action such as abolishing the creaking hukou system (which ties workers to their place of birth), leveling the playing field between state-owned giants and nimble entrepreneurs, and reducing barriers to foreign participation in the economy and financial system.

Beijing’s industrial planners have their own blueprint—and China has a long track record of successful growth-enhancing reforms. With China only about 50% as efficient as the U.S. in how it combines labor and capital, there’s still lots of room to improve.

By 2050, Bloomberg Economics projects China’s productivity will have caught up to 70% of the U.S. level—putting it in the typical range for countries at a comparable level of development.

Will China be able to deliver on the promise—boosting growth not with more workers and never-ending investment, but with smarter workers and more advanced technology? Unfortunately for Beijing—and in contrast to the elaborately choreographed celebrations for the 100th anniversary of the Communist Party—not all the determinants of future growth are under their control.

Global ties are starting to fray. A recent Pew survey found 76% of Americans had an unfavorable opinion of China—a record high. They aren’t alone. The blame game over the origins of Covid, mounting concern about human rights in Xinjiang, and Hong Kong’s draconian National Security Law have all helped to darken the global view of China’s rise.

If ties with the U.S. and its allies continue to fray, the cross-border flow of ideas and innovations that has done so much to accelerate China’s rise will start to dry up. Beijing is already getting a sneak peak at what that might look like. Europe is backing away from a major investment agreement, and India closing the door to Chinese technology.

An elaborate exercise by economists at the International Monetary Fund found that in an extreme scenario, with China and the U.S. dividing the world into separate spheres of influence, China’s 2030 GDP could take an 8% hit—relative to a base case where ties stay stable.

A combination of stalling domestic reforms and international isolation could bring another extreme scenario into play: financial crisis.

Since 2008, China’s credit-to-GDP ratio has rocketed from 140% to 290%—with the Covid stimulus contributing the latest leg up. In other countries, such a rapid increase in borrowing has heralded trouble ahead.

Drawing on Carmen Reinhart and Kenneth Rogoff’s study of financial crises, Bloomberg Economics estimates that a Lehman-style meltdown could push China into a deep recession followed by a lost decade of close to zero growth.

There are also widespread doubts about the reliability of China’s official growth numbers. The country’s own leaders have acknowledged the problem. GDP data is “man-made,” current Premier Li Keqiang said when he was the head of Liaoning province. For a more reliable read, he preferred to look at the numbers for things like electricity output, rail freight and bank loans.

A study by economists at the Chinese University of Hong Kong and University of Chicago suggested that between 2010 and 2016, China’s “true” GDP growth was about 1.8 percentage points below what the official data suggested. If China is in fact already on a slower growth path, overtaking the U.S. becomes harder.

Not on Biden’s Watch

“That’s not going to happen on my watch,” Biden said when he was asked about China’s ambition to take the global top spot. “Because the United States is going to continue to grow.”

For the U.S., as for China, the path to faster growth lies through expanding the workforce, upgrading the capital stock and innovating on technology. Biden’s infrastructure and family plans represent trillion-dollar down-payments on doing just that. By lifting U.S. growth onto a faster track, they could delay China’s ascendency.

Drawing all these strands together, Bloomberg Economics has constructed scenarios for the outcome of the U.S.–China economic race.

If everything goes right for China—from domestic reforms to international relations – then it could start the next decade neck-and-neck with the U.S.—and then accelerate into the distance.

It’s in Xi’s interest for the world to see that as the inevitable path. If political leaders, business executives and investment managers are convinced China is poised for pre-eminence, they have a strong incentive to get on the bandwagon—turning Beijing’s prophecy of success into a self-fulfilling one.

And Xi has the logic of development on his side. China’s 1.4 billion population is four times larger than that of the U.S. GDP per capita is currently less than 20% of the level in the U.S. It would only have to converge a little more for China to claim the top spot. China’s past development success, as well as that of Asian neighbors Japan and South Korea, suggest that shouldn’t be too tall an order.

But as the checkered history of China’s last hundred years shows, development is not pre-destined. At the 100-year anniversary the focus— understandably—is on the successes of the last forty years. In the earlier decades, the Party’s record on delivering growth was—to say the least—much less impressive. As Xi casts off the constraint of term limits and prepares for a third term as President, some fear a return of the leadership dysfunctions that blighted the earlier period of Communist rule.