Is going 'back to normal' even possible? - iWONDER 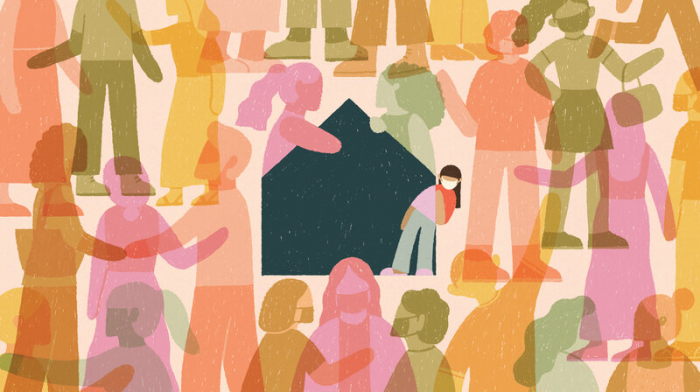 For some, things feel eerily normal – going out to the pub, seeing family and friends. But others may never feel settled again.

Despite how tenuous the state of the world remains, in some ways, life is starting to snap back into pre-pandemic normalcy in countries with high vaccine rates, like the US and UK.

Major sport events are reopening to capacity crowds, indoor restaurants are bustling, people are going on maskless dates and air travel has nearly rebounded to pre-pandemic levels. The best part? It’s all with the blessing of national health agencies (for vaccinated people, at least).

And yet,  for many, the idea of getting on a packed plane to fly and visit elderly relatives for a holiday filled with hugs seems horrifying. It’s so far from what we’ve grown accustomed to over the last year and a half. Even if you’re vaccinated, it might feel near impossible to revert back to ‘normal’, as though nothing ever happened.

Why is it, amid a mostly re-opened world, that some of us still feel scared and hesitant to embrace the ‘normal’ lifestyle we all craved as we were shut up in our own homes for more than a year? Experts say that for confronting anxiety in general, some people opt for a more gradual approach, and that the post-pandemic age will be no different. And even though some permanent social effects of Covid-19 are unclear, many people will get to that feeling of ‘normal’ – eventually.

The scars are real

Fear and trepidation around returning to normal in the Covid-19 era is called ‘post-pandemic anxiety’ or ‘re-entry anxiety’. Health-care practitioners around the world have begun to address and treat the issue. Part of confronting that anxiety means confronting the reality of what happened over the last 16 months.

As of this writing, nearly 4 million people across the world have died from Covid-19. For their loved ones, ‘normal’ might feel like it may never come. And many of those who haven’t suffered traumatic losses are also reeling, struggling with ‘long-haul’ Covid symptoms that endure for months. Additionally, more 100 million people have lost jobs during the pandemic, another trying factor.

So, it’s no surprise that many are finding the pandemic’s effects are indelible. In the US, the Centers for Disease Control and Prevention found in December 2020 that 42% of Americans suffered from depression or anxiety – a huge increase from the 11% that was recorded prior to the pandemic.

“We’re never going to forget it. The human brain is kind of an additive organ – we add things to it, but we don’t subtract,” says Kevin Larkin, professor of clinical psychology at West Virginia University, US. “We’re not going to forget that experience we went through, but we can control our behaviours going forward,”despite the hardships we’ve collectively endured.

So, it can take effort to find the will and comfort to resume the simple pleasures of reading a book in a café or embracing a friend – no matter how much you long for the hallmarks of life, circa 2019.

Still, although it’s seemingly simple to attend an outdoor sporting event when health officials say it’s OK to do so, some people seem to be having an easier time entering the fray.

Larkin likens resuming a pre-pandemic lifestyle – or tackling anything that produces anxiety – to people who either dip their toe hesitantly into a cool pool, or people who hold their breath and dive right in. “Some people choose to ease into the water – and then other people prefer to get on a diving board and get in headfirst,” he says.

In this way, re-entry into post-Covid-19 society isn’t different from overcoming any other anxiety-inducing situation. “Social phobia, snake phobia, OCD – they’re all different types of anxiety disorders that are characterised by developing habits to try and minimise the anxiety,” adds Larkin. “Usually, it’s avoidance.”

That’s why he says most of his patients take the ‘dipping’ approach. This process, called ‘habituation’ – getting used to something that addresses your anxiety – can be both emotionally and physically uncomfortable, which is why people do it slowly, or don’t do it at all. It’s similar to cognitive-behaviour therapy (CBT), a common treatment for obsessive-compulsive disorder, which involves gradually exposing the patient anxiety triggers, to the point where they can live with them.

Of course, exposure isn’t possible for high-risk and unvaccinated people: “it’s kind of like diving into the deep end of the pool and you don’t know how to swim – there’s actual danger there,” says Larkin.

But for those who are vaccinated, risk tolerance is a factor. “Some people might bounce back and go to the stadiums and the football games and so on – but other people will be more cautious,” says Stephen Taylor, professor and clinical psychologist at the University of British Columbia, Canada, and author of The Psychology of Pandemics.

Plus, says Taylor, ‘going back’ to normal can seem nebulous and unclear, especially as different countries are still at different stages of the pandemic, which can make even vaccinated people even more cautious.

“Pandemics are messy in how they end, and the ending is sort of arbitrary,” says Taylor. “The WHO will announce one day that we’re entering a post-pandemic period, but what does that mean? The coronavirus is still around, infecting and killing people, but the rates are low enough that it’s OK to open up the economy.”

Generalised anxiety, and the future

Anxiety aside, people are venturing back out – both dippers and divers.

A 29 June poll from market-research firm Ipsos showed that two-thirds of Americans hung out with friends and family, or went out to eat at a restaurant, while only one-third of Americans did some form of social distancing during the same week. Does that mean the general sense of fear and unease that’s permeated society since Covid-19’s outbreak will eventually disappear for good?

Taylor says that there will be some people who “will never return to normal” – including those lost a loved one, or even lost a job, marriage or home. However, Taylor believes that this group will be the minority; he says most people won’t have any problem “eventually” reverting to normal. He says that was especially the case with the 1918 Spanish flu – that it “was essentially forgotten”, at least at a governmental or institutional level.

While countless individuals were traumatised, “there was very little societal impact of the Spanish flu. It’s really hard to find the psychological residue over the past century due to the Spanish flu,” says Taylor. Even with more recent pandemics like H1N1, precautions like face masks “were rapidly abandoned” in Western countries.

For now, if you’re feeling apprehensive with re-entry anxiety, “break it down into steps with something that feels easier and do it, even though it feels scary”, says Shari Steinman, assistant professor of psychology, and Larkin’s colleague at West Virginia University. “Don’t go to a crowded ball game on day one – start with playing catch with a friend.”

It’s still too early to pinpoint Covid-19’s society-wide psychological effects. For now, the process is individualised.

“Everybody is on their own journey, getting to the same place,” says Larkin. “I think that people are going to take it at their own pace – and there’s not a right or wrong pace.”