French president will use 'Armenian' card in any manner to raise electoral sympathies, says Russian expert 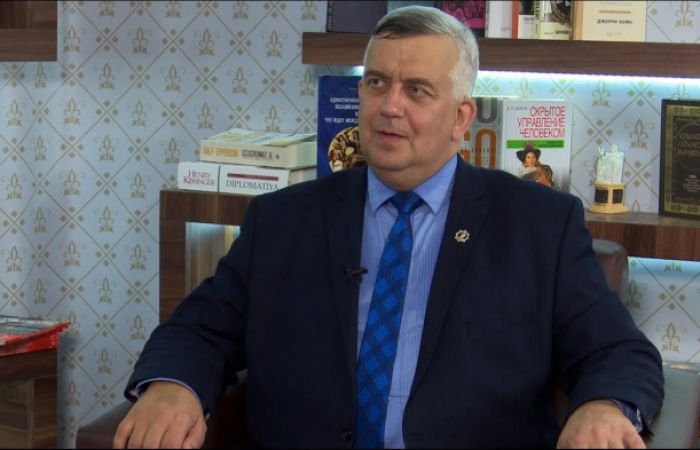 "Official Yerevan, not without recommendations from Moscow and Paris, increasingly loudly and insistently demands the resuscitation of the ‘corpse’ of the OSCE Minsk Group,” Kuznetsov said. “By doing this, it seeks to prevent the opening of the Zangezur transport corridor, as well as legitimize, at least in the form of discourse, the presence of the unarmed remnants of the Armenian army on the territory of Karabakh, which is temporarily under the control of Russian peacekeepers."

According to the political analyst, the growth of the collective Armenian-French activity was also assumed for a very long time.

“Next spring new presidential election is to be held in France, and President Macron has recently been haunted by constant foreign and domestic political failures,” he noted. “His support rating is at the level of about a quarter of the voters, which is quite serious for a really multi-party France, but for a guaranteed victory in the election Armenia may become a bright white or golden spot of success for Macron against the general gray or even black background of political failures.”

“Therefore, in order to raise his own electoral sympathies, he will use the ‘Armenian’ card in every manner, to the mutual pleasure of him and Pashinyan,” Kuznetsov added.

“It’s Macron who, using his status as President of France, supports himself at the expense of Armenia and Pashinyan on the eve of the upcoming presidential election or re-election in a little more than six months since one and a half million votes of French Armenians and the financial and organizational resources of the Armenian diaspora will be very useful to him,” he further noted.

“It’s quite concretely possible to say that President Macron has already begun campaigning in his support, and the French diplomats subordinate to him, to the extent of their strength, intelligence, abilities and connections, help him in any manner in this issue,” Kuznetsov pointed out.

“Macron in all his clashes with the Eurasian world has suffered defeats more than once. He wants very much to be a world-class politician, at least in words,” the political analyst said. “Therefore, I’m not sure that any sane person will consider any pro-Armenian initiatives of Macron by no means as French, and not even pro-Armenian, but exclusively as Macron's initiatives.”

Kuznetsov noted that Macron understands this, but he’s now standing before the dilemma of the need to improve his image in the eyes of the French people and the risk of being publicly disgraced once again. “Therefore, I’m almost sure that he won’t make sharp and obvious gestures in favor of Armenia, so as not to be booed like a mediocre actor, but instead will make several exquisite gestures in favor of Yerevan, behind which there will be no concrete aim."

“As to the sharp boost in the Armenian-French activity in the context of the visit of the European Council’s head Charles Michel to Armenia and the announced intention to allocate 2.6 billion euro for official Yerevan’s support via the EU, it looks somewhat grotesquely phantasmagoric,” Kuznetsov further said.

“Firstly, 2.6 billion euro is a huge amount of money, equal to ten annual budgets of Armenia,” he pointed out. “This country in its current state, speaking in the language of Marxism, doesn’t have sufficient productive forces to channel this huge amount of money into commodity production in order to create surplus value for profit from the subsequent sale of a commodity product in foreign markets.”

“In Europe and the US, Armenian goods aren’t needed in principle, while in Russia and other CIS countries, the surplus of Armenian goods just won't’ be sold,” the analyst also added.

“I don’t exclude a scenario in which a part of the EU money will go to the creation of a 'black box' for the election campaign of Emmanuel Macron," summed up Kuznetsov.