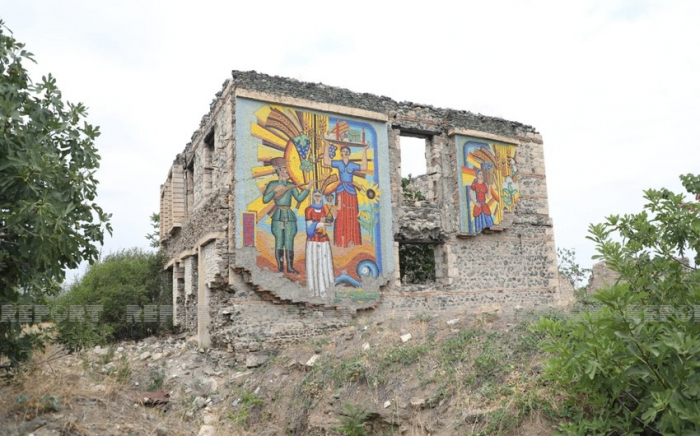 Journalists from Brazil, Colombia, Mexico, and the UK could see all the destruction with their own eyes. They visited the Juma (Friday) Mosque in Aghdam, got acquainted with the consequences of Armenian vandalism - the destroyed buildings of the Bread Museum and the Drama Theater, visited the Imaret complex, which houses the palace of the founder of the Karabakh Khanate, Panahali Khan.

After visiting the ruined remains of the Agdam Drama Theater, a Mexican journalist, Canal Once anchor Federico Lamont said that they reminded him of what he saw at the Peace Memorial Museum in Hiroshima.

"Armenians stole Azerbaijanis' land and destroyed everything that was on it. Those who committed these crimes must be tried and convicted not only by UNESCO for the destruction of cultural monuments but also in The Hague. This would restore historical justice," Lamont said.

Foreign journalists were also informed about the work on the restoration of the city. Currently, the city plan is being prepared. After its approval, a tender will be announced. About 100,000 people are expected to live in the restored Aghdam. The total area of ​​the city will be about 1,750 hectares, of which 862 hectares will be for buildings, 334 hectares for parks and open spaces, 530 hectares for streets and avenues.

Modern infrastructure will be built in Aghdam according to the "smart city" concept. The city will be provided with eco-transport, including a tram line and about 79 km of bike paths. Four large parks, 23 city parks will be established; in general, the "green" zone will make up 20 percent of the city's territory. However, the priority at the current stage is the restoration of historical sites with the help of the Azerbaijani Ministry of Culture.