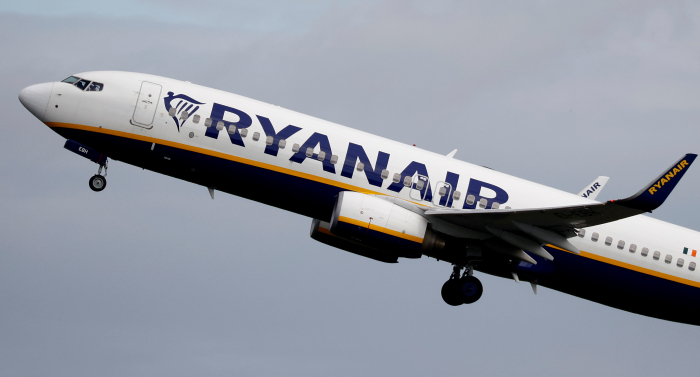 Ryanair on Monday reported a widening of losses for the three months to the end of June, due in large part to the coronavirus travel restrictions in Europe, AzVision.az reports citing Daily Sabah.

That compared with a net loss of 185 million euros a year earlier for the Dublin-based carrier that flies mainly throughout Europe.

The loss came in slightly better than the 283 million euro loss forecast by a company poll of analysts.

“COVID-19 continued to wreak havoc on our business during the first quarter with most Easter flights canceled and a slower-than-expected easing of EU government travel restrictions into May and June,” Ryanair chief executive Michael O’Leary said in the company’s earnings statement.

Europe’s largest low-cost carrier said it expected to fly between 90 and 100 million passengers in its financial year to end-March 2022, up from an earlier forecast of 80-100 million.

Ryanair flew 27.5 million passengers in the year to March 2021, down from a pre-COVID-19 peak of 149 million the previous year.

O’Leary said that it remained impossible to provide a meaningful profit forecast for the financial year to end-March 2022, but reiterated that the airline was cautiously expecting to post a small loss or break even.

The airline expects to fly 9 million passengers in July, at the top of a previous forecast range of 7 million-9 million, rising to 10 million in August, O’Leary said.

The airline, which faces a web of overlapping COVID-19 travel restrictions across Europe that has hamstrung the industry, said it expects a “strong recovery” in the winter and next summer as rivals cut back on capacity.

“We are encouraged by the high rate of vaccinations across Europe,” O’Leary said.

“If, as is presently predicted, most of Europe’s adult population is fully vaccinated by September, then we believe that we can look forward to a strong recovery in air travel for the second half of the fiscal year.”

At the start of the pandemic, it had slashed 3,000 pilot and cabin crew jobs, or 15 percent of staff, mirroring moves by airlines globally to save cash in the face of collapsing demand.

The airline had in May posted an annual net loss of 1.0 billion euros as the pandemic grounded the global aviation sector and ravaged travel demand.

Ryanair, which has one of the strongest balance sheets in the airline industry, said it had cash reserves of 4.06 billion euros, up from 3.15 billion at the end of March following a 1.2 billion euro bond sale in May.