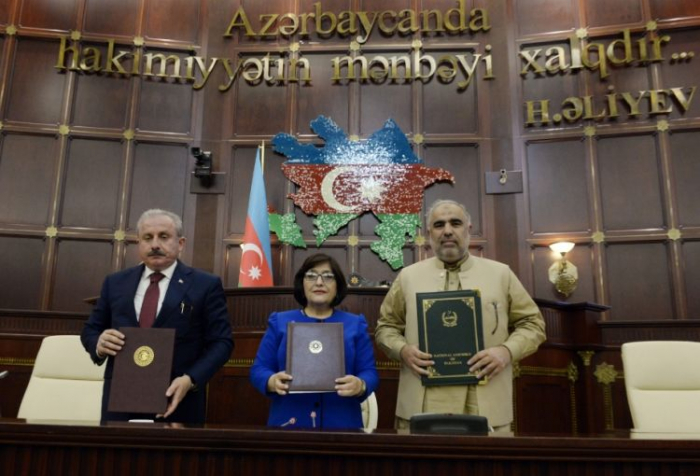 The first trilateral meeting of the Azerbaijani, Turkish and Pakistani parliament speakers was held at Milli Majlis of Azerbaijan which vividly reflected true spirits of brotherhood, fraternal relations, caring & sharing among the three brotherly countries. It was indeed a giant step towards further strengthening of bilateral & trilateral relations in terms of economy, political consultation, public diplomacy, commercial diplomacy and last but not least cultural & education cooperation in the days to come.

At the end of the first trilateral meeting a joint declaration named Baku Declaration was also signed which covered all aspects of parliamentary cooperation, regional security, socio-economic integration and greater regional connectivity.

Speaker of Milli Majlis Sahiba Gafarova said that the document would contribute to the strengthening of strategic relations among the countries. Thus it is the first giant step towards the realization of long awaited dreams of sustainable bilateral relations under the flagship of Trilateral Strategic Dialogue comprising of Azerbaijan, Turkey and Pakistan.

Even the Chairman of the Turkish Parliament Mustafa Shentop said that the Baku Declaration signed between Azerbaijan, Turkey and Paksitan, will contribute to ensure the regional security. In this connection, rapidly changing geopolitical and geostrategic scenarios urgently demand a functional apparatus to deter the ill designs of enemy forces of regional peace and stability. Thus trilateral meeting of the Azerbaijani, Turkish and Pakistani parliament speakers seems to be right step, in right direction on right time which has multiplier effects and strategic dividends in the days to come. Hopefully Baku Declaration will play an important role in terms of institutionalizing trilateral relations.

It will further enhance spirits of friendship, and brotherhood among Turkey, Pakistan and Azerbaijan, by stating that the first meeting of the speakers of the parliaments of Azerbaijan, Pakistan and Turkey will be held in Baku on the initiative of Islamabad.

On his part, Speaker of the National Assembly of Pakistan Asad Qaiser highly appreciated the establishment of a trilateral format of cooperation between the parliaments of Azerbaijan, Pakistan and Turkey. He emphasized that we must expand our cooperation in the cultural, economic, educational, and other fields.  He reiterated Pakistan’s support to Azerbaijan and congratulated the Azeri authorities on their great victory in the patriotic war.

A 14 member multiparty parliamentary delegation led by National Assembly Speaker Asad Qaiser attended the first trilateral meeting of the speakers of the parliaments of Azerbaijan, Pakistan and Turkey. The formation of the trilateral platform was an idea of Ms Gafarova and it was endorsed by the speakers of Pakistan and Turkey as a symbol of close and cordial relations between the three countries.