How to cool a city struggling with heatwaves - iWONDER 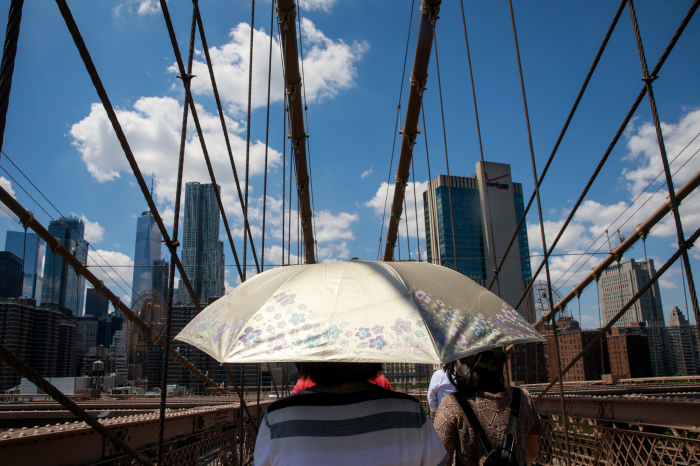 Tokyo has deployed a suite of measures to help people cope with the heat this summer and its experiments could provide some lessons for other cities trying to manage sweltering temperatures.

The heat of the Tokyo pavement is compounded by the Sun's reflection off high-rise apartment buildings and stores. A large group of overheated office workers rush by in suits and ties, drenched in sweat and panting heavily. Their daily lunch trip to the local convenience store a mere block away feels more like a marathon thanks to the sweltering heat.

Any local will attest that Tokyo is hot during the summer, reaching its peak in the humid months of July and August. In 2019, there were reportedly 162 deaths across Japan due to suspected heat-related illnesses after an extreme heatwave in the summer while in 2018 thousands of people were hospitalised in record temperatures that were declared a natural disaster by the country's weather agency.

The Tokyo 2020 Olympic Games kicked off with the opening ceremony on 23 July and run through until the Paralympics ends on 5 September, with just two weeks between the two events. But despite the uncertainty created by the Covid-19 pandemic, the Tokyo Organising Committee has been developing solutions to help athletes and members of the public cope with the high temperatures they are likely to encounter this year.

Although spectators are abscent from the Tokyo Olympics due to the pandemic, many of the technologies and ideas developed ahead of the Games could find wider applications in helping cities stay cool during heatwaves.

This is not the first time Japan has hosted the Summer Games, with the first held in 1964. However, the previous Games took place in mid-October, making the management of Tokyo's hot summer climate during large scale sporting events unprecedented.

And it is not just the outdoor events causing concern. Indoor facilities also need to manage the heat while being conscious of the environmental issues that might arise – Tokyo 2020 is aiming to be the greenest Olympics ever. So how can it meet the challenges of a sweltering city without harming the environment?

Japan is no stranger to seeking out innovative solutions, but while it has come up with some intriguing ways of keeping Tokyo cool, not all of them worked out as hoped.

In September 2019, Tokyo 2020 organisers tested out artificial snow machines, in the hope that it would cool the venue being used for the rowing and canoeing events - Sea Forest Waterway. Roughly 300kg of snow was sprayed over the 2,000 seats – only half of which are covered and while it kept spectators amused, it ultimately didn’t have much of an effect on the temperature in the building, which remained at a steady 25.1C throughout the entirety of the test.

Other measures, however, have been more successful. Solar-blocking paint, for example, has been applied to various surfaces, especially those susceptible to sunlight. The Tokyo Metropoliton Government has said that the paint can reduce heat of the pavement by up to 8C. The paint, originally developed by NASA to keep astronauts cool in their spacecraft, has been used in homes for some time but not on infrastructure at the scale needed for the Olympic and Paralympic games.

The Japan National Stadium has also been built using more wood and natural resources than most modern architecture, reportedly in part to reduce heat absorption by metal. The unique design of the stadium has also been planned specifically to facilitate airflow.

Two sports getting media attention are the long distance events of the marathon and the race walk. It was announced in mid-October 2019 that due to pressure from the International Olympic Committee (IOC), the Tokyo Metropolitan Government is moving these events to Sapporo, 517 miles (832km) from Tokyo. The city, situated on the northern Japanese island of Hokkaido, is on average 5C cooler than Tokyo during the summer months and offers a less humid environment. This was almost certainly a direct response to the Doha World Athletic Championships, held in late September 2019, where 40% of marathon runners dropped out of the competition due to high temperatures.

While those who fear a repeat of what happened in Qatar might be happy to hear the move, the reception in Japan has been mixed. The Tokyo governor, Yuriko Koike said it wasn't really a choice, but rather "a decision without an agreement". Locals are somewhat frustrated, with many tickets for the events having already been purchased, and the Japanese athletes aren’t completely sold on the move.

Japanese Olympic Marathon Runner Ayuko Suzuki recognises that the IOC are prioritising the safety of competitors first, but feels the move may take away some of the home advantage for the Japanese runners.

Suzuki believes that despite the "muggy" climate, the race would have been fine in Tokyo if competitors prepared appropriately, using techniques such as cooling the palms of athletes' hands to maintain cooler internal temperatures, and hydration.

The majority of events, however, are taking place in the Tokyo metropolitan area. Many are being held at indoor arenas or sports venues, which offer comfortable spectating experiences due to air conditioning. But this heavy reliance on AC could be problematic.

Michiyo Kakegawa, an associate professor in environment, policy and management at Soka University, points to the environmental impact of synthetic chemicals like CFCs and HCFCs found in air conditioning refrigerants. "The ability of HCFCs to trap heat in the atmosphere is up to "1,810 higher than that of carbon dioxide," she says.

Takasago Thermal Engineering, for example, were chosen to install the heat management systems at the new Ariake Arena, which is hosting the Olympic volleyball and Paralympic basketball events.

One such innovation is a new type of air conditioning system called Swirling Induction Type, which pushes cool air in a spiral formation directly into the lower level spaces where people are likely to be. This spiraling air flow helps to mix the air more efficiently, reducing the amount of energy needed to cool a room by up to 40% compared to conventional air conditioning systems.

"In traditional systems, the air is circulated throughout the whole room," adds Saburi Toshikazu of Takasago's research and development centre. "[Our] technology concentrates its airflow on floor level. It is more energy efficient for buildings with tall, high ceilings."  It also helps to keep the air in a room clean by pushing unwanted dirty air to the top of rooms where it can be released outside through vents.

In order to power these massive heat management systems, some of the venues have installed solar panels to turn the energy from the sun into power for cooling. Ariake Arena, for instance is just one of several new facilities that feature a solar panel roof. While the energy collected from the building itself will be used to power some of buildings electronics, the eventual goal for the future is to create "zero energy buildings".

One plan to help keep spectators cool during the Olympics in Tokyo drew on some of Japan's more traditional means of heat management. The "uchiwa", a flat unfoldable fan, originating from China, or "sensu", a ruffled foldable fan, most often seen in Japan, are widely used by locals. There were plans to give out free fans and paper hats to spectators during the Games before the pandemic, but the Czech Olympic team has used the idea to include a sensu as part of it's official national outfit for Tokyo 2020.

Temporary misting towers have been installed at Olympic venues and are even been used to help keep the horses used in some events cool.

Slightly less traditional, but still common practice in Japan, are the use of large-scale misting machines. They are already in use at many tourist spots throughout Japan, and temporary misting towers have been installed at Olympic venues and are even been used to help keep the horses used in some events cool.

While the machines are an effective way to cool and hydrate, they are usually kept on continuously and use roughly 600-800ml of water per minute, which will increase the environmental impact of the Olympic venues.

Despite all the technology and methods involved, ultimately the issue of managing heat will come down to individuals.

Local weather service Weathernews has quantified the levels of shade, wind movement, and hot zones in Tokyo in the lead up to the Games. This information is available on request to any participating nation's team.

Acclimatising top-level athletes to unfamiliar and adverse conditions has long been in practice by coaches. Cyclists and runners often try to mimic factors such as altitude, humidity and temperature, during practice runs. They sometimes stimulate this through artificial means, like wearing extra layers of clothing, or going into a sauna after training sessions. Team sports, like American Football are also known to use such tactics, like dunking footballs in ice baths during practices to get used to catching and throwing in rain.

Competitors and referees have also been making use of equipment such as cooling vests that contain ice blocks or phase changing gels to absorb some of the heat. The US team even wore uniforms designed by Ralph Lauren at the opening ceremony that featured an inbuilt cooling system the fashion brand claims can wick away heat from the athlete's skin.

For those without the luxury of expensive cooling technologies and months of aclimatisation, staying cool in a hot city like Tokyo means being careful and searching out shade.

"You can't just spend all your time in a cold air-conditioned hotel room and suddenly go to an extremely hot environment at an event," says Weathernews' Kazuo Asada. Going from a cool environment, to a scorching sidewalks can shock your body and potentially lead to adverse heat-related illnesses, such as heat stroke.

Asada advices placing the palm of the hand or soles of the feet in cool water as this can help to rapidly decrese body temperature.

While running a marathon or sprinting in the extreme heat is unlikely to be a common challenge, as more and more cities struggle with heatwaves due to climate change, there could be some lessons from this year's Olympics – Tokyo is a resilient city, having survived typhoons, earthquakes and wars, and if it's one thing the city has learned, preparation is key.