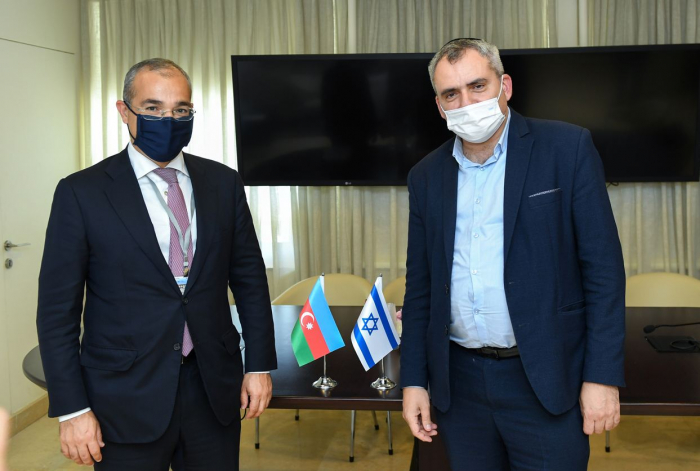 The Azerbaijani Ministry of Economy is carrying out the relevant work, the database and cooperation are being expanded to intensify the activity of the joint Azerbaijani-Israeli commission, Azerbaijani Minister of Economy Mikayil Jabbarov said during a meeting with his Israeli counterpart Yair Lapid, AzVision.az reports.

Jabbarov informed Lapid about the Alat free economic zone, the foundation of which was laid in July 2021, and invited the Israeli side to invest in various spheres of the Azerbaijani economy.

The friendly ties between the two countries based on mutual respect and trust were stressed at the meeting.

The cooperation between Azerbaijan and Israel is based not only on economic partnership, but also on historical and cultural roots.

Jabbarov stressed that the visits and meetings of the heads the two countries are of particular importance in creating an atmosphere of trust between Azerbaijan and Israel.

The Azerbaijani minister stressed that Israel has always supported Azerbaijan both during the 44-day Karabakh war and after the war. The various events were organized in support of Azerbaijan in connection with the Armenian aggression.

Moreover, Jabbarov held a meeting with Minister of Construction and Housing of Israel Ze'ev Elkin, during which they discussed the prospects for strengthening bilateral economic relations, new opportunities for cooperation, encouraging investments, exchanging experience in the non-oil sector and the process of restoring the Azerbaijani territories liberated from the Armenian occupation.

Israeli ministers highly appreciated the opening of Azerbaijan's trade mission in Israel, stressing that it will become an important platform for expanding partnership, ties between business circles, promoting a business dialogue, creating new opportunities for strengthening cooperation and contributing to the development of such spheres as agriculture, ICT and tourism.